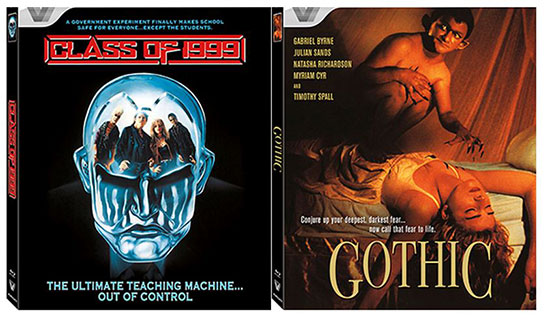 The time is the future, and youth gang violence is so high that the areas around some schools have become “free fire zones” into which not even the police will venture. When Miles Langford (Malcolm McDowell), the principal of Kennedy High School, decides to take his school back from the gangs, robotics specialist Dr. Robert Forrest (Stacy Keach) provides “tactical education units.” These human-like androids have been programmed to teach and are supplied with weapons to handle discipline problems. These kids will get a lesson in staying alive!

Synopsis: Five famous friends spend a hallucinogenic evening confronting their fears in a frenzy of shocking lunacy and horrifying visions in this fictional tale, which tells the story of Mary Shelley’s conception of Frankenstein on one debauched night in Lord Byron’s home.