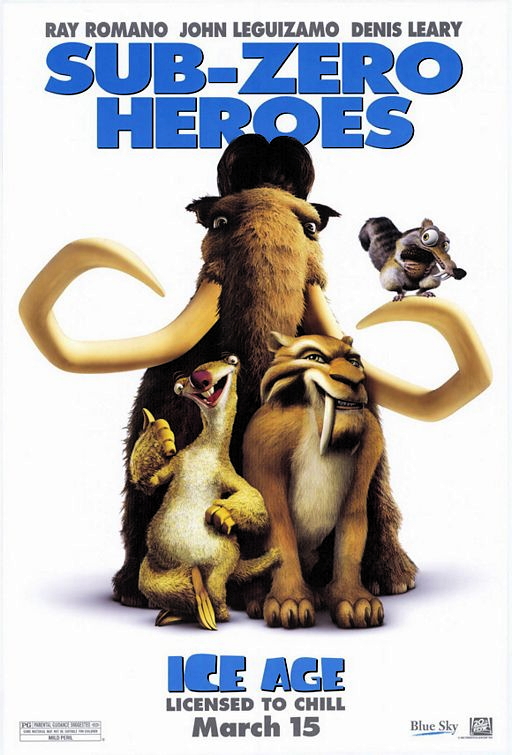 “20,000 years ago, our planet was entering an ice age. All kinds of animals begin immigrating to the south, seeking more warm climates. Sid, a sloth who never stops talking is left behind sleeping while everyone else begins the journey to the south. Awaking, he meets Manny, a mammoth who travels to the north, and decides to follow him. When a humans camp is attacked by tigers, a woman takes her baby and jumps on a river. Before she drowns, the baby is rescued by Manny and Sid. The two animals decide to search for the father and return the baby to him. Diego, one of the tigers that attacked the humans, comes also claiming the baby.” (courtesy IMDB)

Boasting one of the funniest opening sequences of any animated film ever – in which a nervous squirrel attempts to bury an acorn with earth-shattering results – the simply conceived and gorgeously realised Ice Age (2002) is easily one of the best and most adult-accessible animated adventures this century. While Disney’s mega-budgeted Dinosaur (2000) set the prehistoric scene with an equally inspired prologue (one surviving egg journeys through several predicaments via the flight of a pterosaur, before ending up on a far-away island populated by lemurs) it failed to deliver on its opening promise, instead lapsing into saccharine philosophising by a bunch of bland characters. The first major animated venture from 20th Century Fox since the disastrous failure of Titan A.E. (2000), Ice Age avoids such similar traps by never aspiring to be more than what it actually is, an exquisitely animated kids comedy anchored by the buddy-system ingredients that have become today’s recipe for success – Toy Story (1995), Shrek (2000), Monsters Inc. (2001), etc. 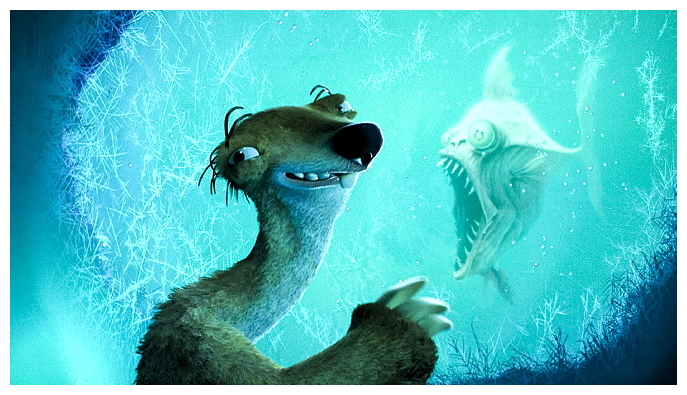 Having missed the mass migration south to warmer climes, a moody mammoth named Manny (Ray Romano beat James Earl Jones and Ving Rhames to the role), a goofy looking sloth named Sid (John Leguizamo learned that sloths store food in their mouths, which is why Sid speaks the way he does) and a vengeful sabre-tooth tiger named Diego (Denis Leary) form an unlikely alliance when they rescue a drowning Neanderthal infant. The altruistic trio then embark on an eventful journey to return the tiny tot to his tribe. After encountering several misadventures on their way, they reach a cave with several cave paintings made by humans. There Sid and Diego learn about Manny’s past and his previous interactions with the human hunters, in which his wife and child were killed, leaving Manny a depressed widower. The next day, our heroes approach an ambush previously organised by Diego, who has since changed his mind and confesses to Manny and Sid. 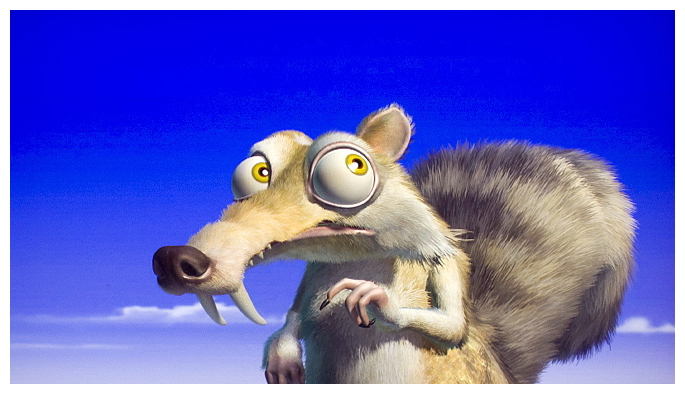 Our heroes battle the pack of sabre-tooth tigers but, despite their efforts, the pack corner Manny. As they close in for the kill, Diego sacrifices himself by jumping in the way and is injured as a result. Manny and Sid mourn for Diego and continue their journey without him, eventually returning the human child to its tribe. If this were Disney, the underlying motif of social outcasts bonding to overcome adversity would be less than subtle but Ice Age, with its brisk 78 minutes duration, has neither the time nor inclination for the denser issues confronting prehistoric fauna. It’s more concerned with staging elaborate obstacles for our heroes to surmount (like a a precipitous crumbling bridge of ice over a river of liquid magma), offering sly references to popular culture, combining striking 2-D animation for the primitive cave painting flashback sequence, or simply content to revel in its own innate sense of fun. On DVD especially, the vibrant detail, texture, depth and clarity invested by the Blue Sky Studios animation team ensures that Ice Age virtually leaps off the screen. 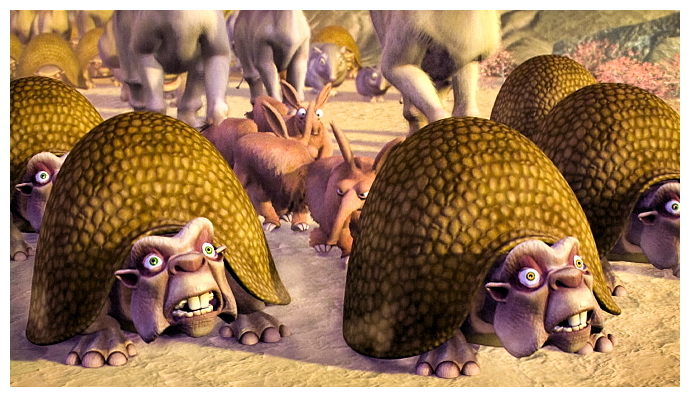 Would you believe it was originally written to be a heavy drama? Fox demanded a comedy suitable for children, so Blue Sky Studios took that direction, but kept the drama aspect a notable element of the movie. Ray Romano refers to the movie as a ‘dramedy’ – both drama and comedy – and director Chris Wedge agrees wholeheartedly. While a voice cast of veteran comedians adds further levity to the proceedings (the actors were encouraged to improvise as much as possible to help keep the animation spontaneous) the most memorable denizen of this frozen farce is a peripheral player called Scrat, the aforementioned apprehensive squirrel. Wedge plays the voice of Scrat (combination ‘squirrel’ and ‘rat’) but has no intelligible dialogue. Scrat’s opening adventure was inserted because, without it, the first real snow and ice sequence wouldn’t take place until about 37 minutes into the film. This was the only role intended for Scrat, but he proved to be such a popular character with test audiences that he was given more scenes and appeared in the sequels. 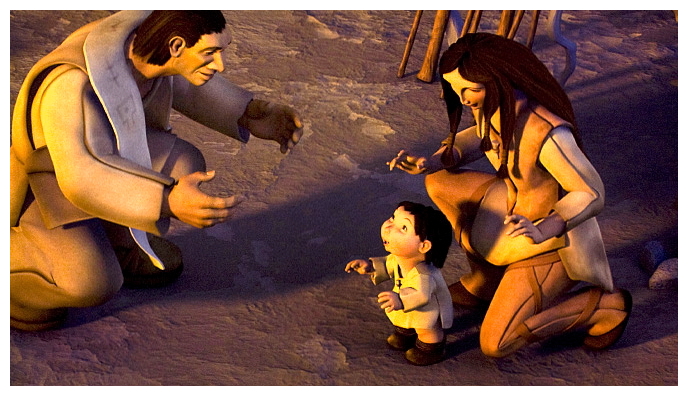 Having left an indelible imprint on the film from the very first scene, Scrat’s abortive attempts to stash his acorn provides a delightful running gag that further consolidates Ice Age’s position as one of the coolest family flicks ever. The DVD I viewed recently was predictably crammed with extras and inventively cute menu designs. While animation supplements tend to be tailored with the younger viewer in mind, they’re often still technobabble-rich affairs and Ice Age is no exception, offering tidbits like, “The hand-drawn 2-D approach would best contrast the pseudo-realistic 3-D aesthetic dominating the other sequences…” But for the budding animator or graphic artist they can be a treasure trove of insider information and designer tips. The technical stuff kicks off with multi-angle animation progressions (from storyboards and 3-D layout to un-rendered and final render animation) exploring the opening sequence, the lava flow and the sabre-tooth attack. The Making Of Ice Age is a twenty-minute exploration of the production from genesis to completion, and there’s also a behind-the-scenes publicity featurette containing the obligatory voice-recording sessions and input from the stars. 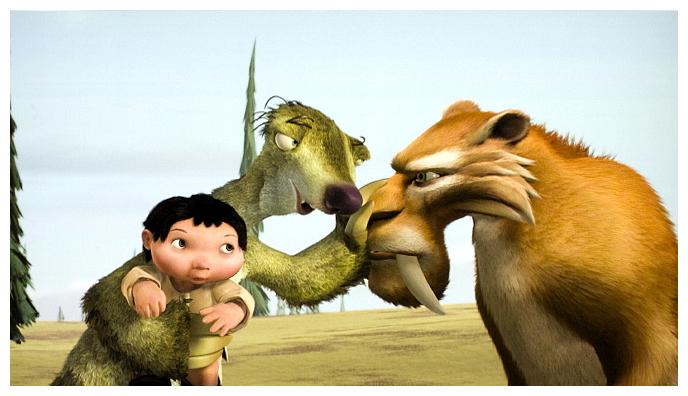 A further series of area-specific featurettes include The Art Of Rigging (binding the geometry of a character to a skeletal rig to refine movement), From Paper To Screen (character modelling), Animators Acting (balancing voice and character to establish emotional truth), The Art Of Effects (physics in the cartoon world), Lighting & Materials (defining material properties), Using 2-D In A 3-D World (the cave painting sequence), and Sid Voice Development (John Leguizamo self-indulgence). If that’s still not enough, a reasonably thorough commentary track from directors Chris Wedge and Carlos Saldanha should fill in any blanks. Six deleted scenes with optional commentary reveal a dropped subplot involving a she-sloth named Sylvia who wants to hook up with Sid and settle down, extensive Design Galleries come with a bonus that allows you to determine the sequence of stills, plus three trailers. For the youngsters there’s Sid On Sid, a commentary clip by the sloth star, The Science Behind Ice Age provides educational factoids, and a selection of foreign language clips. But the pick of the supplement is undeniably Gone Nutty (2002), a spectacular four-minute solo outing for our favourite squirrel-rat who also features in three cute (but pointless) Fox logo reveals. 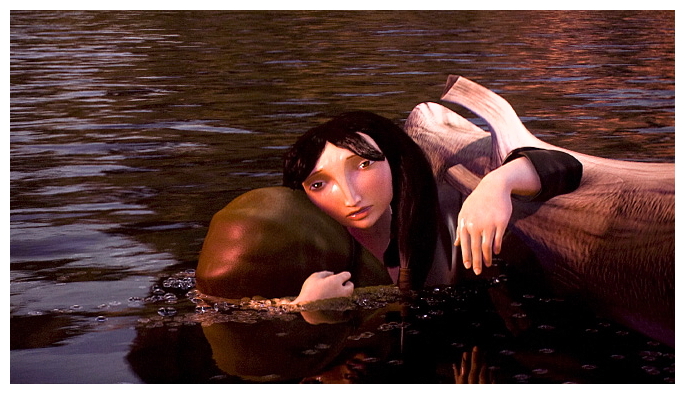 Written by Michael J. Wilson and directed by Chris Wedge and Carlos Saldanha (replacing animation maestro Don Bluth who shortsightedly refused to work with computers and walked off the project) the film was met with positive reviews and nominated for an Oscar for Best Animated Feature. Taking almost US$400 million at the box-office (the eighth highest grossing film of 2002), it kickstarted a franchise with four full-length sequels to date: Ice Age: Meltdown (2006), Ice Age: Dawn Of The Dinosaurs (2009), Ice Age: Continental Drift (2012), Ice Age: Collision Course (2016) and a number of short films (about five minutes each) including No Time For Nuts (2006), Surviving Sid (2008), Scrat In Love (2009), Scrat’s Continental Crack-Up (2010), Cosmic Scat-tastrophe (2015), and there’s still no end in sight! And it’s with that dread prospect in mind that I’ll make my farewells and politely ask you to attend again to behold next week’s mind-bendingly horrifying instalment of the nicest site around…Horror News! Toodles! 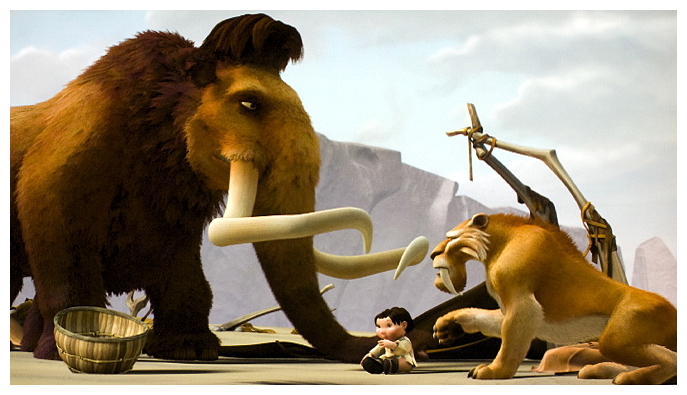 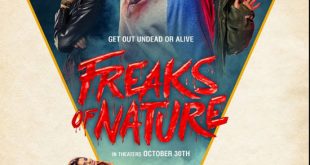