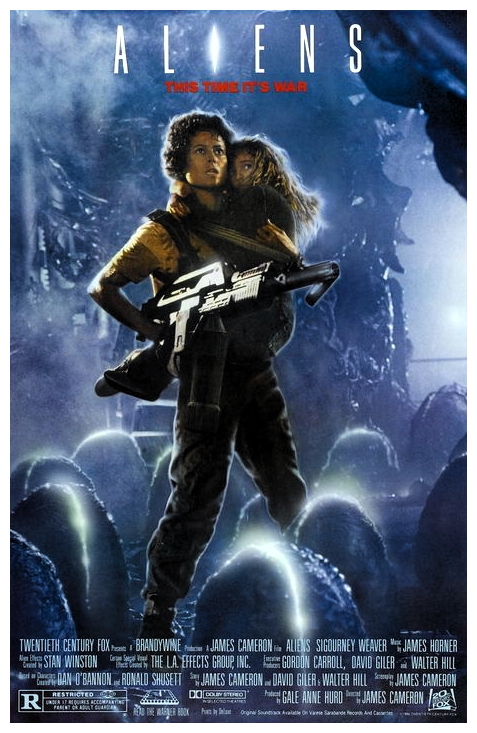 “Ellen Ripley, the sole survivor of the alien attack on the mining ship Nostromo, awakens half a century later when she is found by a salvage ship. The welcome given to her by the company officials is far from warm, since they refuse to believe her discovery of alien existence and strip her off her flight officer’s license. Ripley also discovers, much to her horror, that the moon LV-426 where her crew had encountered an alien species for the first time, is now colonised by the company. But when all contact from the moon is lost Ripley is called back into action again as an advisor to a team of tough space marines with lots of firepower. To get rid of her recurrent nightmares about the alien creature, Ripley prepares for a final battle with the monsters – and this time, there are hundreds of them out there.” (courtesy IMDB)

The history of the Alien film franchise begins, would you believe, back in 1939 with the publication of the story Black Destroyer by A.E. Van Vogt in Astounding Science Fiction magazine in July of that year, and was re-published in 1950 as part of his novel The Voyage Of The Space Beagle. The low-budget monster movie It! The Terror From Beyond Space (1958) utilised the story without permission which, in turn, inspired filmmaker Dan O’Bannon when writing the script for Alien (1979). Even though it combined many elements from O’Bannon’s first film Dark Star (1974), similarities with the original story proved too many, and 20th Century Fox paid an out-of-court settlement of US$50,000. The resulting film gets better as the years go by. Stylish direction by Ridley Scott disguises the B-grade origins of the screenplay about a carnivorous monster loose on a spaceship. Realistic performances add much to the terror, and the alien created by surrealist H.R. Giger is extraordinary and original, being based on one of his earlier paintings. Oscar-winning special effects are top-notch, with an additional nod going to designer Ron Cobb. Hugely entertaining, suspenseful and gory, Alien quickly became a genuine classic of modern genre cinema. 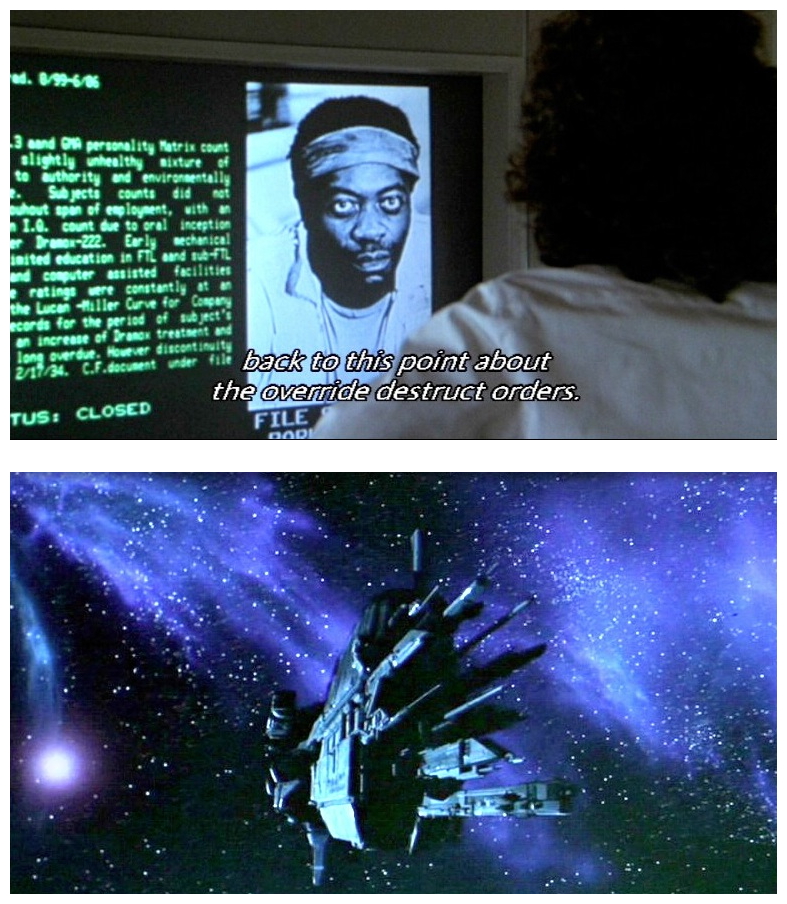 Common wisdom suggests that at the root of each cinematic franchise, there must always be a strong and unique original. More frequently however, the second film, the sequel, turns out to be the one that proves the staying power of a particular cinematic vision, cements its world and characters in the popular imagination, and truly initiates the series. Examples of such sequels include The Bride Of Frankenstein (1935), Magnum Force (1973), The Empire Strikes Back (1980), The Wrath Of Khan (1982), Back To The Future II (1989) and The Matrix Reloaded (2003). While considering the possibility of a sequel for Alien, Brandywine productions – Walter Hill, David Giler, Gordon Carroll – came across James Cameron‘s script for The Terminator (1984). Brandywine have been extremely careful in choosing their directors, always wanting to give new, promising filmmakers a shot at a big-budget Hollywood film (Scott, Cameron, David Fincher, Jean-Pierre Jeunet, and writers like William Gibson, Vincent Ward and Joss Whedon). 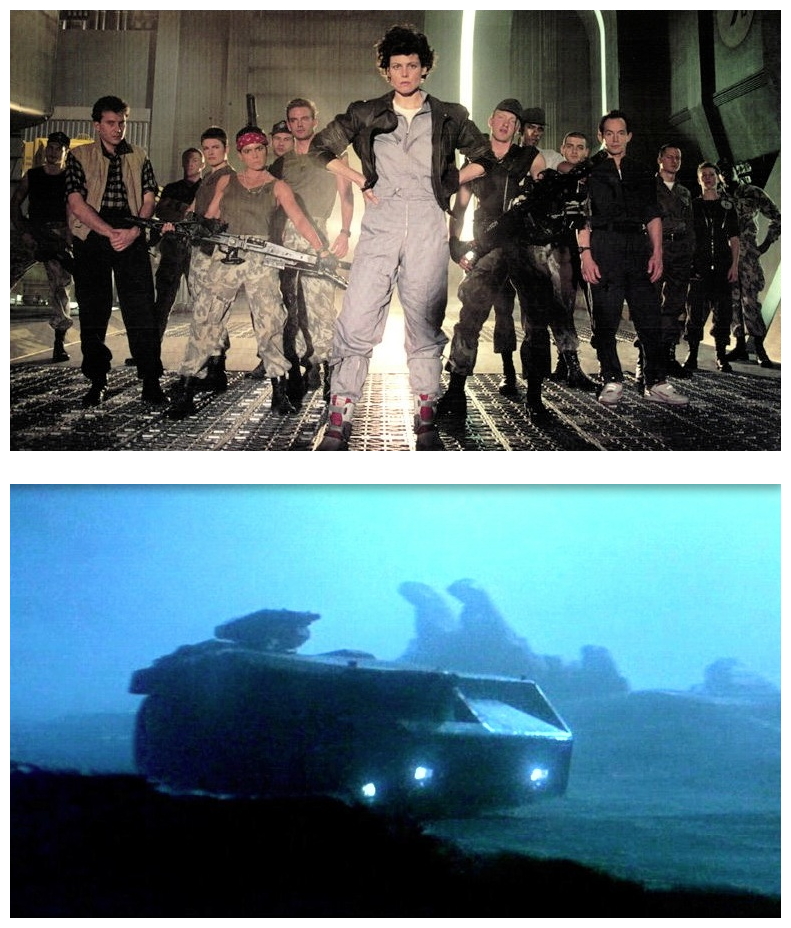 Cameron is a fastidious director who prepares his movies with an intricacy that goes a long way towards explaining their remarkable box-office appeal. His later blockbusters – The Abyss (1989), Terminator 2 Judgment Day (1991), True Lies (1994), Titanic (1997) and Avatar (2009) – often contain something more than mere surface characterisation, and this comes as a most welcome innovation in that most inhuman of vehicles, the mega-budgeted studio-dominated Hollywood hit. With Aliens (1986) Cameron not only initiated a phenomenally successful franchise with a total of eight (four if you’re a purist) films so far, but also helped shape the action-adventure genre that, since the mid-eighties, dominated the global box-office until the post-millennial shift towards fantasy. One of cinema’s greatest sequels, Aliens starts with the first film’s sole survivor Ellen Ripley (Sigourney Weaver) being recovered in her escape spacecraft. The snag is it’s 2179, fifty-seven years later and, besides having a terrible time explaining what happened to the Nostromo, Ripley is appalled to learn that the site of their disastrous discovery (planet LV-426) has since been colonised. 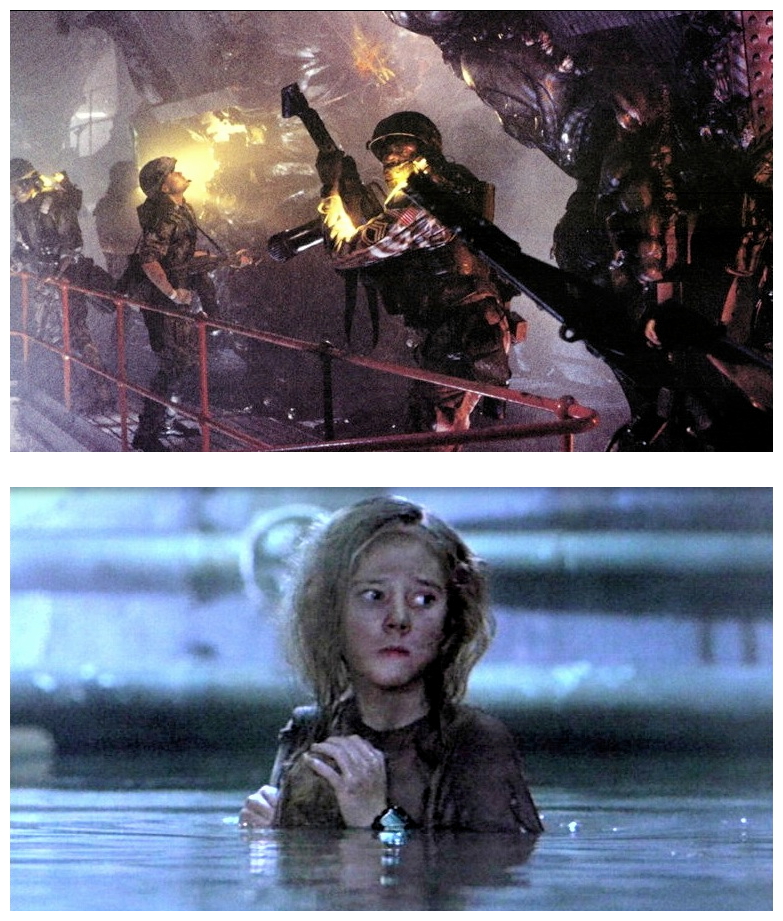 Inevitably something bad happens to the colony, and the traumatised Ripley is sent back with an untrustworthy company man named Burke (Paul Reiser) and a team of swaggering marines (including Cameron favourites Michael Biehn, Bill Paxton, plus Jenette Goldstein‘s terrific tough cookie Vasquez) and another ambiguous android, this one named Bishop (Lance Henriksen). A dropship delivers the team to the surface of LV-426, where they find the colony deserted. There are makeshift barricades and signs of a struggle but no bodies, and a traumatised sole survivor, a little girl named Newt (Carrie Henn), who used the ventilation shafts to evade capture. The marines find the colonists cocooned, serving as incubators for alien offspring. When the marines kill a newborn alien, the other aliens are roused and decimate the marines. The survivors, including Ripley, Newt, Burke, Vasquez and Bishop, barricade themselves inside the colony command centre, where they learn that the power plant will soon explode with the force of a forty megaton bomb. 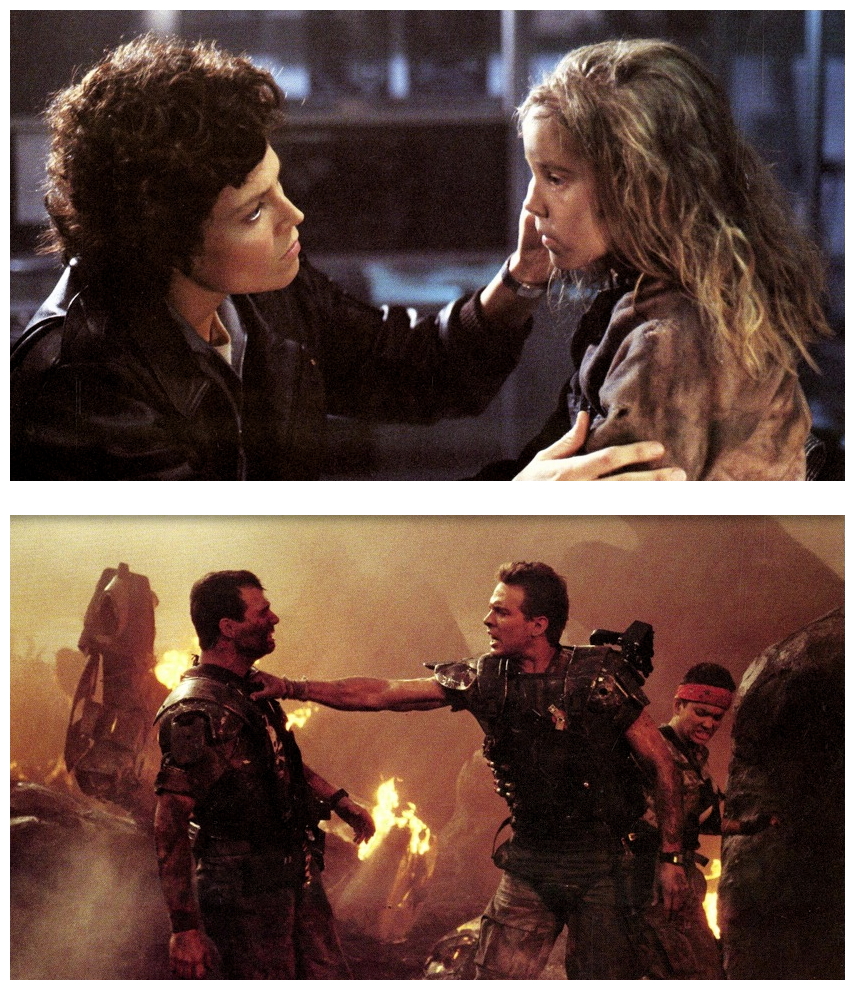 Despite its formulaic progeny, Aliens proves that one director’s idiosyncratic vision can mesh serendipitously with the spirit of the original as well as the changing times. Cameron sustains the look of Scott’s quietly creepy original which, in a startling paradigm shift, had broken with the symmetrical white interiors of Stanley Kubrick‘s 2001: A Space Odyssey (1968). True to Scott’s original, and similar to the Terminator films, the sequel’s sympathies lie with the working-class characters. But Aliens is a loud and fast film with skilfully orchestrated action sequences – If Alien was a ‘Haunted House In Space’, then Cameron’s relentless, furiously intense thrill-ride (winning the franchise’s second Oscar) is a ‘Fort Under Siege In Space’ with the dwindling band beset by an implacable multiplicity of Giger’s formidable acid-blooded extraterrestrial as well as the gigantic mother of the species. When Ripley, freshly awoken after 57 years of hypersleep, revisits and overcomes the first film’s traumatic experiences, Cameron has transformed Scott’s gothic heroine into the proverbial eighties action babe. 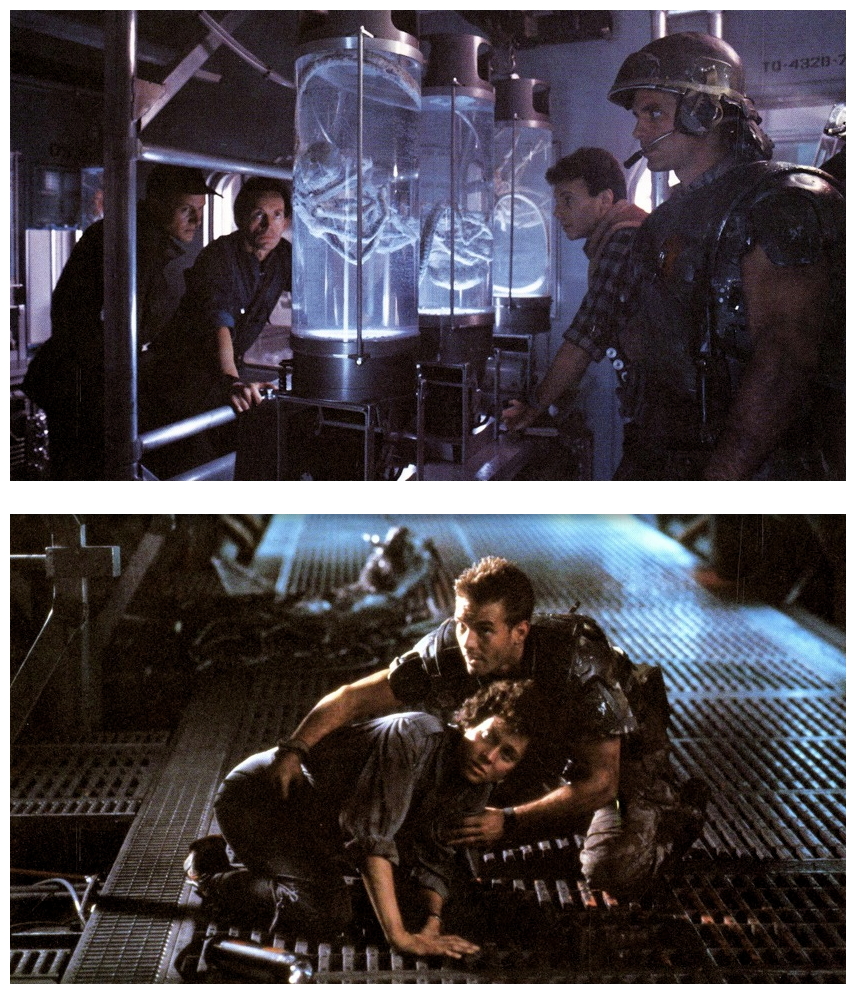 Fully armoured, her pumped-up physique decked out with guns and ammunition, Ripley is that ambiguously gendered creature that, like Sarah Connor (Linda Hamilton) in the Terminator films, issues the post-feminist challenge to all men: Can you measure up? Despite their initial swagger, the marines’ mission reminds us of the catastrophically humiliating Vietnam War experience that the Ronald Reagan administration was so eager to erase. Another reason Aliens did so well was the production quality and evidence of a well-spent budget. Cameron and his producer-partner Gale Anne Hurd both learned their craft under independent filmmaker Roger Corman and utilised many of the master’s cost-cutting techniques. When 20th Century Fox executives watched an early cut of the film, they complained that it looked like all the money had been spent on sets rather than special effects. Hurd took great delight in admitting that many of the sets were actually miniatures, optical effects or rear-projection. For instance, they could only afford six hypersleep capsules at US$4,300 each, but clever placement of mirrors and camera angles made it look like there were twelve. 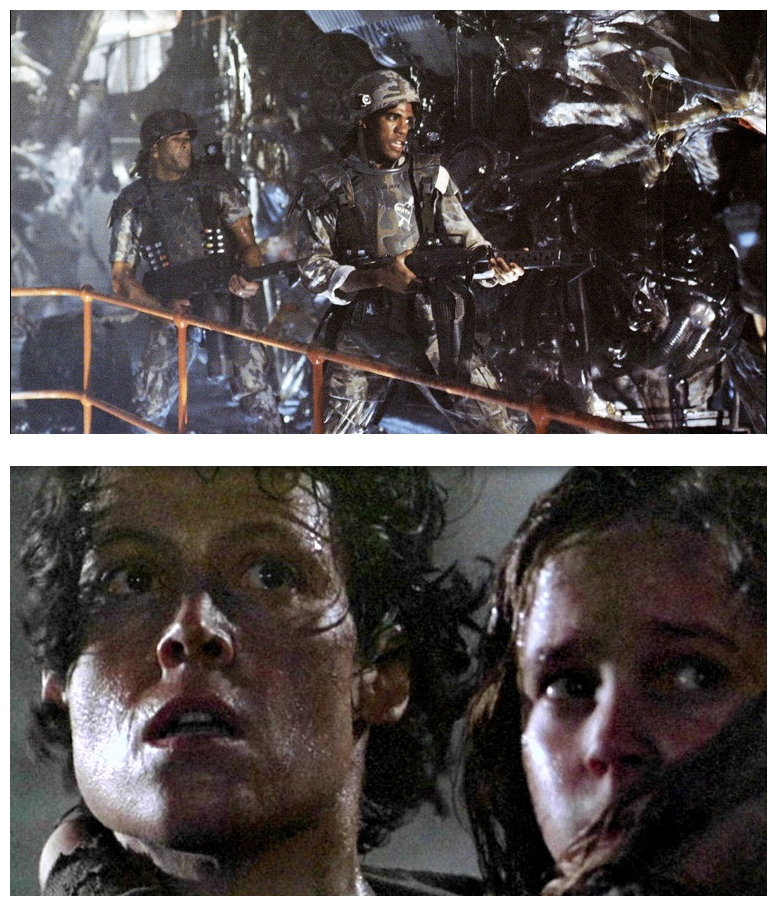 Cameron and Hurd worked together on Corman’s Battle Beyond The Stars (1980) and brought many of their favourite co-workers on board, including effects artists Dennis Skotak, Robert Skotak and Alec Gillis, photographer-writer Randall Frakes, and composer James Horner. For Battle Beyond The Stars, Corman insisted on a score that sounded like Jerry Goldsmith‘s soundtrack for Star Trek The Motion Picture (1979) and Horner delivered in buckets. Paramount executives were so impressed by what was essentially a rip-off, they hired him to score Star Trek II The Wrath Of Khan (1982), eventually leading Horner to becoming one of Hollywood’s most famous composers ever, winning two Oscars for his efforts before his death in 2015. When I first saw Aliens, I was a little disappointed by Horner’s soundtrack, finding it derivative and uneven, but it turns out there was a good reason for this. Cameron had given him so little time to write the score, he was forced to cannibalise previous soundtracks he had composed, including elements of both The Wrath Of Kahn and Star Trek III The Search For Spock (1984), a bit of Goldsmith’s original 1979 score (near the climax), and a version of the Gayane Ballet Suite by Aram Khachaturian, familiar to any fan of 2001: A Space Odyssey (1968). 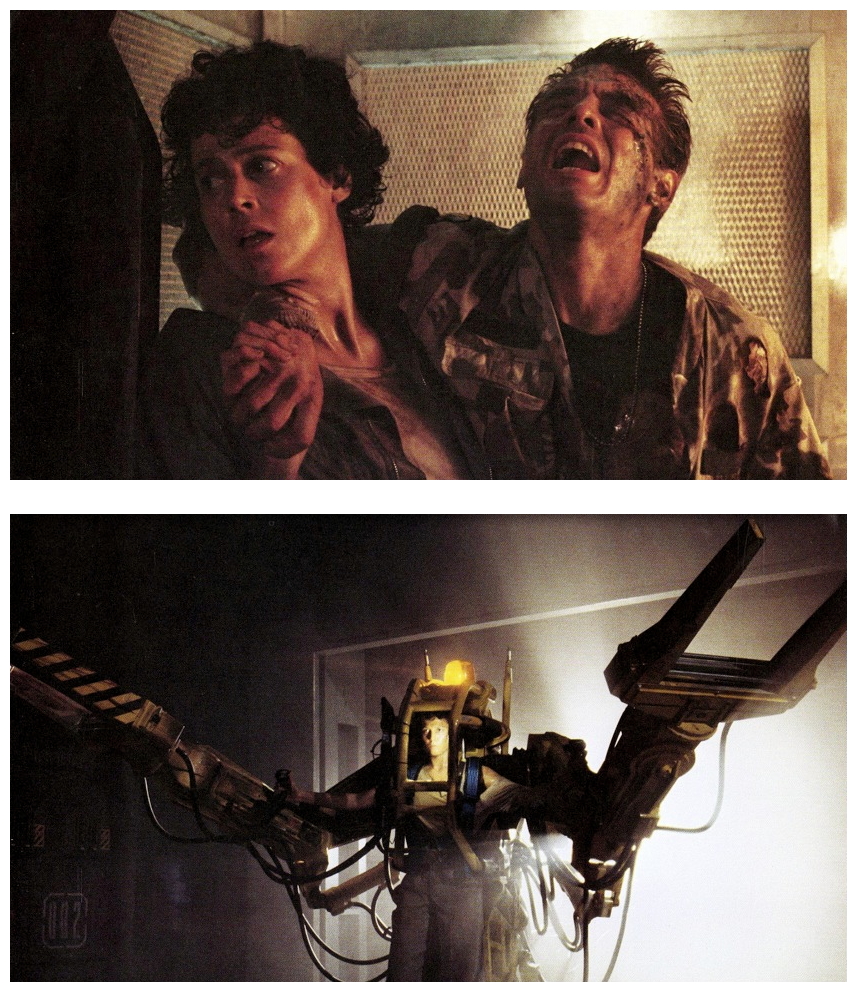 Horner’s schedule only allowed for him to work on the film for six weeks. He arrived in London only to find that they were still shooting, and had to wait for three weeks before he could get started. He delivered a finished score which didn’t sit well with the edited film. Because Horner was working on another film at the time, Cameron had to chop-and-change the score to make it fit. Some of the sound effects were created with a Fairlight, an early Australian-made digital sampler. Even though it sampled at only 8-bit resolution, it was considered state-of-the-art back then, and cost about US$30,000. Aliens received near-universal critical acclaim, and critics have remained mostly positive over the years. James Berardinelli: “When it comes to the logical marriage of action, adventure, and science fiction, few films are as effective or accomplished as Aliens.” Marjorie Baumgarten called it, “A non-stop action fest,” and Playboy magazine ranked it #6 on their list of Sequels Way Better Than The Original. Like the other films in the franchise, there have been various versions released on DVD and Blu-ray with myriad special features and commentaries, and the director’s cut adds about seventeen minutes without ever getting dull. And it’s with this thought in mind I’ll ask you to please join me again next week to have your innocence violated beyond description while I force you to submit to the frightening terrors of…Horror News! Toodles! 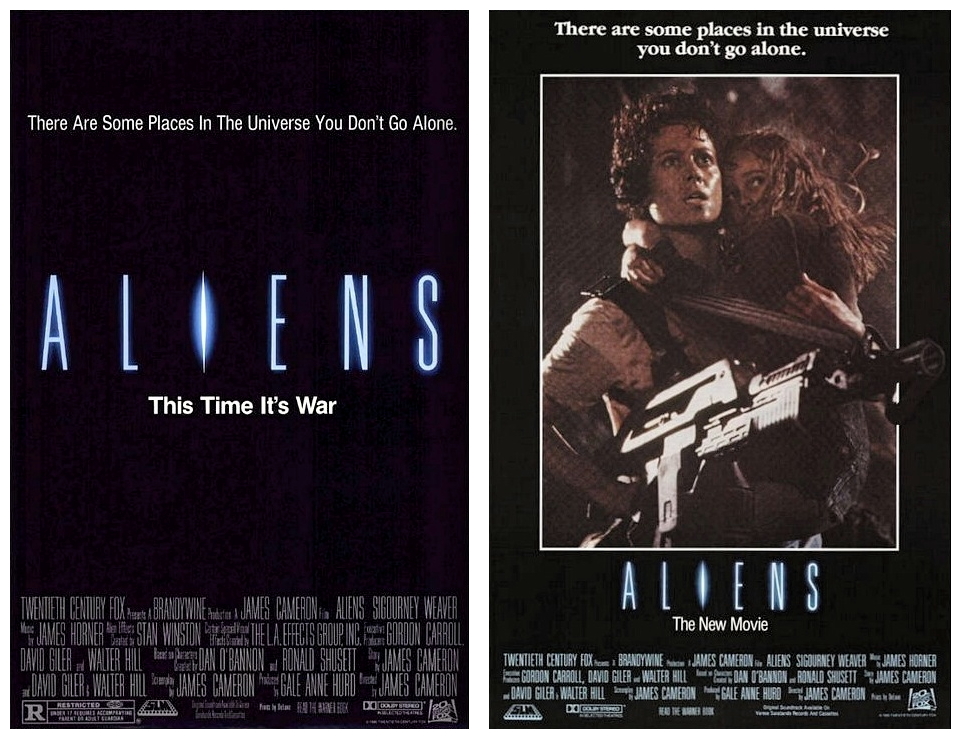