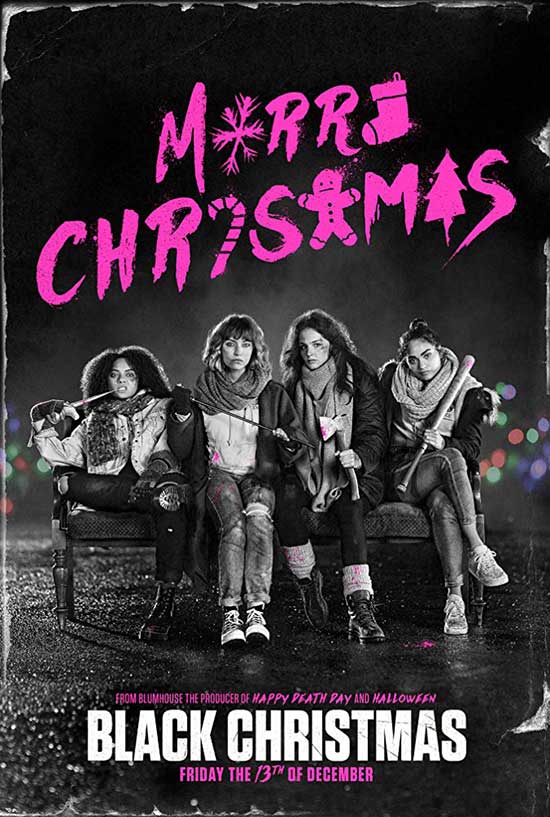 “A group of female students are stalked by a stranger during their Christmas break. That is until the young sorority pledges discover that the killer is part of an underground college conspiracy.

Directed by Sophia Takal, Black Christmas 2019, brings the Mu Kappa Epsilon sisters together. We first meet Lindsay (Lucy Currey). We see a man following her, Lindsay preps her keys in her fingers to use as a weapon. The man following her crosses the street and she turns around in a flash prepared to gouge out eyes.  she becomes the first victim. As the killer drags her away, the snow angel she made as she was being attacked now looks like a fallen angel.

There is a hooded, what looks like a masked man and he gets her. We meet the group of strong-willed, modern. I suppose, sometimes this is why people want to remake classic but you still can never get that once and done incredible moment that is stuck in time, thanks to film. Riley (Imogen Poots who does a great job in the movie.) The flashbacks reveal Riley was attacked by Brian Huntley, a frat guy

The sorority is working on a Christmas show with a Mean Girls flare. There is a catch to this talent show. The girls are singing a song written by Riley and it is about the “rape” culture of fraternities/sororities. Riley was attacked by Brian Huntley (Ryan McIntyre). She has a few flashback moments to show what happened.

Hawthorne College is not what it seems. There is always some kind of nasty business happening somewhere.

There is statement here. The girls perform Riley’s song about consent and it doesn’t go over well with the guys. These ladies put up with a lot. They prepare for the “orphans’ dinner.” With Christmas break in full effect and some kind of killer lurking around. People still need to eat. So, they prepare for the dinner and the repercussions of Riley’s song. There are parties and the ladies are all getting threatening DM’s. Riley tries to tell a security guard who seemed more interested in whatever he was doing. 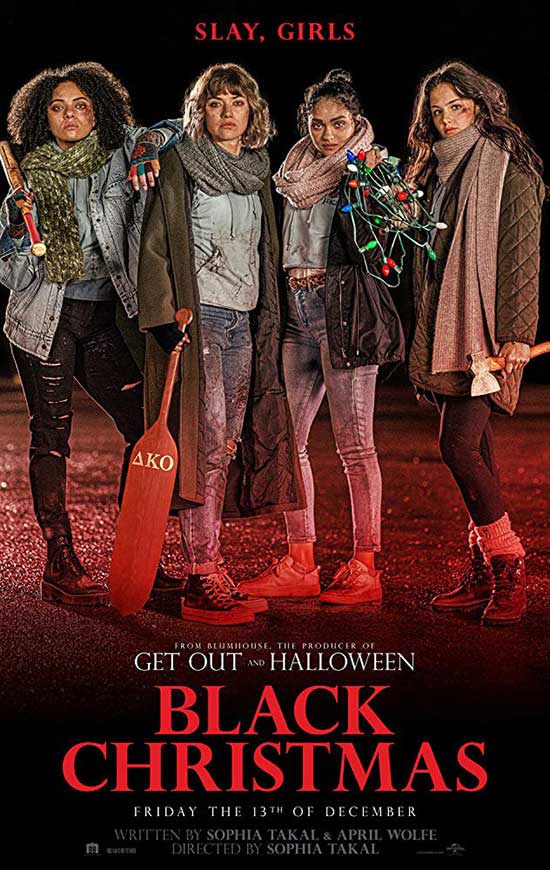 Ben Black (Phil McIllaney), Gil (Mark Neilson), Nate (Simon Mead) are some of the fraternity brothers. We get to see a little bit of the preparations for the dinner and we meet Landon (Caleb Eberhardt.), he is the Derek to Riley’s Sidney Prescott.

Imogen Poots does a great job playing Riley. There is a quiet tension in the film that shows Riley and Kris sort of butting heads while handling situations. Riley may be trying to find her voice and save herself and her friends.

Jesse (Brittany O’Grady) is off to find some Christmas decorations in the dark attic. So, the same masked man that killed Lindsay is now killing/stalking the rest of the MKU members.

The fraternity guys have discovered that a bust of the founding father of the fraternity possesses some kind of power. Professor Gelson (Cary Elwes) is a bit smug. The misogynistic behavior of the guys was felt through the movie.

The sorority sisters wind up banding together after Riley finds herself in trouble. Those frat guys are involved in some major stuff. The professor also winds up getting Landon to pledge to the dark side. But he does snap out of it. Overall, you can never take away from something original. I suppose they took some of the slasher aspects, Riley kicked some butt, they started to “fight” again in a good way. There is a battle, weapons involved, bloodshed. 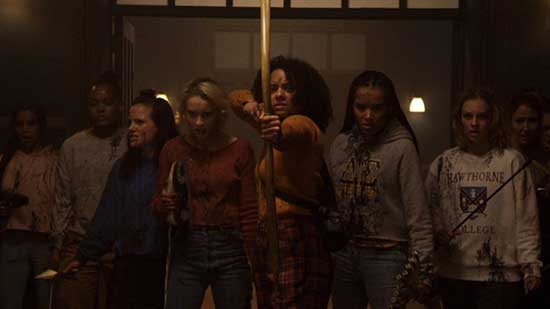