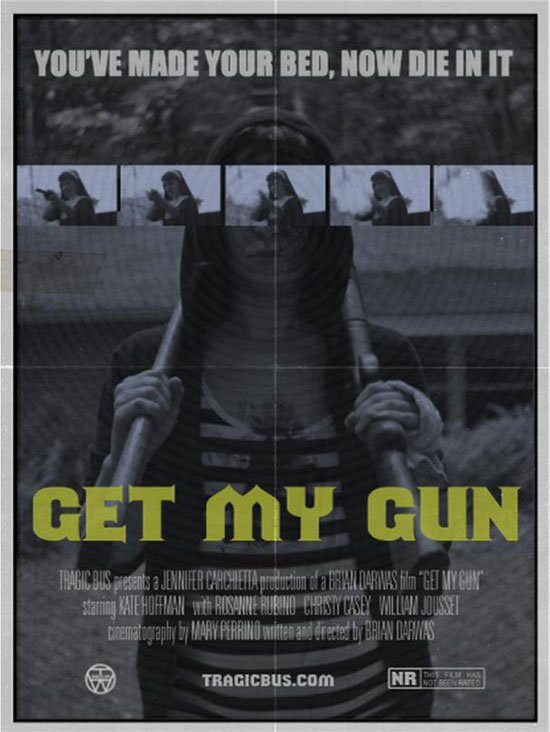 After an innocent prank leaves Amanda pregnant and out of a job, she finds herself on the verge of motherhood and the target of a psychotic stalker who will stop at nothing to get her hands on the unborn child.

To label Brian Darwas a first-time filmmaker isn’t exactly accurate. While Get My Gun is his first feature-length fictional film, his resume already includes a number of hot rod documentaries (Three Mile, The Road to Bonneville, and a few others) and a couple Roger Miret-involved music videos (for both Agnostic Front and Roger Miret and the Disasters). Now, director/writer Darwas and co-writer/executive producer Jennifer Carchietta have become one of the more exciting new filmmaking teams in the current wave of underground exploitation films. Their first entry into the genre, Get My Gun works as both a knowledgeable, loving, respectful homage to the drive-in films of yesterday and as a fresh new take on our favorite genre standards. 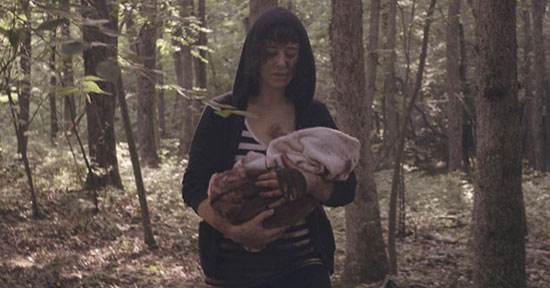 No time is wasted setting the table; we jump right in just as dessert is being served. A nun is pushing a small child on a swing when she notices a man doing some landscaping work nearby. We don’t know who these characters are yet, but when she grabs the child, runs to a phone, and tells whoever she called, “Get my gun,” we can guess that this man has done her some form of wrong. She tricks him into coming closer, then pushes him into her trunk, drives him to a secluded area, and begins torturing him. It’s at this point that the audience starts to feel comfortable with the knowledge that they have been given a big enough clue as to how the rest of the story unfolds.

However, this intro scene is just a sneak peek of the final act of the film; when we start at the beginning and move forward, we realize there is a completely unexpected twist to this storyline that changes the “rape revenge” game and takes us in a completely different, shocking direction.

Get My Gun features a handful of relatively unknown actors in the lead roles. Don’t let that fool you, the acting is pretty strong across the board. Kate Hoffman plays Amanda, the main character (and the nun in the intro), a likable, very unlucky woman who works in housekeeping at a shady motel. She doesn’t like her job, but it improves slightly when she has to train the new girl, Rebecca (Christy Casey). They hit it off and quickly become friends, their jokes and playful pranks back and forth helping make the work go by easier.

Unfortunately, when Rebecca innocently pranks Amanda by taking a “Do Not Disturb” sign off a door, and it turns out there’s a man (the one from the beginning, played by William Jousset) sitting quietly in the room, things take a violent turn. Amanda is attacked, beaten, raped, and slashed across the face. She loses her job, and to make things even worse, when we move into Chapter 2 of the film, we find Amanda very pregnant and at a crossroads in her life: does she keep the baby, or look to adopt it out to a loving home? She meets a potential adoptive parent for her baby, a well-to-do doctor named Catherine (Rosanne Rubino), but the silver lining to this cloud is quickly scraped away to reveal an even darker storm ahead, and the second half of this film sees the brutality turned up to 11. 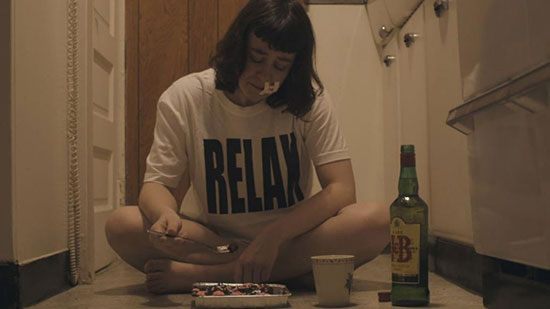 There are a number of reasons why this film is so successful in what it sets out to do. Not only are the characters played well by the actors, as I mentioned before, but they are also well written.

We care about Amanda and feel horrible for what happens to her, enough so that when the plot doesn’t instantly delve into the expected Thriller: A Cruel Picture territory, we are patient and willing to give it room to develop, a generosity that is rewarded as the story unfolds. In part, it is this very deviation from the expected plot that helps Get My Gun work so well. Instead of just another version of I Spit on Your Grave with different faces on screen, we end up more in the realm of Ms. 45 by way of Bustillo and Maury’s Inside, with a touch of 1980s suspense/thriller sprinkled in along the way.

This is an intelligent exploitation film that still feels very low budget/ DIY without purposely sacrificing quality in order to “look the part.” Jousset’s character is able to get across that he is evil and sadistic without swearing gratuitously or looking like a caricature of a psychopath. Darwas and company didn’t have to bend over backward to make their film look gritty and torn up (unlike certain Weinstein-backed filmmakers in the late 00s who spent millions to make their film look low budget); instead, they clearly put their heart and knowledge into what they loved and created something that we, their intended audience, can now return the love for. 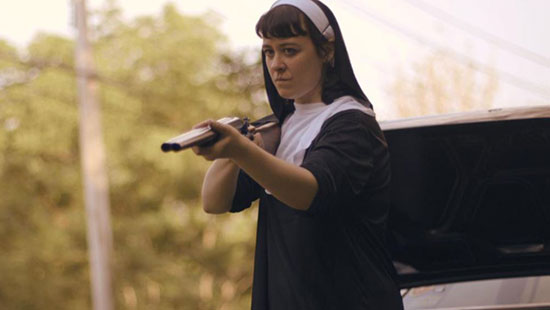 Get My Gun isn’t just one of the best movie titles in a long time; it’s a must-see film for anyone who appreciates the exploitation films of yesterday and likes a bit of intelligence to go along with their violence and bloodshed.