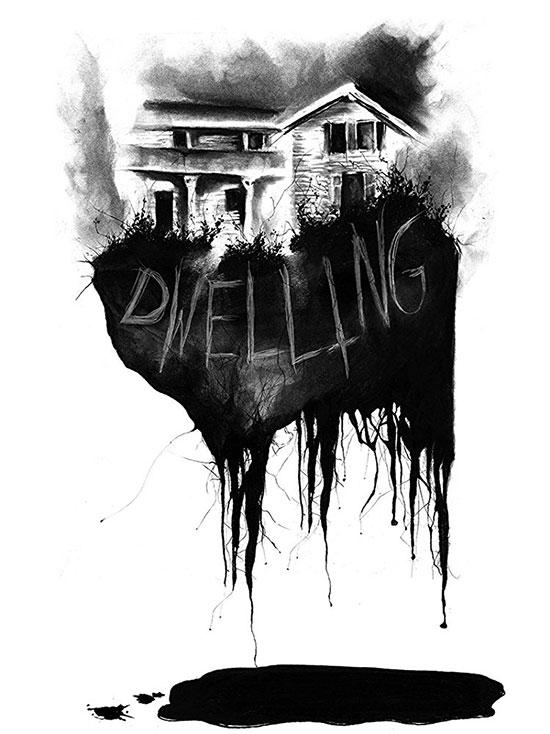 A young couple deliberately moves into a haunted house to contact the other side. Until their conduit, a painted black mirror proves to contain a malevolent presence hell-bent on bringing harm to their new family.

It’s always a refreshing sojourn for me, as a reviewer, to head back to that old chestnut formula of the spiritually possessed house with a dark, murderous history. To get a chance to see all the tried and true elements: rustic and cobweb festooned structure, lengthy and flashback-riddled narrative detailing the gory fun that happened within its walls, an odd townsperson or real estate agent who warns of doom for any who decide to live there, and the innocent victims-to-be who move in anyway because they either seek more adventure than a five-star hotel can give or their looking for a way into the spirit world to find answers to a mysterious tragedy that befell them. The latter is the plot contrivance du jour for Dwelling, a stylish but frustratingly mixed bag 2016 debut effort by director Kyle Mecca for BeWildered Media Productions.

The only diverting twist to the standard family besieged by otherworldly horrors while residing in the ubiquitous old, dark house is that they have sought said mystery manse on purpose. The wife, Ellie, and her sister River saw their mom apparently drowned by a creature/killer in her own bathtub. The incident drove River into an institution and has plagued Ellie ever since. What no one foresees is that the new abode contains a floor mirror that harbors another malevolent presence who targets the new tenants. Yet Ellie persists in remaining, even as hubby and their little niece are assaulted by the entity.

Normally such a contrivance as the protagonist caring less about her family than she does solving a mystery would invite the moviegoer to have a certain detachment feeling for the character rather than the sympathy crucial to becoming invested in their plight. Credit Mecca, serving as writer in addition to director, for presenting this as a flaw in Ellie’s mental makeup, making her all-too human and a shade less heroic. Far from the usual stock-type of squeaky clean nobles often seen in these things. In addition, Mecca does not shirk away from having Ellie face her issues of recklessness.

Spouse Gavin, in fact, confronts her in a rather potent dramatic scene and forces an ultimatum of her choosing between the safety and survival of the immediate family she has now and the answers surrounding her mom’s death she so desperately craves. Of course, another twist develops that allows a way for Ellie to both have the proverbial cake and eat it. This is intended to be a horror creepshow after all, not a Lifetime Channel domestic drama of the week.

Of course, being a low budget indie, Dwelling is not without its flaws. Mecca seems to be conflicted in how he wants the set design to look. For instance, he shows us rooms where the furniture is cobwebbed in an attempt to depict age and lack of use, but the walls are obviously freshly painted white and the scene is brightly lit. Not a good way to convey a dark, somber, oppressive mood. Perhaps there’s a scene on the cutting room floor showing painters remodeling and the new owners arrive early? Or, maybe the house gave itself a spruce up to look good for potential victims?

It’s also a mite groan-inducing that Mecca borrows themes from other hair-raiser cinema such as the Annabelle films (dolls play a prominent role here) and even harkening back to haunted mirror entries like Ulli Lommel’s The Boogey Man from 1980 and others. I was hoping for something more of a fresh take on the subgenre in this regard. A positive within this negative, though, is that at least Mecca presents the well-worn formula with a respect and polish. There’s no crude humor or showy special effects bits mucking up the narrative. It’s simple and straight-forward, if a bit unoriginal. Not the worst thing a director can do with a movie.

Even with the problem of the juxtaposing elements of the interior set design, kudos should still be given to Mecca and BeWILdered Media for finding yet another suitable locale to stand in for its supernatural force embedded titular edifice. Once again, every room has something of a differing aura about it. Some have a welcoming, warm air while others suggest strongly to stay away from. And Mecca even manages to include a boarded up secret room just to jangle the nerves a bit.

Refreshingly, Dwelling fades out at a running time of 87 minutes, which goes a long way to proving that Mecca knows how to edit thrillers. In fact, looking at the picture as a whole and seeing just how lightly the helmer treats the introductory exposition of characters and the home’s history (a newspaper clipping reading and a few well-placed flashback bits of the mom’s drowning death pretty much tell all), gave me the impression that Mecca was more devoted to tight pacing that gets to the scares and providing a good thrill ride than he was in detailed backstory filled with answers as to who and why. 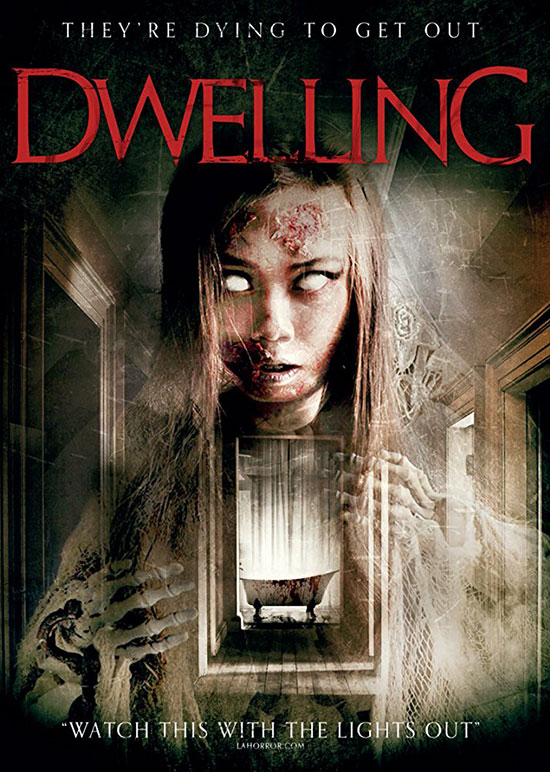 For a cast of unknowns, I was surprisingly impressed with the four leads and especially Erin Marie Hogan as Ellie. She plays driven and obsessed very well, yet layers it with fear of what her pursuit is doing to her family and the love for them as well as for her sister. Devanny Pinn is given fewer scenes to work with as the institutionalized sister River, but still manages to evoke sympathy for her plight. Mu-Shaka Benson is cool and collected as the husband Gavin, whose protective instincts for his niece rear up mid-way and force him to confront Ellie in a nicely done dramatic moment. And Abigail Mary, as the niece Izzy who’s kind of a focal point of the unseen presence, has the remarkable ability for a young actor to change tonal qualities with ease at just the right moments. One minute, there’s sweetness. The next, just a bit of the ominous as to unsettle the viewer. 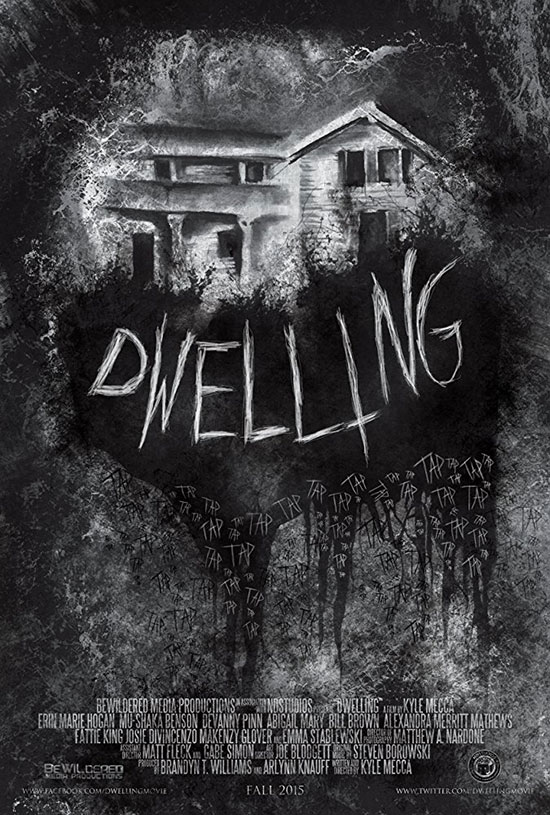 In a way, Dwelling (2016) the movie is not unlike the evil house central to the story. Sturdy, well-built, with off-kilter architecture that, in spite of a few flaws, beckons you in despite your feeling of foreboding that dark things are about to happen. They are and it will make for a good nighttime scare!