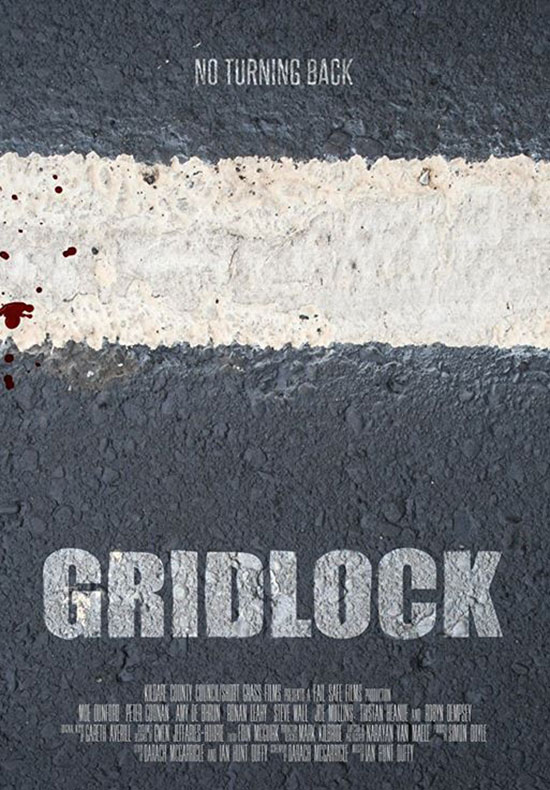 When a little girl goes missing from one of the cars, her father forms a desperate search party to find her, and soon everyone is a suspect.

Set on a back country road in Ireland, our story opens with a father (Moe Dunford) on his cellphone trying to find a sitter for his daughter Emma (Robyn Dempsey). It’s not going well, and things get worse when he comes across an unfortunate accident and this being a single lane road, the cars are lined up forever with no way to get through.

He tells Emma to wait in the car and walks up to see what’s going on. Seems a driver has collided with a horse drawn carriage. So obviously they will be sitting there a while until the road can be cleared.

He goes back to the car to tell his daughter what’s happened only to find she is gone. His concern quickly turns to panic, and soon he is in confrontation with the other drivers as he tries to find out where Emma may be.

A rather helpful fellow behind him suggests that Emma has been snatched, and mob rules take over. Each driver is in turn accused and asked to open their car trunks to prove their innocence.

And so the search for Emma begins. But where is she, and will she even be alive?

This is a real-world scenario type of horror film. Not a lot of gore, no obvious monsters. This is something that could realistically happen to anyone, and I believe it actually has happened in the real world, probably more than once. That very idea of it being possible makes the film suspensful, and feeds the fear for the viewer.

Some very convincing acting by the cast of characters thrown into this nightmare. I can’t call out anyone in particular, because as an esemble the cast are so much like “real people”. Even the ending, with its lovely twist, leads to an overall believeable film.

I don’t think I can say much more about giving spoilers, but I will tell you that this is a darn good short film.

Using my special short scale of one to five, five being awesome, I’m giving this film 4 car trunks.