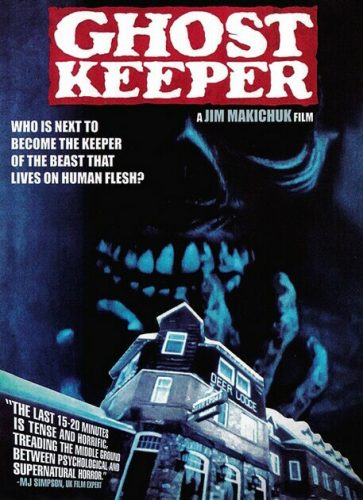 Three friends on snow mobiles come across what appears to be a closed-down ski resort, only to wish that they had kept going once the harridan of an owner reluctantly takes them in with her two sons and a mystery in the basement.

Ghostkeeper (1981), a highly atmospheric horror film from Canada, begins with a title card that reads “In the Indian legends of North America, there exists a creature called Windigo…a ghost who lives on human flesh.” Director Larry Fessenden made a very under-rated film about this subject in 2001 called Wendigo. Ghostkeeper attempts to bring this subject to the screen, but apparently due to money issues this plot point never quite gets off the ground.

Jenny (Riva Spier), Marty (Murray Ord), and Chrissy (Sheri McFadden) are friends who end up at a closed-up hotel while snow-mobiling. They enter the premises and make themselves at home. It becomes apparent that the owner is there and she’s an elderly woman (Georgie Collins) who tells them they must leave. When the three friends partially convince her that they cannot leave in the storm, she sets them up in their own rooms. The woman has two sons who live there, too, and one of them ends up killing Chrissy and dragging her to the basement to the Windigo creature.

Marty and Jenny start to behave differently and their actions appear to be influenced by something sinister in the hotel. Before long, strange things happen and the film’s ending raises more questions than answers. 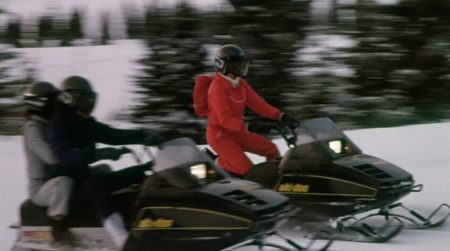 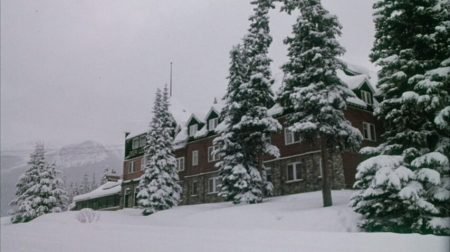 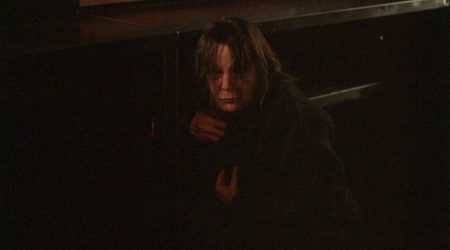 Ghostkeeper is a film that I didn’t hear of until I saw it on a shelf in the horror film section of Blockbuster Video years ago. Originally released on VHS by New World Video circa September 1990, the film is listed under American Cinema Marketing for its 1981 USA theatrical release; I can’t honestly say that I even recall that. If you have seen Ghostkeeper on VHS and weren’t a fan of it I would recommend giving it another chance as that transfer was very dark and nearly impossible to see. It has been released by Code Red on Blu-ray (a DVD was issued in 2012) and is a nice spooky Canadian tale for a cold winter night.

The film was shot in December of 1980 and while there are similarities to The Shining (1980) a lot of that appears to be coincidental. The Blu-ray is a special edition and it contains a running commentary with the director and the two lead stars who play Marty and Jenny; the commentary is moderated by Jeff McKay. This is the first time they have all been together since the film was shot, and they have a lot of fun reminiscing about their experiences making the movie in addition to commenting on the on-screen action. It’s a highly enjoyable experience, so be sure to give it a listen after watching the film. 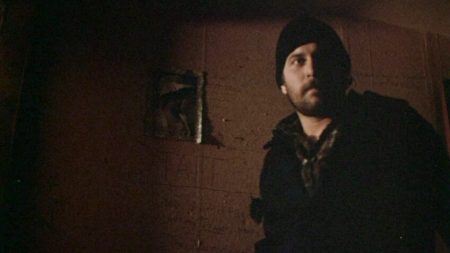 There are some nice extras included on the disc. In addition to some behind-the-scenes shots there is an extended interview with Georgie Collins, the woman who plays the elderly woman who runs the hotel. In her mid-80’s when the interview was conducted, she is very sharp and highly engaging.

The transfer is derived from the only remaining known 35mm print of the film with a new high definition scan of the source print (I hate when movies I enjoy are neglected while others I hate are given the five-star treatment). The print is in fairly decent shape, and the imagery is a lot clearer than the VHS transfer and the DVD from 2012. 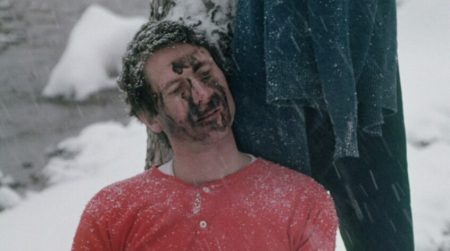 The film was shot at the Deer Lodge at Lake Louise in Banff, Alberta, Canada. The director mentions that he would like to begin shooting a sequel to the film “next month”, believe it or not!  He has an intriguing premise for that film starring the people who are in this film. To my knowledge, this has yet to happen. 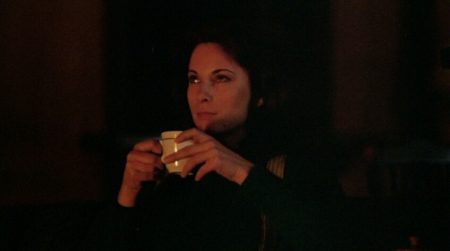 Ghostkeeper is not the usual type of thriller associated with Halloween, and there are those who have probably seen it and contend that it’s a boring film. But, give it a chance, as it is different and provides the perfect sense of creepiness for Halloween. The film has a terrific score by Paul Zaza who also scored Curtains (1983). These are two scores that should be released on CD.  He is best known for Prom Night (1980) and My Bloody Valentine (1981). Some of the music in Prom Night has appeared again both here and in Curtains.

Interestingly, there is a completely different opening to the film on the Spanish videotape that can be seen here on Youtube (the notes include an explanation), and no mention of this is made on the running commentary. This clip, posted by Chris Warren, runs 1:34. While it was not included on the 2012 DVD, it is included on the new Blu-ray, but in a shorter 1:18 version, so the Youtube link is more complete. According to Chris Warren’s notes on the Youtube channel: “Two years after the film was shot the distributors shot an extra scene to promote overseas sales. Jim (the director) did not approve the scene (didn’t like it at all), but it still got distributed anyway which he most likely was not happy about.” This is most unfortunate as Paul Zaza has some additional exciting music here, too. The music that he has written for all of these films should all be released on a soundtrack album.