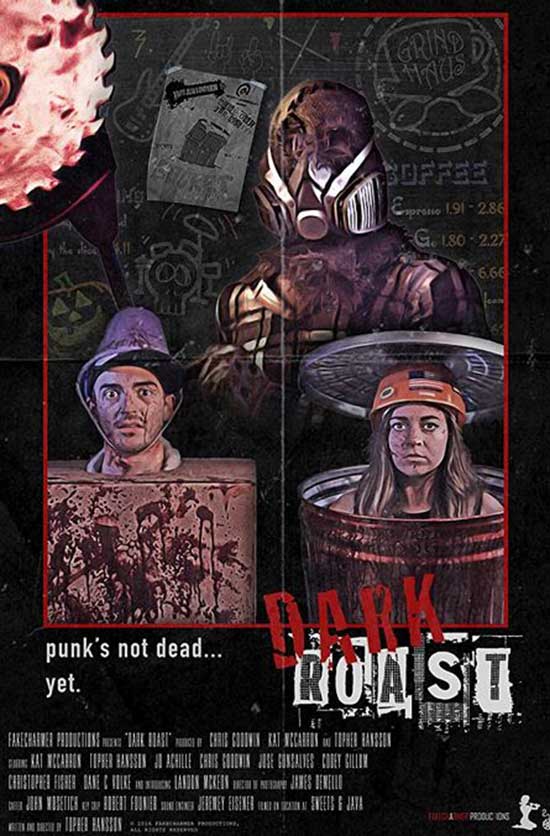 Two slacker members of a band called Piss Bucket find themselves stuck at the coffee shop where they work on Halloween night. It sucks for them because they have a big concert to get to so they are eager to punch out and get rocking. Unfortunately for them things go from bad to worse when they start getting threatening phone calls and before they know it their customers start dying. Will they make it to their big show in one piece?

As most of you know, I am not a big fan of horror comedies. I can count on one hand the ones that I actually like while there are a ton of them that I don’t care for. Clocking in at just under twenty minutes Dark Roast falls somewhere in between. I didn’t love it and I didn’t find it to be particularly funny but at the same time I didn’t hate it and thought that some things worked for it. While it wasn’t the best short film I’ve ever seen it also wasn’t the worst and I just can’t help but feel like it was missing something that would have made it very good. As it is I think that it is a good way to kill twenty minutes if you don’t have anything better to do but you probably won’t remember very much about it in a week’s time or so.

Let’s talk about what worked first. I really thought that the acting was top-notch and that both Topher Hansson (who also wrote and directed) and Kati McCarron delivered as the main characters Nathan and Vanessa. They both do an extraordinary job of bringing their respective characters to life and making them both not only likable, but also relatable as well. McCarron especially does an awesome job as she owns every scene that she is in and is just cute as a button in general. I also really loved Berenice Achille as Penelope as well and thought that she ruled. 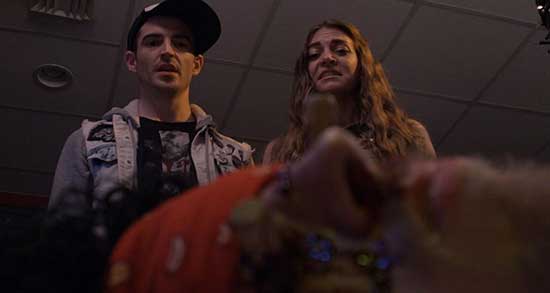 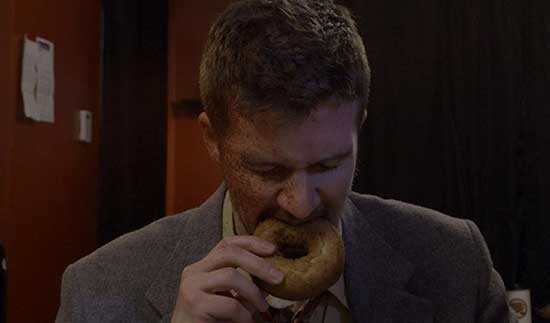 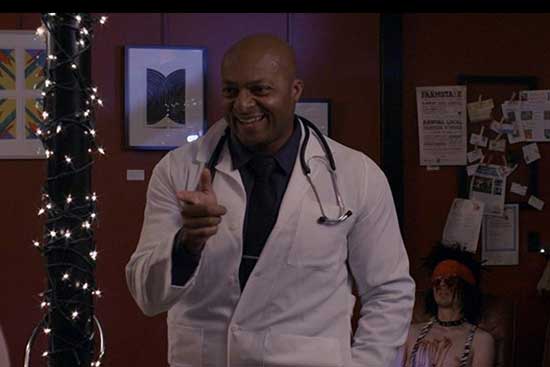 The same could be said for Jose Guns Alves too, and even though he has a small part he does an awesome job (was it just me or did he remind anyone else of Keegan- Michael Key in terms of looks, voice, and mannerisms?). One of the strongest things about Dark Roast was the acting and I can say that everyone involved in this film has serious talent and has nothing to be ashamed about when it comes to acting ability.

I also thought that the effects looked pretty damn good too considering the fact that the filmmakers were most likely working with a limited budget. We get some pretty cool stuff such as some eyes gouged out with drum sticks, a throat slashed by a ceiling fan, and dismemberment via weed whacker and all the death scenes were excellent and looked quite impressive. I’m not sure who handled the special effects on the movie but they did a great job and should be proud of their work.

On the other hand, there were certain things that just didn’t do it for me. I thought that the script was very lacking overall. While the dialogue was okay and everything for the most part something just seemed off about the entire premise and it didn’t quite work for me.

To be painfully honest I just don’t think that the premise was that interesting and if I had to guess I would say that Hansson probably had a great deal of trouble writing the screenplay because I have a feeling he just wasn’t that into it. I think that it was one of those cases where you have a great idea for a movie but when you sit down and start writing it you realize that it really isn’t such a great idea but you are committed to finishing it so the writing process is a little like pulling teeth (been there and done that more times than I can count). It just felt to me like he just wanted to be done with the script after he started writing it and just wasn’t really feeling it himself but powered through to the end. On paper it sounds like the premise may have potential but somewhere along the line something didn’t go quite right with the execution and what at one time could have been quite awesome and fun turned out being something else entirely.

I also didn’t think that the film was that funny. There were a couple of times where I may have chuckled a bit but in general I thought that Dark Roast was lacking in the humor department (which isn’t good when it is supposed to be funny). I also hated that the filmmakers resorted to potty humor at one point and we are treated to a scene where someone is in the bathroom farting over and over again. I’ll admit that I have a weird sense of humor and only certain things make me laugh but this movie wasn’t one of them. Maybe it’s just me though and some of you out there may be rolling in the floor with laughter when you watch it (but I have my serious doubts).

Dark Roast was a fun little time waster but that was about it. Originally it was supposed to be a full-length movie but I think that it works better as a short as there is no way it could have been milked out for 90 minutes (and I think that the screenwriter was aware of this which is why it was shortened). It isn’t awful, it isn’t wonderful, it’s just somewhere in between and I think that most viewers will feel the same way. If you’re bored and have twenty minutes to kill check it out sometime but don’t expect a life-altering change or anything.