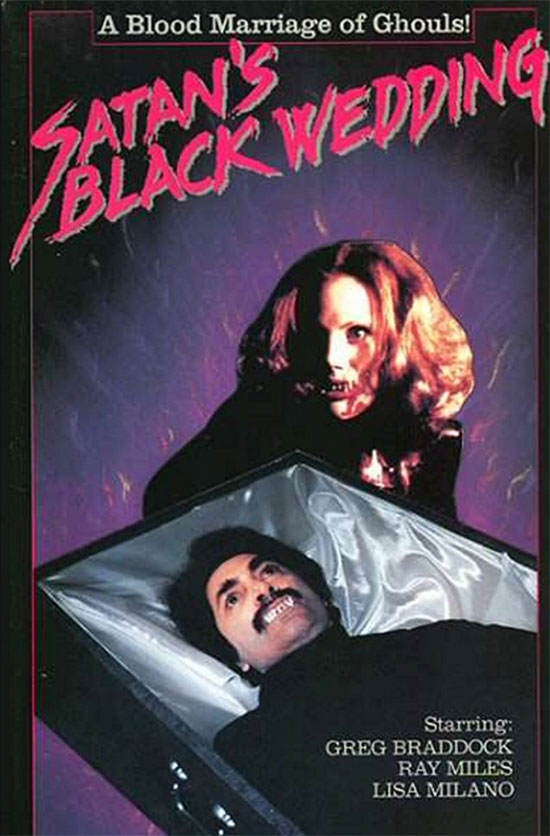 A Hollywood actor returns to his hometown to investigate his sister’s suicide. But he discovers she may actually have been murdered and all the clues point to a cursed church and it’s mysterious priest.

I recently worked a particularly spooky night shift with the locations department of a television series. Due to a broken door lock I was required to babysit a small church nestled in the middle of an old cemetery until the locksmith arrived in the morning. So I sat outside the church overnight, alone, under the light of a full moon. A hooting owl was the only missing horror cliché, although three raccoons and an overly curious skunk dropped by to say hello.

The stroke of midnight seemed like the perfect time to fire up my laptop and watch my latest review assignment— the forgotten vampire movie SATAN’S BLACK WEDDING. No fangs and casket opus ever had a more ideal venue for viewing. It was a publicity man’s dream. You can almost hear some small town radio DJ proclaiming, “Be our sixth caller and win a chance to watch Satan’s Black Wedding, alone in a haunted graveyard at midnight! Will you survive?” 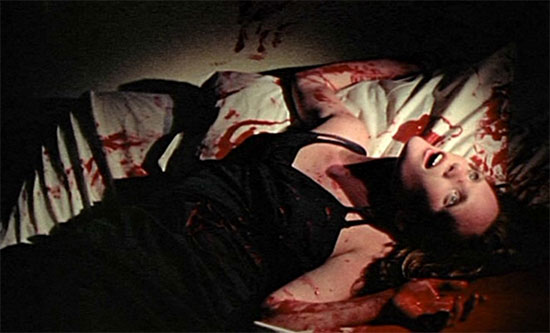 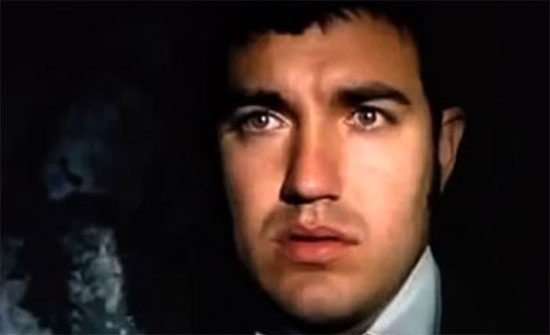 The verdict? Well, sadly, even under those ideal conditions Satan’s Black Wedding couldn’t catch the bridal bouquet. It does open nicely with a young woman repeatedly slashing her wrists under the cold glare of a creepy vampire. Note: this scene is missing from some video releases. But after this promising opener the director starts digging his own grave.

Satan’s Black Wedding is the tale of Mark, a young actor who returns to his childhood home in Monterey to investigate his sister’s suicide. But the detective investigating her death suspects it was not a suicide at all— probably because every single piece of evidence points to it being a murder. The detective’s habits of letting people manhandle said evidence and clomp through the crime scene like a basketball court probably hampers his investigation.

Mark discovers that his sister was writing a novel inspired by the legends surrounding a nearby church. The chapel is presided over by a priest, who looks like every altar boy’s reoccurring nightmare, AND also happens to be the vampire from the opening scene— so much for any mystery. The creepy cleric informs Mark that no less than Satan himself appeared in this church a century ago. After this revelation Mark reunites with his lost love and the two team up to solve the mystery.

Ten minutes into this movie I had a gnawing suspicion that Satan’s Black Wedding was a softcore sex movie shorn of all its nudity and faux fornication. This made me a bit nervous because with a cast this unattractive nudity is more of an implied threat than a turn on. My post viewing research proved my initial suspicions were incorrect BUT Satan’s director Nick Millard had indeed made dozens of soft and hardcore sex films in the sixties and seventies. This explained why Satan’s Black Wedding had all the trappings and technical flaws peculiar to the sexploitation genre. 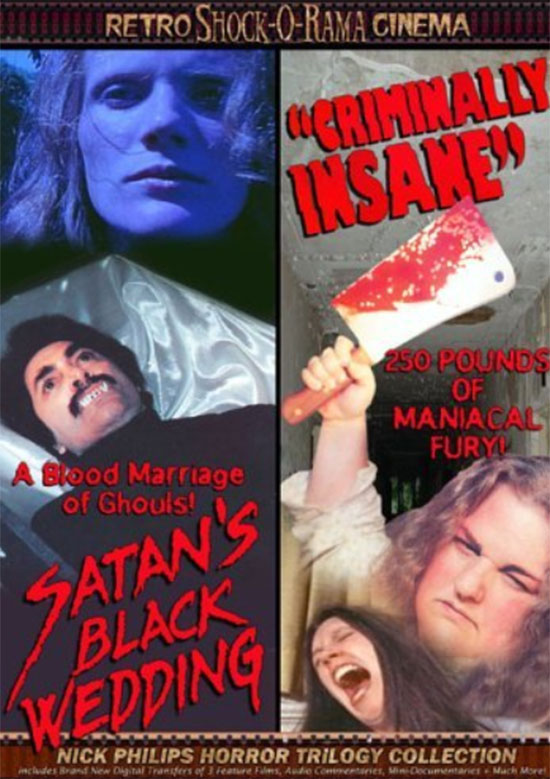 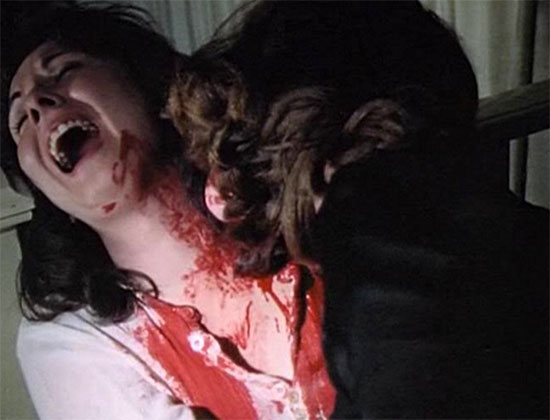 There’s another holdover from Millard’s crotch opera days— endless scenes of people driving from place to place. It was a technic used by sexploitation filmmakers to pad the running time while hiding the fact that their next location was just another room in the same house as the last scene. The characters in Satan’s Black Wedding drive around a lot, especially for a film that’s only sixty-five minutes long. 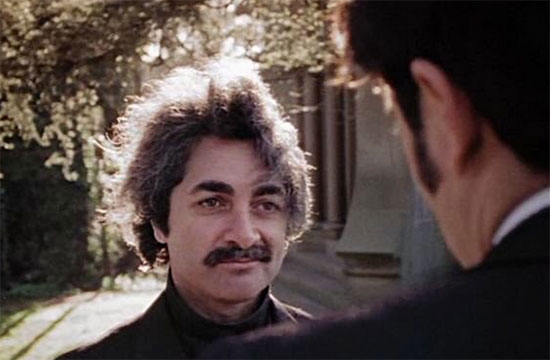 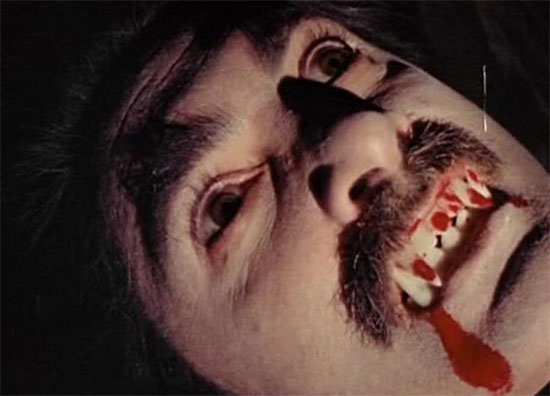 The film’s languid pace doesn’t help at all. The hero talks slowly, but he’s like a chattering meth head compared to the villain’s glacial speech and movement. I thought the video file had frozen a few times, but it was just another monstrously pregnant pause.

But all these sub par factors actually provide some excellent “so bad it’s good” entertainment value. These are some of my favorite moments: 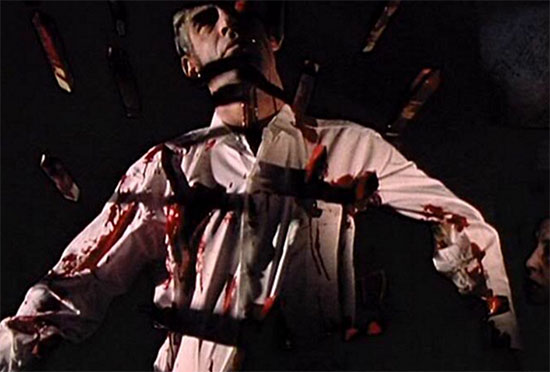 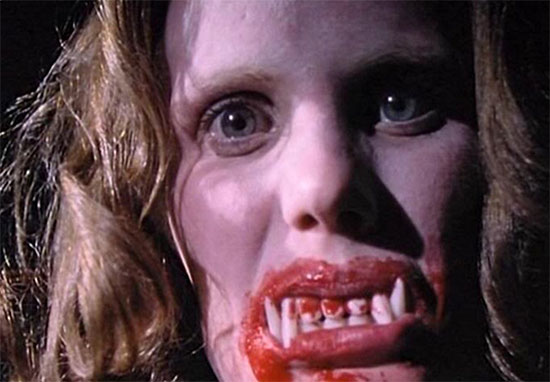 So in retrospect I guess I enjoyed Nick Millard’s undead epic, even if it was for all the wrong reasons. It’s one of the few vampire films that shouldn’t be watched in a full moon lit cemetery at the stroke of midnight. It should be enjoyed while lounging on a sofa with plenty of alcoholic libations and a pizza. In those surroundings you’ll probably love it.