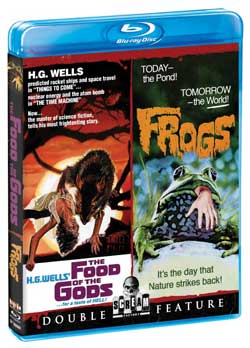 Morgan and his friends are on a hunting trip on a remote Canadian island when they are attacked by a swarm of giant wasps. Looking for help, Morgan stumbles across a barn inhabited by an enormous killer chicken. After doing some exploring, they discover the entire island is crawling with animals that have somehow grown to giant size. The most dangerous of all of these, however, are the rats, who are mobilizing to do battle with the human intruders.

There are those who love sleazy cinema and there are those who just possess a passing interest in the trends and films that are sometimes associated within the sub genre. For the true trash and sleaze aficionados there are the untouchable greats , the films and directors who rise above and will always be held in high regard, the classics if you will. Seated among the select few is none other than Mr. Burt I Gordon , a man who should need no introduction to those of you familiar with the schlock and awe sci fi films of the early 50’s. Mr. Gordon has created some of the absolute most memorable and imitated films within the genre,creating such staple classics as ; Beginning Of The End ( featuring a very sexy heroic Peter Graves, yummy ), Attack Of The Puppet People ( featuring a pre Miracle on 34th street Susan Gordon looking fantastic) , and of course Mr. Gordon’s swan song the brutal and outlandish camp classic Food Of The Gods. 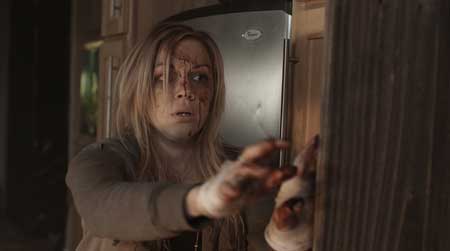 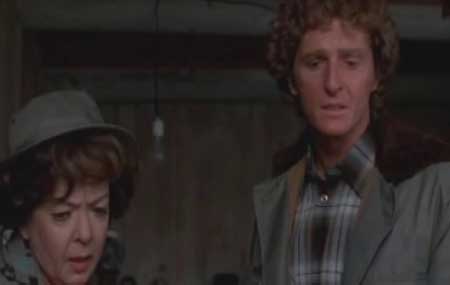 ” My Name’s Morgan and I Play Football “…….. and so begins one of the great trash classics of the 70’s. In reality Food Of The Gods is very loosely based on a series of three books by H.G. Wells which were released in varying different degrees in the early 40’s. Burt I. Gordon adapted Mr. Wells novel in 1976 for AIP ( American International Pictures ) and boiled the lavish tale down to its most basic elements. The film reduces Wells tale to a ” Nature Strikes Back Saga “.The Food mysteriously bubbles up on a remote farm on an island somewhere in British Colombia. Mr. and Mrs. Skinner see this as a gift directly from God and feed the mysterious food to their chickens which begin to grow larger than humans as a result. Rats and wasps also consume the food and begin to grow to enormous size and infest the island with giant vermin ( like New York ).

Mr. Skinner is eventually attacked and killed by the giant rodents returning home one evening from the city when his car breaks down. A professional football player ( our lovely hero Morgan who is also our guide on this harrowing journey ) is on the island on a hunting trip with his buddies , a way to relax before the big game , when one of them is stung to death by giant wasps. After taking his friends back to the mainland , Morgan does the only sensible thing there is to do , he returns to investigate ( duh). Also thrown into this sordid tale of ecological madness are a Thomas and Rita ( not a lesbian couple btw ) an expecting couple ; Jack Bensington the sleazy owner of a food company who hopes to market and sell the ” food ” ; and Bensington’s assistant a tough and sassy cookie and ” bacteriologist ” . After everyone has had his/her run in with the less than friendly local wildlife Morgan is able to locate and exterminate the giant Wasp nest with a stick of dynamite. Morgan and the other survivors are eventually trapped in the Skinner farmhouse surrounded by giant rats. 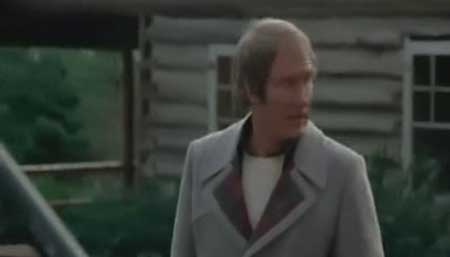 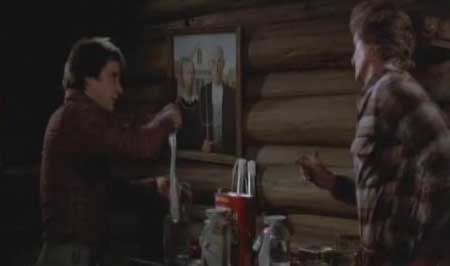 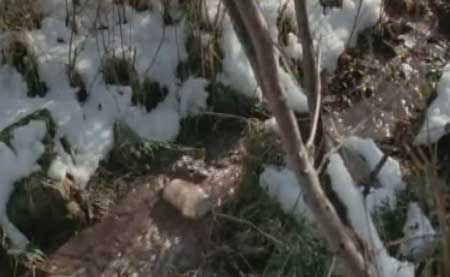 Mr. Gordon pretty much follows the nature gone amok scenario that was prevalent in the late seventies and early eighties, and why not , the man helped create the very genre in the fifties. What makes Food Of The Gods so much damn fun is the way in which Mr. Gordon shamelessly adheres so close to the structure of those films without missing a beat. Sometimes something can be so familiar that its comforting , like a nice hot plate of grandma’s mac and cheese , Food Of The Gods is cinematic comfort food at its finest.

What separates Food Of The Gods truly apart from the heard is the way in which the visuals are accomplished . The special effects team , including an un credited Rick Baker , go all out in creating legit models of giant mouse heads and giant wasps as well as using classic split screen effects. The combination of realistic make up effects and trick screen effects may seem dated in 2015 but still can create quite a strong sense of visual wonder . For those of you out in movie land who may be animal lovers Mr. Gordon does shoot , drown , and mutilate several rats during the duration of this film , all in the name of good trash, of course !!!! 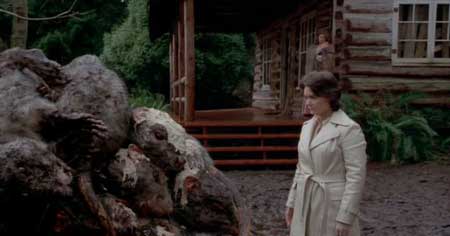 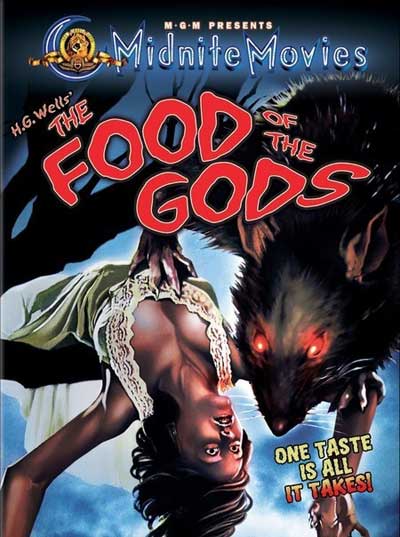 The cast is a veritable who’s who of B- movie actors/actresses who are more than capable of spouting out the kind of ridiculous ham boned nonsense that Mr. Gordon has presented to them as dialog. We have Marjoe Gortner ( who fought Bobbie Bresee’s killer tits in Masoleum), as our football loving hero Mogan ; Pamela Frankiln ( who Orson Wells pined over in Burt I Gordon’s Classic The Witching ) ; and of course Ralph Meeker ( from the classic pre Predator alien hunter opus Without Warning 1980 ) as the sleazy salesman. The cast isn’t going to win any major awards but its a good solid cast of veteran genre talents having a blast with Burt I. Gordon’s wonderfully inane dialog. 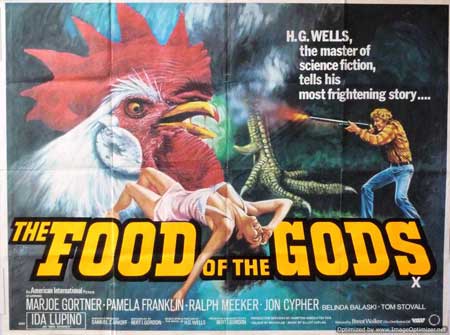 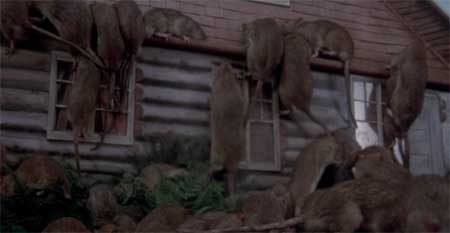 In the end Food Of The Gods paved the way for many imitators to follow ( Mega Shark Vs. Monster Of The Month, Sharknado ) all owe Mr. Gordon more than a tinge of gratitude. Hell, even the man himself used the almost identical story line a few short years later with the his glorious Joan Collin’s vehicle Empire Of The Ants. Food Of The Gods is pure cinematic gold for us sleaze fanatics and trash enthusiasts all others need not apply, and really if your going to bitch and complain about the quality of a film like this , why did you bother in the first place ? This is the kind of film that has been tailor made for us fans of cinematic sleaze , so reveal in it my friends.

THE FOOD OF THE GODS