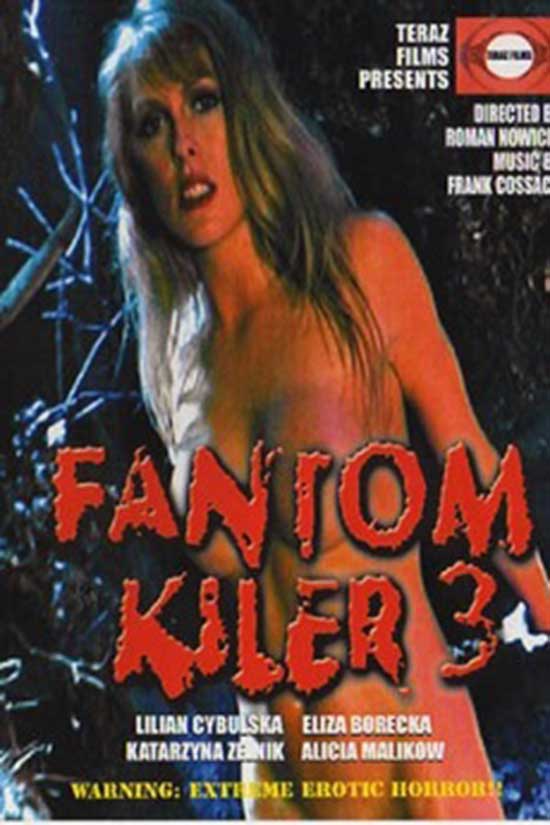 A beautiful woman drives to the country, strips and photographs herself in various compromising positions. Naturally, Such lewed behaviour cannot go unpunished by the Fantom Kiler. Later on Ursula arrives at a run down garage where she hopes to get her car serviced. Unfortunately its not only her car that gets serviced as Natasha is forced to strip and be humiliated. But there’s only so much a woman can take as she turns the tables on the licentious mechanics. But for Ursula a more terrible fate awaits her out in the woods.

Time to take a trip in the way-back machine, all the way back to 1998. Bill Clinton debated the definition of the word “is,” Mark McGwire and Sammy Sosa hit so many home runs you’d swear they were chemically enhanced, Hollywood puked out movies like Titanic, Armageddon, and Godzilla, and Polish filmmaker Roman Nowicki (aka English filmmaker Trevor Barley) not only introduced us to one of the sleaziest, slimiest antagonists in horror film history, the Fantom Kiler, but kicked off a career in which the same basic plot would be repeated eight more times under various titles. While “Nowicki” opted for the horror plus hardcore sex route with his Mark of the Whip and Fantom Seducer series, in the Fantom Kiler films, he keeps things simple: he sticks to the hard edge of softcore, keeping things X-rated instead of XXX, and uses essentially the exact same storyline while bringing back the same actresses in most of the films, despite killing them off each time, in a very Dyanne Thorne/Ilsa kind of way.

In part three of the Fantom Kiler series, we open with a woman taking nude photos of herself in the woods – the same woods as seen in the previous movies. At her client’s request, she handcuffs herself while she poses (she sells nude photos of herself, incorporating client requests in her shoots). Wouldn’t you know it, she oils her naked body up, we hear some familiar music, and then the masked killer strikes, stabbing the poor woman to death, then posing for some photos with her corpse draped over the hood of her car like she was an animal he hunted and killed. Of course the detectives are incompetent, as usual, focusing more on her curves than on potential suspects.

Moving forward, we have a woman push her car into a garage, begging two mechanics to fix it for her. Instead, they steal her wallet, insult her while she loudly uses the bathroom, then threaten to call the police if she won’t pay. Eventually they say that she can strip for them as payment, but don’t hold true to their word. They attack her, forcing her to defend herself with a chainsaw before burning them alive. And, of course, she leaves without her clothes on, which lends itself quite comfortably to the next scene, when she is stopped by the masked killer and has to run into the forest to escape, only to circle back to her car and have him appear in her back seat. Another woman, a nude dancer, is attacked and killed in her dressing room (after performing her routine, don’t worry). In what could be a twist ending, we find out who has been doing all the killing, only to then have everything flip on us and point in a completely different direction, finally closing on an Andreas Bethmann-style cliffhanger that reminds us yes, there is indeed a Fantom Kiler 4.

Here’s the deal: it would be very easy to rip into the Fantom Kiler series on a number of levels. The acting is bad, the dialogue is pretty ridiculous, the plots and the actresses (specifically, Eliza Borecka, Magda Szymborska, and Katarzyna Zelnik, all three having filmographies entirely comprised of Nowicki films) are used over and over again with little differentiation between films to help us remember which is which, as is the exact same side of the road/woods set, and that’s just for starters. But at the same time, this movie never claimed to be something it’s not; it is an unapologetic sexploitation film in the guise of a slasher, with attractive women covered more in oil than blood, and every once in a while, a killer appears to the synth-y soundtrack of Frank Cossak (which I can neither confirm nor deny is his real name).

I do not believe in calling things I like that fall outside my normal interests “guilty pleasures,” they are just other things I like. But, since the term is a familiar one to most people, I’ll say that the Fantom Kiler series would be equivalent to what would be my own guilty pleasure. These are sleazy films, with scenarios that many people would suggest are offensive and/or insulting to the viewer’s intelligence, and they are certainly not well done by any means. But at the same time, they’re ridiculous, stupid fun. I’m fairly certain that any of the four films can be watched without having seen the others, but the general consensus is that if you’re really serious about checking these out, you should probably start with part one and work your way forward. Fans of part one and two will certainly enjoy Fantom Kiler 3, as will anyone who likes movies that aren’t shy about throwing together a flimsy storyline as a vehicle for lots and lots of nudity.