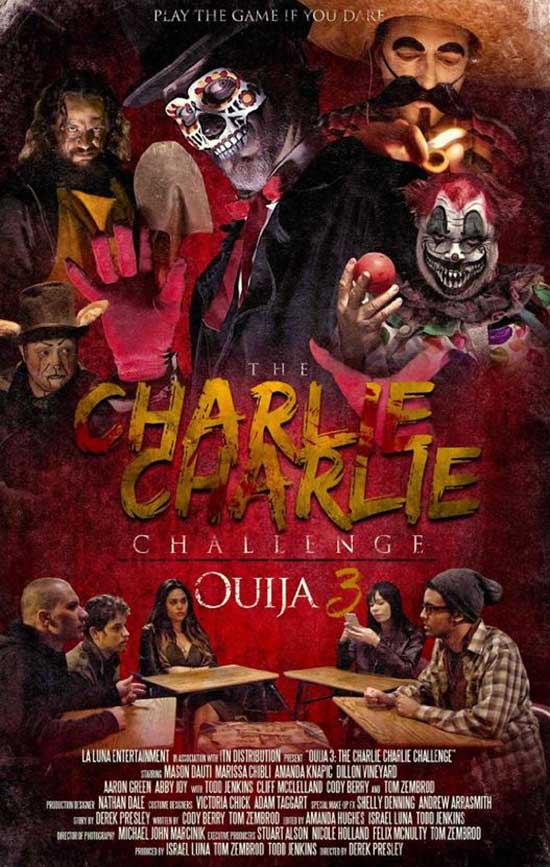 An Eccentric haunted house owner invites a group of hapless teens to play the terrifying game known as Charlie Charlie, overnight in the many attractions his house has to offer. While the game is meant to be a mere spectacle of spooky fun, it soon turns into a true nightmare leaving the teenagers, and the owner, battling for their live

Filmmakers are always trying to find trends and fads when making their movies so that their stories are propelled into the cultural mindset. They may have been inspired by something that happened or might be setting out to make a story about something popular. Whatever the case, there are movies coming out all the time based on whatever is hot in culture.

Charlie Charlie was a 2016 low budget horror movie based around the idea of a game that became popular in English speaking countries in 2015. The game existed for many years in Spanish speaking countries, but when it came into the English language, it hit hard. The game is like a cross between spin the bottle and Ouija. The movie followed a group of teens who visited a haunted house to try out the Charlie Charlie challenge that was being held there. Once they began playing, however, they found that there were evil forces surrounding the game that wouldn’t stop hunting them until they finished it.

The simplicity of Charlie Charlie made it work better than it could have. A small group of characters explored a haunted house attraction while being hunted by a sinister force. There was nothing more to it. It let the people making the movie focus on other aspects to improve them. The scenery was one of the most important parts of the movie. The audience and the characters both had no sense of where they were within the layout of the haunted house, but the different rooms all had unique and interesting looks. This was due to the movie being filmed in a real haunted house that seemed to take pride in itself.

Charlie Charlie was set at Hangman’s House of Horrors, a large scale haunted house that hired actors to “haunt” the people who visited. The place wasn’t doing so well under the supervision of Gene (Tom Zembrod), also known as The Ringmaster. Nobody wanted to visit haunted houses anymore, so there was no cash flow. He couldn’t pay the employees of his haunted house. When he saw a news report about possible deaths due to the newly popular game, Charlie Charlie, he thought it would be the perfect gimmick to bring success to his haunted house.

Tom Zembrod gave a solid performance as Gene. He was equal parts showman, fear filled victim, and angry boss. These characteristics came together to give the only memorable performance in the entire movie. The rest of the cast left nothing to remember, turning in stiff, bland performances. For a group of characters that were supposed to be sympathetic, there was nothing to really connect them with the audience. One guy was afraid because what they were experiencing was what happened in horror tales. One girl was always on her phone. The writers gave the characters traits that should have brought them slightly above the nothingness that they seemed to be, but the weak performances brought them back down.

The other major negative aspect of Charlie Charlie was the way it attempted to scare its audience. Each of the major scares were telegraphed. At no point was the demonic entity shown. It sometimes took on the form of other people who were already deceased, but at no point did it take on its own physical form. That meant that when it was murdering people, they were running from nothing. The way that it killed people was telegraphed in the moments before the kill in a way that lacked tension. The movie would show what was going to happen leading up to it happening, which removed the surprise that would catch the audience off guard. It was an ill-conceived way to provide scares.

Charlie Charlie (2016) movie directed by Derek Presley wasn’t all bad. It was a decent movie anchored by an entertaining performance and interesting location. Most of the acting could have used improvements and the scares were underwhelming, yet it was still watchable. There’s nothing that makes me want to recommend the movie to anyone seeking out something good, but it felt like I didn’t waste my time checking it out. There’s much worse out there, and though this one isn’t nearly at the top of the heap for best horror, it at least brought enough entertainment to keep it from being at the bottom. Take that however you want.