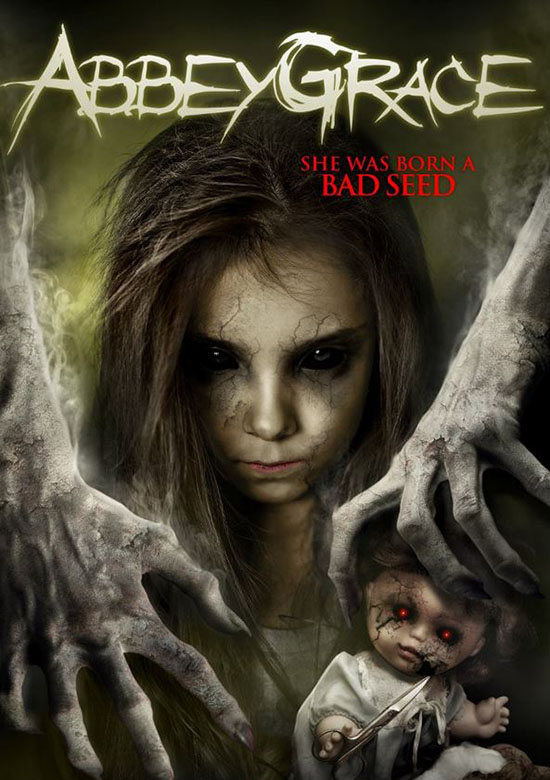 When Stacy’s mom dies, Stacey puts her life and career on hold and returns to her childhood home to take care of her OCD agorophobic brother Ben who hasn’t been out of the house for 23 years only to find out the house they grew up in harbors a disturbing secret.

Possession movies find their fear deep inside people. Nobody wants to lose control of their body. We want to make every decision. From an outsider’s view of things, nobody wants to see their friends or family change so drastically that they are no longer recognizable. That means that a possession movie comes at the audience from two directions. People fear being possessed and they fear watching other people be possessed.

Abbey Grace was a 2016 movie that joined the ranks of the many possession movies coming out on a regular basis. Where most possession movies have to do with demons, this one was about a vengeful spirit taking control of the occupants of a house that was formerly a school. Ben (Jacob Hobbs) was an agoraphobic man with OCD who hadn’t been out of his house in 23 years. When his mom died, his sister Stacey (Debbie Sheridan) returned to help him with his reclusive life. Things began to go downhill when Stacey’s dog Duke (Roach) became violent and attacked the siblings. Soon after, Stacey started acting weird and caused horror for Ben.

This was not a good movie, but I want to start with the good stuff. The way that Abbey Grace tried to tackle the agoraphobia and OCD aspects was admirable. Though the script was about the series of possessions, the story was as much about Ben overcoming the aspects of his life that had been holding him back. The horror pushed him into breaking the agoraphobia that his mother had instilled in him at a young age. The events pushed him to leave his house and enter the outside world. As for the OCD, a relationship that blossomed between Ben and Stacey’s friend Bridget (Amber Gallaway) helped ease the stress that he felt, leading Ben to not worry so much about what he got obsessive and compulsive about. This side of the story was an interesting addition that, though not entirely successful, was appreciated.

A common turn of phrase is “the road to Hell is paved with good intentions.” As you can see, the intentions of Abbey Grace were good. It used a standard horror tale to tackle the subjects of agoraphobia and OCD. But the movie still went to Hell. It fell apart quickly and easily with the bad building blocks surrounding the solid foundation. We must look to the writing to see why everything fell apart. The part of the movie most harmful to the strong underlying story was the characterization. Both of the primary characters were extremely unlikeable, even though the audience was supposed to sympathize with them. Ben treated Stacey like a slave because of his disabilities. Stacey tried to force major change upon her brother, acting like his OCD and agoraphobia were choices. Their personalities did nothing to make them likeable. The only reason there was any sympathy for the characters was because of outside characters. You cared for Ben because you wanted him to save Bridget. You cared about Stacey because of Duke. It had nothing to do with the two main characters, themselves.

None of this was helped by the bland and stilted acting. There wasn’t a single good performance in Abbey Grace. The worst of them was Amber Gallaway, who didn’t seem believable in anything did. She wasn’t a realistic psych doctor. She wasn’t convincing when she was scared. Even her love for Ben, the love that was supposed to be the driving force behind his change, felt false. Ben’s side of the relationship felt slightly more accurate, but Jacob Hobbs’s acting still wasn’t good. He was heavy handed in how he handled the OCD and agoraphobia. It didn’t seem like he actually had agoraphobia. It felt like he was forcefully telling the audience that he did. His OCD felt too manic. He seemed like he was hurrying to get through it rather than having it feel natural. Of course, I haven’t met anyone with these conditions so I can’t completely judge how true his performance was. In terms of watching it, however, it rang false. Then there was Debbie Sheridan who was clearly having fun in the later part of the movie. But through the majority of the runtime, she was dull.

If there’s one way to sum up Abbey Grace, it would be that it’s boring. It had the potential to be much more than it ended up being. There have been good possession movies, and tying that in with the conditions that Ben suffered from could have given a fresh take on the material. Instead, the movie was never exciting or entertaining. It went from boring to mildly watchable and back to boring. Even in the climactic scenes, the tension never hit. There’s something to Abbey Grace, that’s for sure. But everything came together in a way that lacked any impact. It left an interesting enough take on a stale concept without any punch. This was a dud.