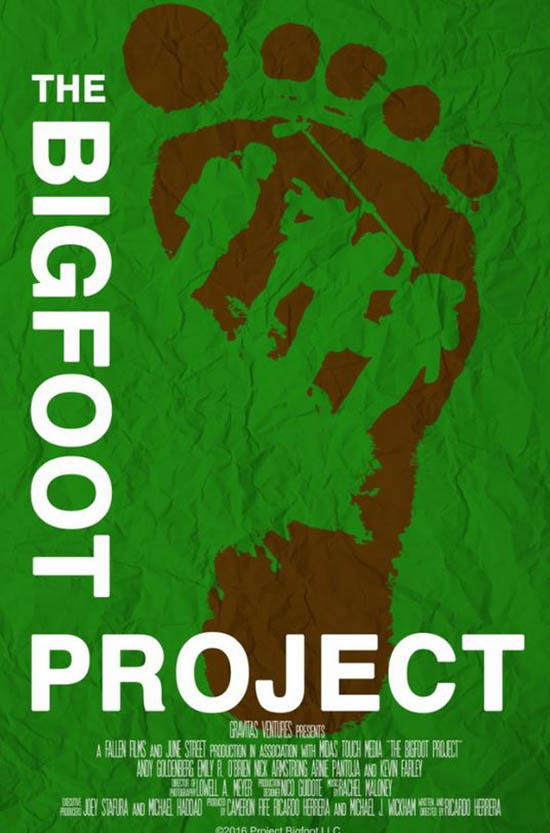 A bush-league group of amateur filmmakers spend two weeks in the backwoods of Georgia searching for the mysterious Bigfoot.

The Bigfoot Project is the first feature length film from Director Ricardo Herrera.  It is a horror/comedy  with a great cast that relies a lot more on comedy than horror.

I didn’t have high hopes going into this film, but after the first few minutes, I realized that I might just enjoy this film.  Captain Steve (Andy Goldenberg) assembles a group to do what starts out as a documentary about Bigfoot, but their plans change after a comedic turn of events.  The group includes Assistant Jamie (Emily O’Brien), Camera Man Moose (Nick Armstrong), and Audio guy Mickey (Arnie Pantoja).  As an introduction to their documentary, the group each introduces themselves on camera, and it’s hilarious.  Mickey is constantly eating gummy bears and introduces himself as if it were for a dating site. Moose talks about his silly short film, and Jamie, being the only female, clearly does not want to be there. After reports of a Bigfoot sighting in a small town in Georgia, the group heads there to interview witnesses who claim to have seen Bigfoot. 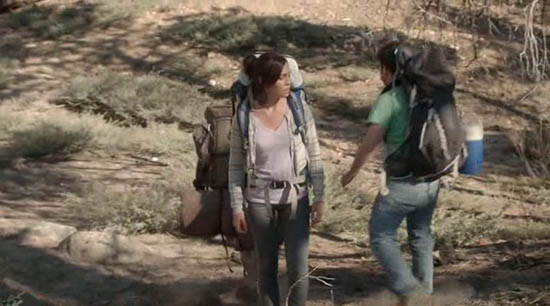 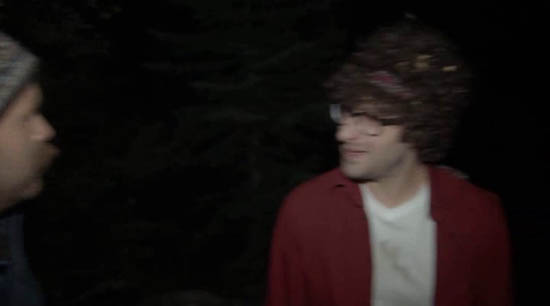 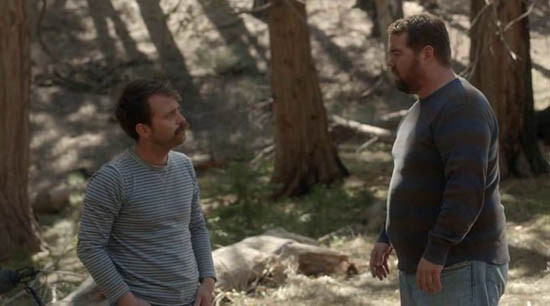 The witnesses, who all look like your typical poor, rural, Southern person, all pretty much turn out to be dead ends. Then they meet Willie Ray (Kevin P. Farley) and things get funny and creepy. Willie Ray claims to be best friends with Bigfoot and tells them stories about doing things like playing board games with Bigfoot, and he turns out to be one of the best things about this film.  Willie Ray is a really fun character, played with perfect comedic timing.  Naturally the group thinks Willie Ray is out of his mind and want to flee his house, but he wants them to stay for dinner and promises that Bigfoot is coming over to visit.  Dinner is squirrel stew and none of them are happy about that and Bigfoot never shows up, so they finally leave, even though Willie Ray wants them to stay. By this point, I was totally invested in the film and was having a good time. 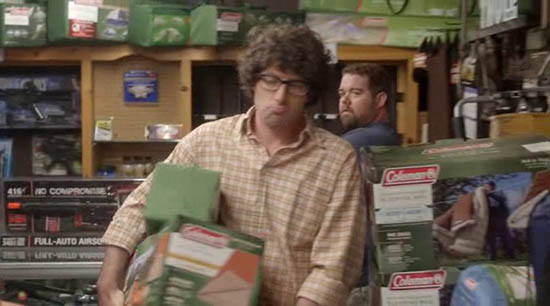 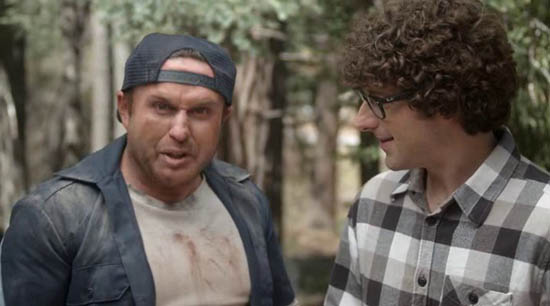 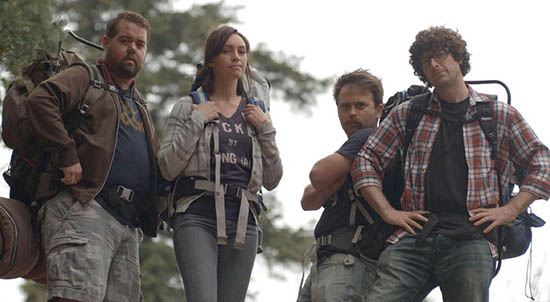 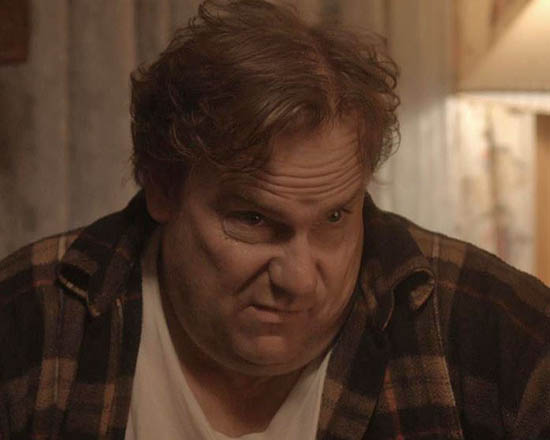 After their encounter with Willie Ray, Steve decides that the group needs to set out on their own to search for Bigfoot. He wants to turn their documentary into a film about the search for Bigfoot. He asks the group to go hiking with him to look for Bigfoot and promises each of them $1,000 if they do not find Bigfoot.  Everyone in the group reluctantly agrees, and after going shopping for camping supplies, they head out into the woods. None of them seem to know anything about camping, which makes for some amusing moments. Things like setting up the tent and making a fire prove to be difficult tasks, but Jamie takes control and gets their camp site set up. They thought they brought two tents, but only have one, meaning all four of them have to share the same tent. They’ve also somehow lost or left behind other supplies.  The acting is so good and each character is so funny in their own way, that the filmmakers managed to take what sounds like a silly plot and turn it into something quite entertaining. 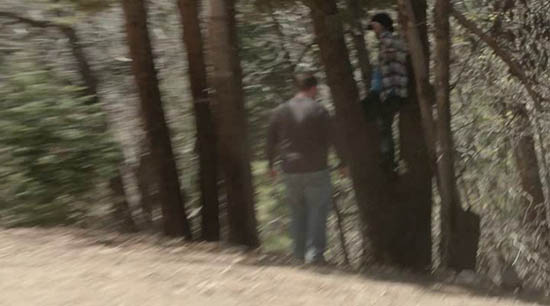 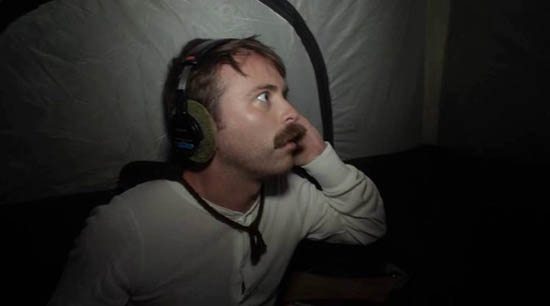 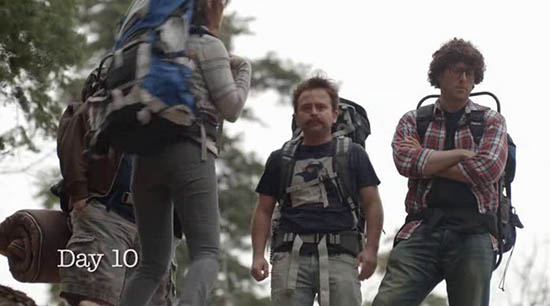 The group takes off hiking and even though Steve wants a camera rolling at all times, there are no signs of Bigfoot. It soon becomes obvious that Steve is taking this search a lot more seriously than the rest of the group, who are more concerned with interpersonal relationships than finding Bigfoot. Both Moose and Mickey spend a lot of time flirting with Jamie, and Moose and Mickey get into a pretty amusing fight after Moose eats all of Mickey’s gummy bears.

I’m not going to give away whether or not the group ever found Bigfoot, but I will say that their quest to find him was highly entertaining.  The editing was well done and the acting was great and this film was definitely funny. Even though this is a low budget film that probably won’t show up on most people’s radar, I would definitely recommend checking it out, especially if you’re looking for something fun to watch.