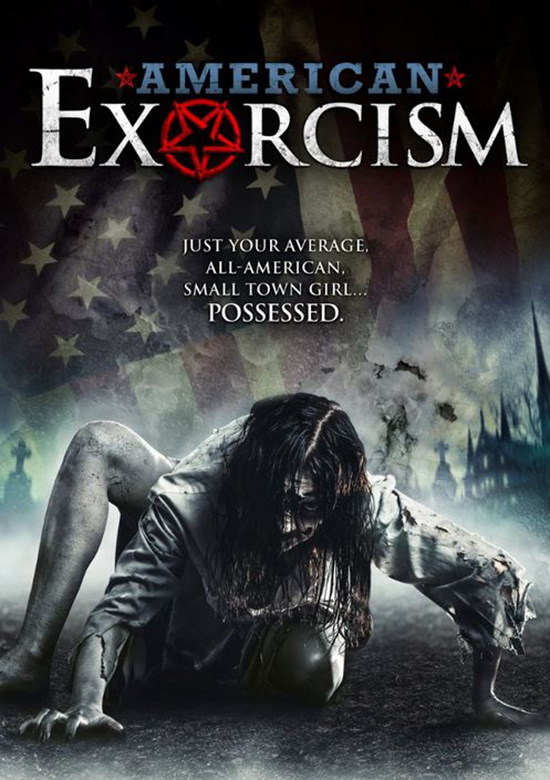 Damon Richter thought he left the world of possessions, exorcisms, and evil behind until an old friend arrives with frightening information about his estranged daughter knowing that only his otherworldly skills can save her.

American Exorcism was written and directed by Tripp Weathers, and is his first feature length horror film. 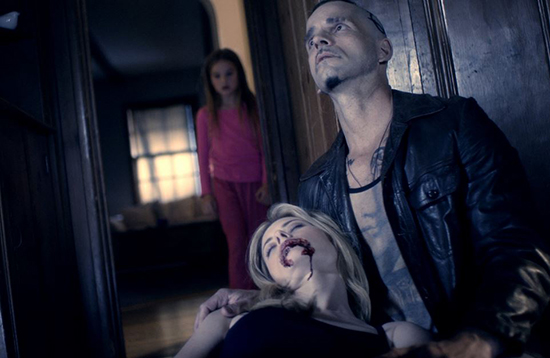 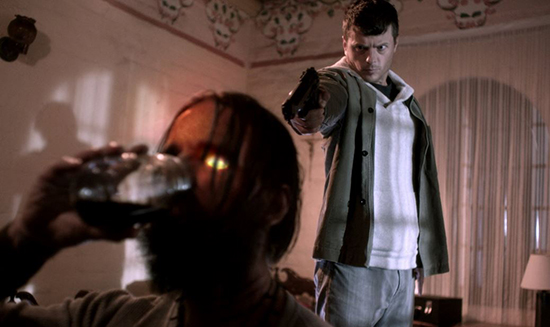 There are a lot of movies out there about demonic possession and I’ve probably seen most of them.  In my opinion, it’s difficult to find a film that approaches this subgenre in a new and original way.  Because of the use of the American flag in both the title sequence, and as clothing in this film, I expected the story to be at least somewhat patriotic.  It wasn’t.  So, I’m not sure what defines an American exorcism as opposed to a non-American one.  Damon Richter (Michael Filipowich) was the victim of a demonic possession that left him with the ability to remove demons from other people. He is covered in tattoos of sigils, that I assume are supposed to protect him.  He is married to Janelle (Jessica Morris) and they have a young daughter.  Damon has agreed to perform one last exorcism, which upsets Janelle because she wants him to quit immediately. 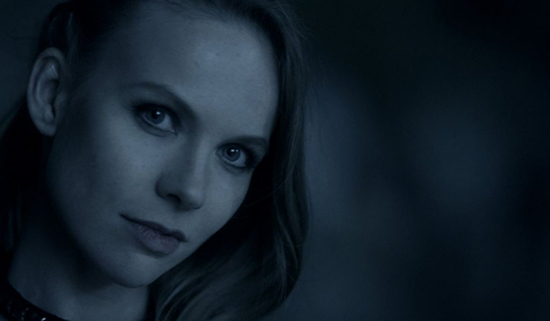 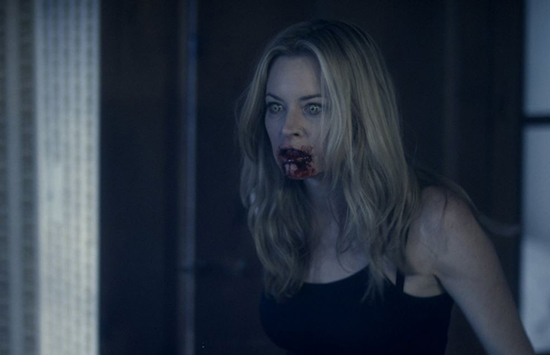 Unfortunately, the story in this movie is hard to follow and doesn’t make much sense.  It’s not really clear how Damon extracts demons from people, except that he makes strange noises and seems to talk backwards.  The possessed people exhibit the typical signs, such as contorting their bodies and making growling sounds, but in this film they also have fire coming out of their eyes and mouth.  In fact, the fire special effects are so poorly done, they are actually comical at times.  For some unexplained reason, there are also a lot of martial arts moves used in this film. There is no back story at all, so I have no idea why any of the characters behave the way they do. 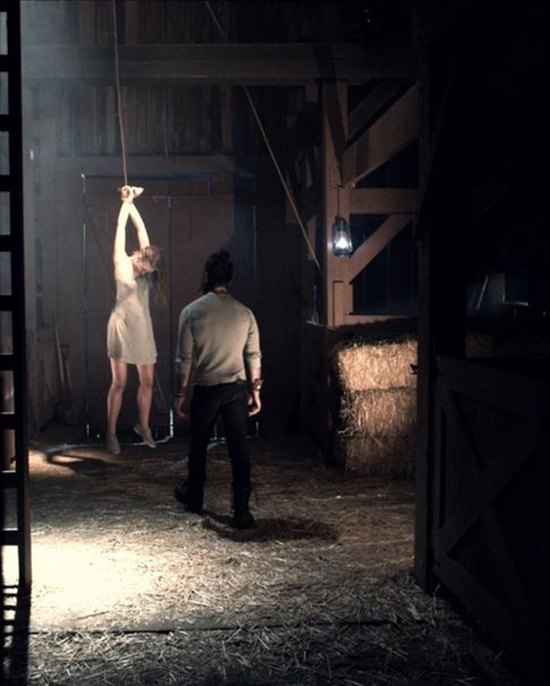 The movie never shows the demons in their true form, like some other films have, so I’m not really sure what the motivation is or how they operate.  They are somehow able to jump from one person to another and there is no indication that it is happening.  Janelle ends up possessed and when Damon tries to exorcise her, the demon manages to jump into their daughter, unbeknownst to Damon.  Flash forward ten years later and Damon has grown out his hair and become a surfer. I’m not making this up.  Even though he seems to have given up exorcising demons, his team informs him that his daughter is possessed and that he has to remove the demon before her eighteenth birthday, which is happening soon. 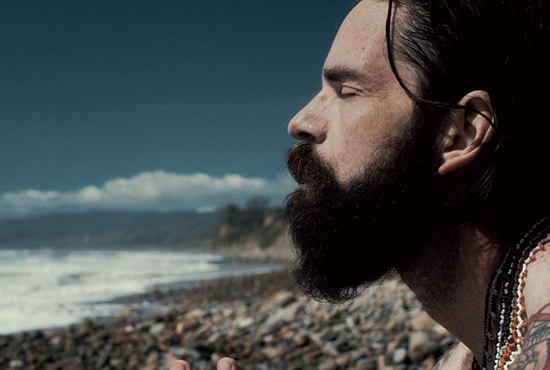 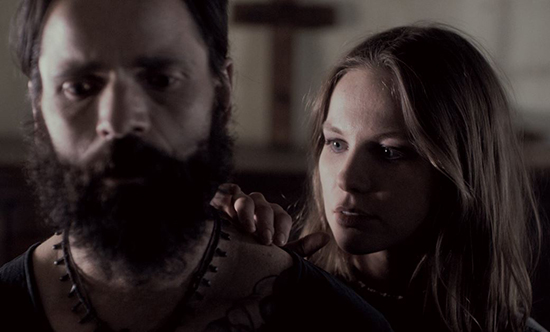 Damon’s daughter Caroline (Kate Tumanova) has never really known her father because she was sent to foster care when she was young,  and no one has ever told her that he was a demon hunter.  She parties a lot and seems to have the kind of friends that get into trouble.  It’s close to her birthday and she and her friends are partying in the woods, when Damon and his team are out looking for her.  It’s not clear why there are teenagers carrying guns in this movie.  Caroline has a girlfriend that may or may not also be possessed. Maybe she just acts that way normally. Caroline and her friend seduce boys and kill them. Her father is out in the woods looking for her to exorcise the demon and finds a cabin with symbols drawn on the walls.  What ultimately happens between them is confusing and the movie just sort of ends. 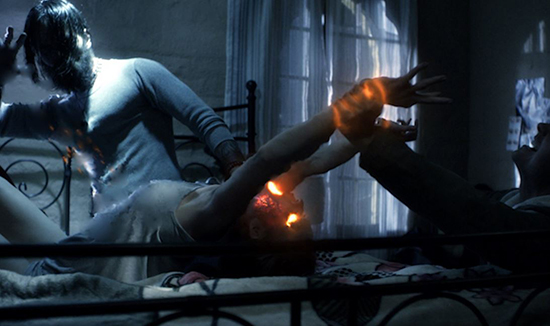 It is possible to make a really good film on a low budget, but this film fails in every way possible. The acting is poor, the editing is not well done, and again nothing about it makes any sense. 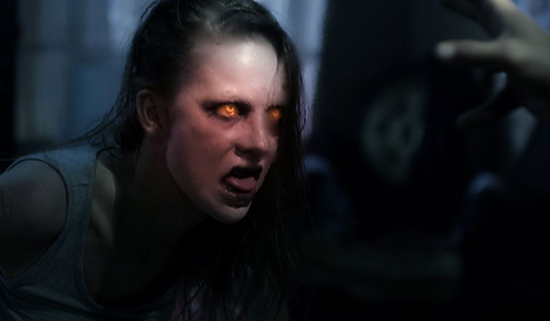