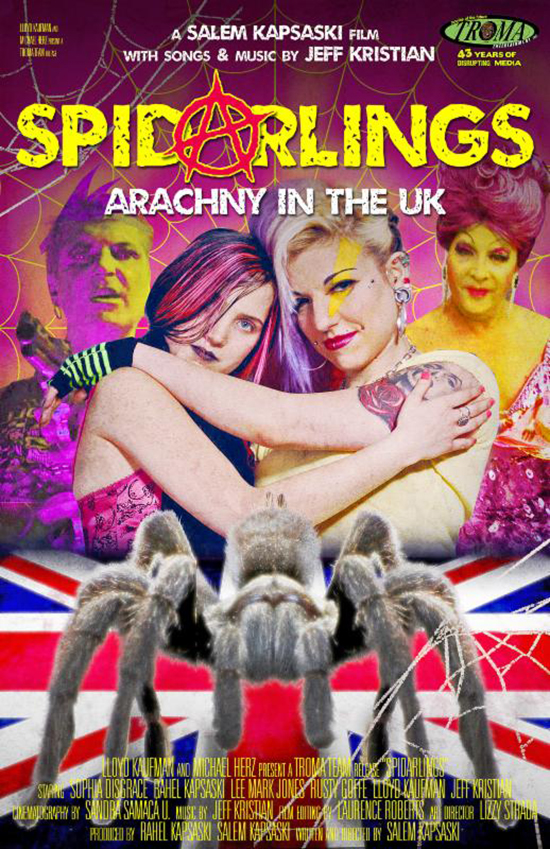 Poverty stricken lovers Eden and Matilda have enough trouble just getting through the days, but when Eden buys a pet spider the real troubles start.

In the annals of cinema horror, you have your smattering of filmmakers who are so good at directing chillers that they can use the format as an experimental laboratory and add elements that push the weirdness factor to the extreme limit. Roger Corman pushed the levels of insanity in his Edgar Allan Poe series of films, bringing along black cats and pendulums with him. Terence Fisher’s Hammer Frankenstein series saw the stretching go on over the course of the series, with the not-so-good Baron’s activities finally landing him in an asylum in the final entry. Few other helmers, due to either constraints of talent or censorship, could do this. 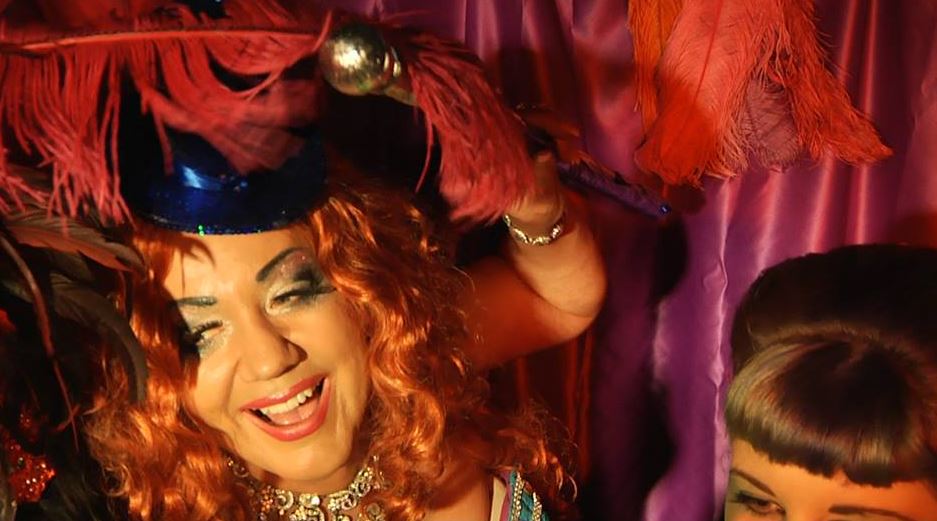 Fewer still are the producers who would dare fund directors to do this. In fact, I can only think of two: Harry Alan Towers of Fu Manchu series fame and other potboilers of the 60s and 70s, and the man behind the Toxic Avenger series, Lloyd Kaufman. Kaufman may stand above all, though, in his sheer willingness to back anything that shatters the glass ceiling of outrageousness completely and utterly. Well, while still keeping an ‘R’ rating, anyway. Teaming with the budding writer/director Salem Kapsaski (co-creator of tv’s London Calling), the maestro of the bizarre conjurs up his most eclectic and wild ride yet. Behold the musical/comedy/serial killer horror/lesbian romance mishmash that is Spidarlings. 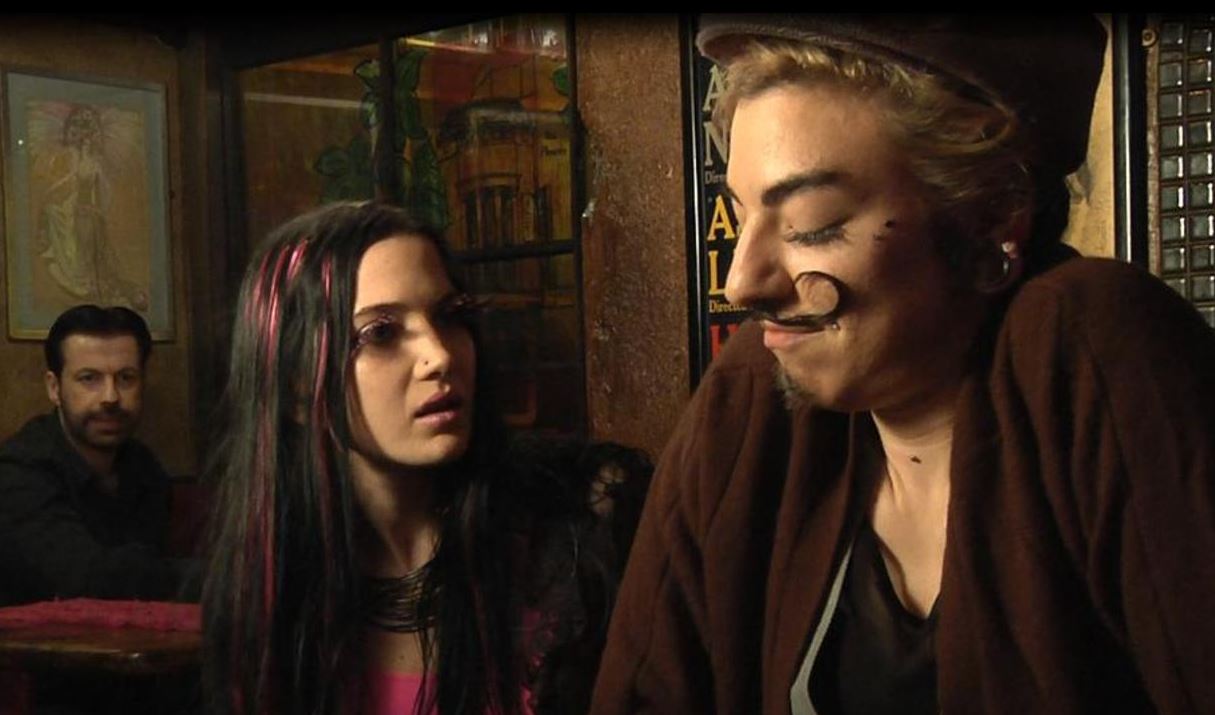 Lovers Eden and Matilda are two stripper/dancers barely eking out an existence at a seedy drag show club called Juicy Girls in London’s Soho district. Surrounded by a variety of on-the-extreme-fringe eccentric types, including a client who may be a stalk-and-slash type, the pair struggle daily to find a way out of their rut. That is the narrative in a nutshell. It is only the beginning, however, for Kapsaski (building from his promising writing debut with the wonderful novella Nazi Sniper for Sleazy Viking Press in 2015) and Kaufman, as they pull in every sick, twisted joke, deliriously goofy animation, dildo prop and bizarre plot thread from their combined arsenal they can. Truly, the outlined story is buried under the immense weight of this crazy window dressing. 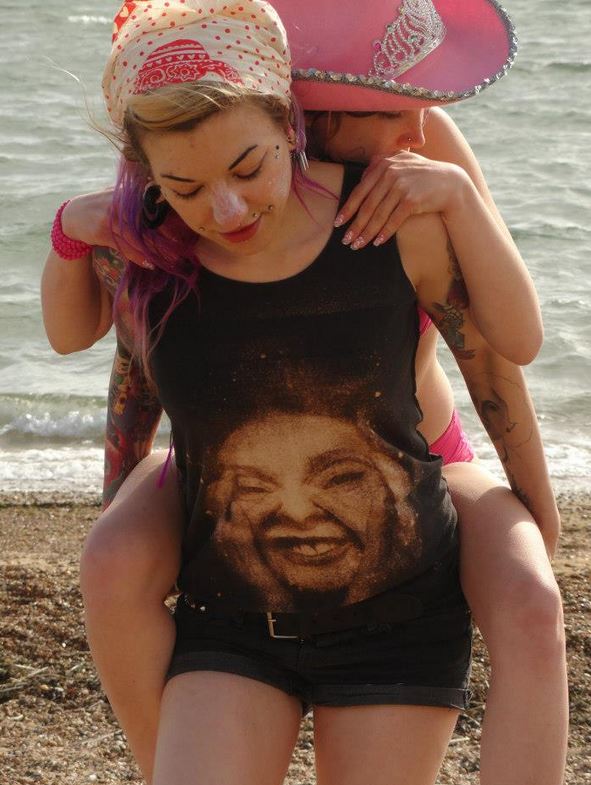 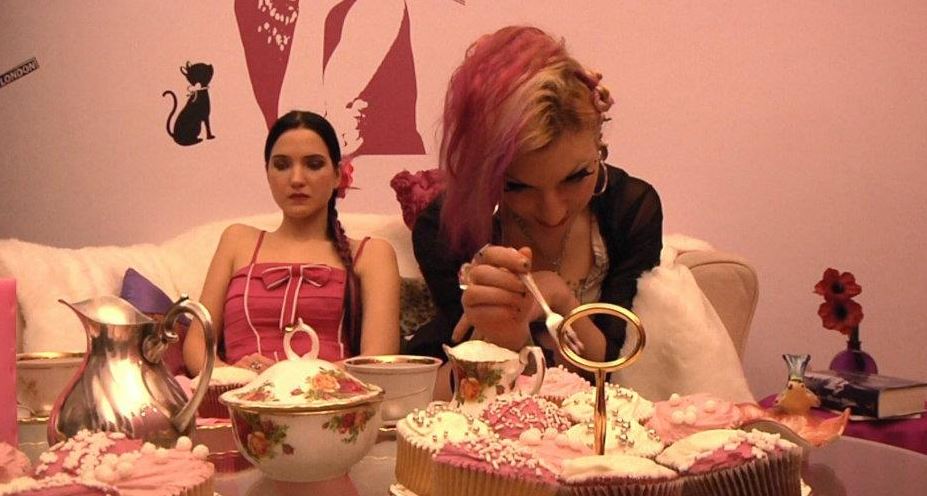 And this is not a bad thing as it covers up a multitude of problems usually addressed and avoided in solid but standard cinema. Right from the animated opening credits, the viewer can tell they are in for no ordinary movie. What follows in the musical interludes (colorful but interminable), a pet spider (with its own disturbing animated sequence), a guy sporting a penis rigged with a drill bit on the end, and some brief but graphic gore bits just seals the deal. Both Kapsaski and Kaufman seem heavily influenced in their respective careers by iconic auteur types of the past. A dedication to the late Ken Russell at the picture’s end and a poster of Andy Warhol’s Flesh, placed prominently in the girls’ apartment, would give a strong indication as to two of their idols. 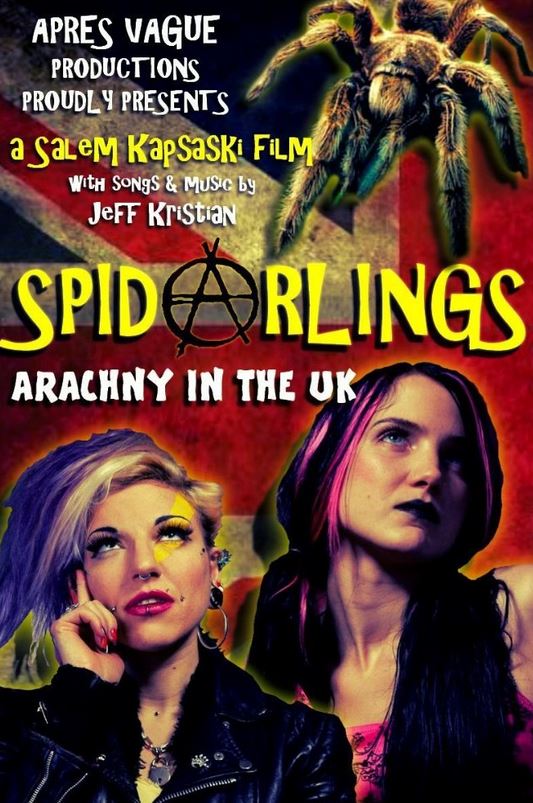 Thank goodness the wacky, cinema of the absurd style is there. It distracts from some less than stellar performances by a no-name cast and a lightweight script peppered with character types that are predictable for those of us who’ve already seen just about any of Gus Van Sant’s works. While the optimism of Rahel Kapsaski’s (the director’s sister) Matilda is infectiously enjoyable at first, the fact that she leans on it later exposes her character to grate a bit and it defeats any intent she has to flesh out the part. Worse yet is Sophia Disgrace, who spends much of the film seeming to be in a catatonic state, only livening up briefly in one sequence where she dons a moustache and glasses and affects a bad French accent for essentially a sexual roleplay/gag put on. Of the remaining support cast, Lee Mark Jones comes off the marginal best as the psychopathic club regular Ticks. Although he sticks with the stock affectations of the movie psycho, a giggler with several nervous habits, Jones inhabits the role nicely. 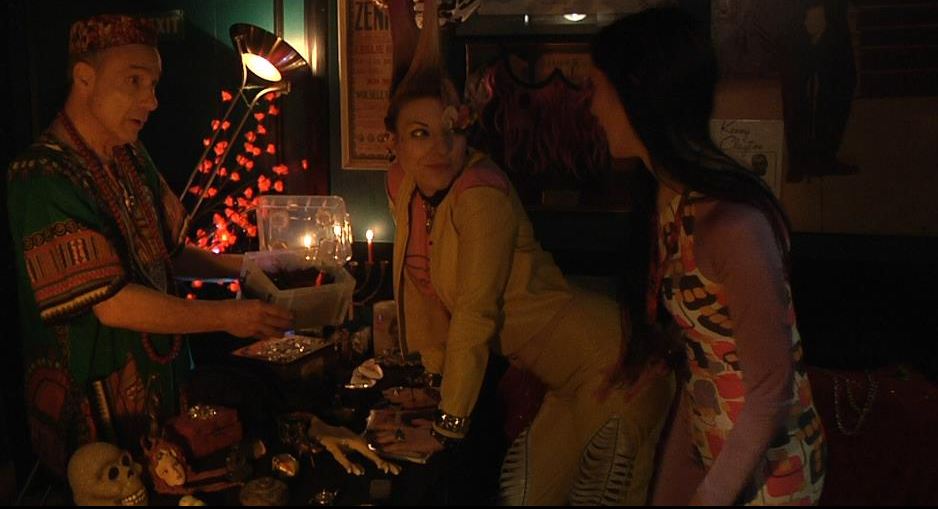 Observing Kaufman’s eclectic resume as a producer/showman, he appears to be little concerned that his films are unlikely to be trumpeted for Oscar consideration and completely ok with the fact that a dozen Best Picture winners together could not hope to match the gleefully overt wackiness that even one of his projects provides. In that, Spidarlings succeeds all too well. Just ask Kaufman, himself. Or the guy wielding the penis with the drillbit head.