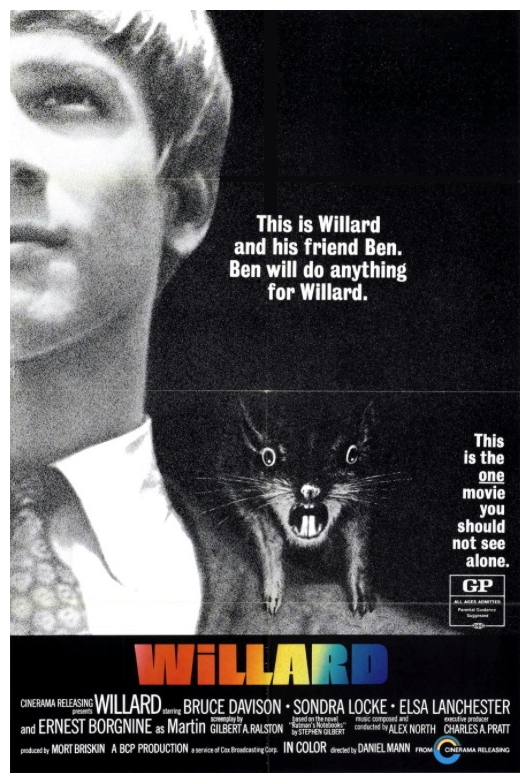 “A social misfit, Willard is made fun of by his co-workers, and squeezed out of the company started by his deceased father by his boss. His only friends are a couple of rats he raised at home, Ben and Socrates (and their increasing number of friends). However, when one of them is killed at work, Willard goes on a rampage using his rats to attack those who have been tormenting him.” (courtesy IMDB)

Alfred Hitchcock‘s The Birds (1963) is set in a quiet township on the Californian coast. Out of a clear sky, literally, comes a murderous assault from seagulls, crows, finches – the entire bird kingdom. The birds are not monstrous in appearance, they are just birds. But in other respects they are every bit as much monsters as the giant ants in Them! (1954) and the film follows the conventions of the monster movie closely. These conventions move in pre-ordained stages as rigid as the conventions of a Greek tragedy, if not quite as dignified: The establishing of a peaceful normality; the first hints of menace that disturb the calm; the slow build-up of tension, the first witnessed attack; and the apocalyptic finale in which the monster would normally meet its end. The Birds marked a turning point in cinema’s attitude towards the vulnerability of our lives, and the possibly vengeful power of nature. Humanity’s position at the top of the evolutionary tree has looked very shaky in many films ever since. 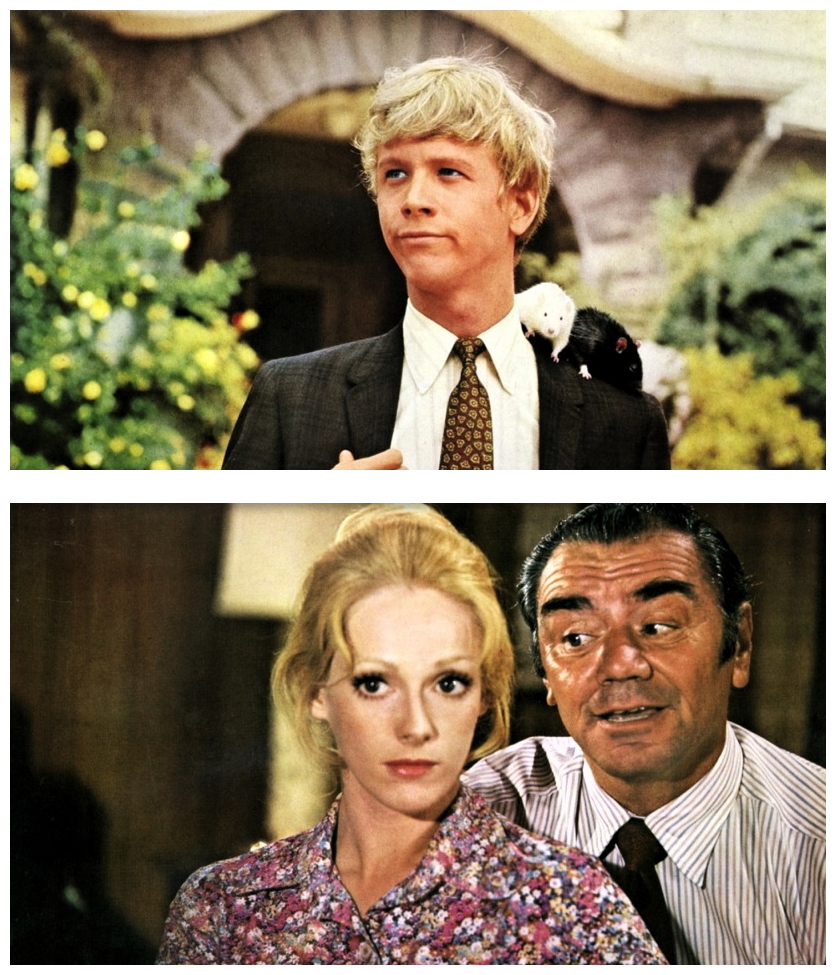 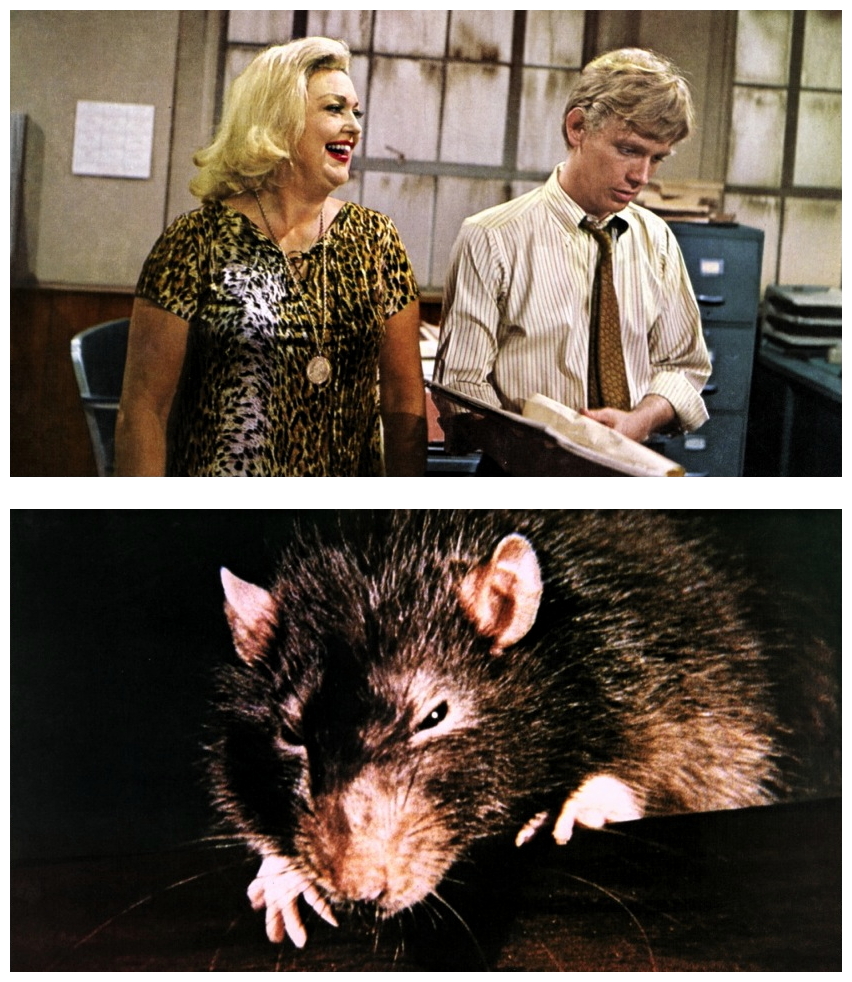 There were even films in which the whole of Mother Nature herself is out to get us, like The Hellstrom Chronicle (1971), Frogs (1972), Day Of The Animals (1977) and Long Weekend (1978). Rats were at the centre of Willard (1971) directed by Daniel Mann and produced by ex-crooner Bing Crosby. Based on the novel Ratman’s Notebooks by Stephen Gilbert, the film focuses on Willard Stiles (Bruce Davison), a friendless social misfit who develops a strange affinity for rats. He lives in a large Victorian home with only his senile old mother Henrietta (Elsa Lanchester) for company and is embarrassed when she throws him a 27th birthday party populated by her own geriatric friends. Retiring to the backyard, he tosses pieces of his birthday cake to a rat and, the next morning, he feeds more rats while imitating their squeaks. 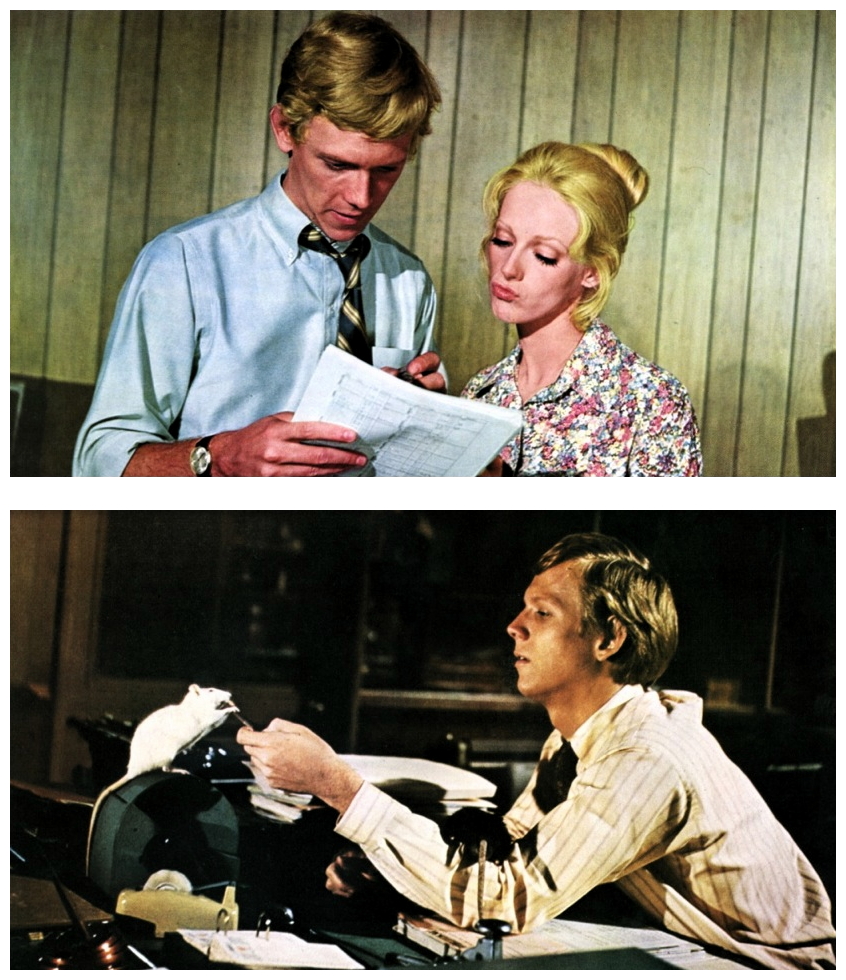 Willard has an office job but he’s constantly late and failing to meet deadlines, and his manager Al Martin (Ernest Borgnine) won’t let him forget about it. We also meet a sympathetic young co-worker named Joan (Sondra Locke). Mother insists Willard kill the rats, so he lures them into the centre of a derelict empty fountain intending to drown them all at once, but guilt gets the better of him, turns off the water and allows the rats to escape. He starts playing with one rat he names Queenie and teaches the rats words like ‘food’ and ’empty’. A white rat becomes his best friend and he names it Socrates for his wisdom. Numerous other rats quickly emerge, one of which is a large black specimen he names Ben. At work, Martin continues to pick on Willard, refusing him a pay rise then suggesting he sell his house. Later that night, while Martin is having a dinner party, Willard releases a suitcase full of rats and directs them to eat the food and generally ruin the party mood. The next day Willard’s mother dies and he finds out that the house is already heavily mortgaged. 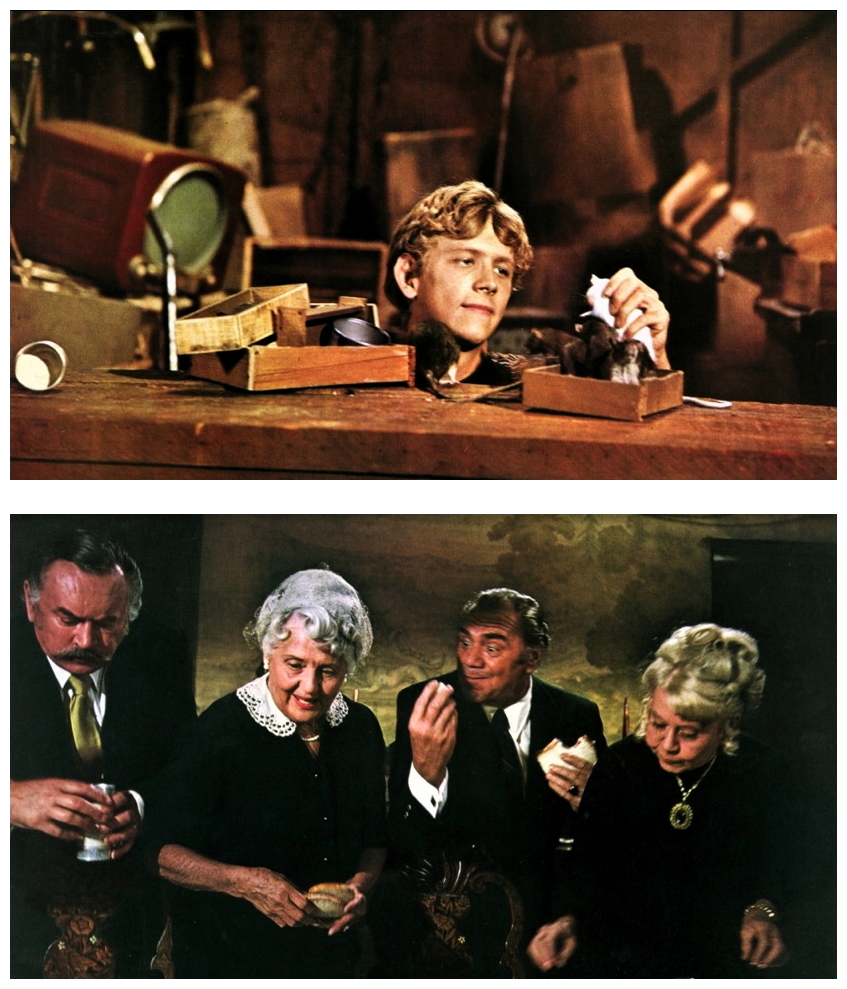 Virtually homeless and his army of rats getting too big to feed, he decides to steal from his work and breaks in using his trained rats to ‘tear up’ the doors. Later, back at home, Willard gets mad at Ben and starts putting him outside the bedroom, but Ben persists in sleeping in his room. This is the first hint of something strange about Ben, as he is put outside then immediately reappears inside Willard’s room. Is he just super-smart, or super-fast, or is there something supernatural about Ben? Does the big black rat have some sort of evil influence over Willard, or is Ben a figment of Willard’s guilt-ridden imagination? Socrates and Ben represent the subconscious ‘Good’ and ‘Evil’ in Willard, traditionally envisaged as tiny arguing angels and demons. Willard gets into the habit of bringing Ben and Socrates to work in his briefcase and hiding them in the stationery cupboard. One day the rats are seen and Martin bludgeons Socrates to death, then confronts Willard about the recent theft. 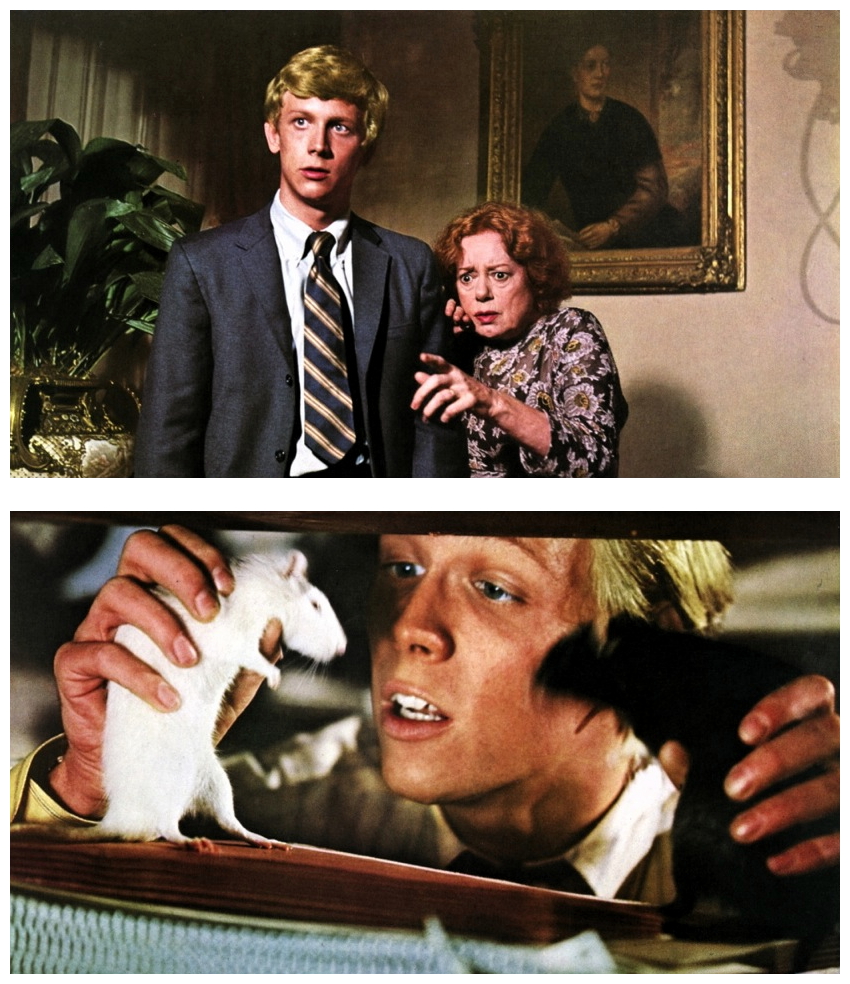 Shocked by the death of Socrates, Willard returns to work that night and, in the film’s most powerful scene, instructs his army of rats (now led by Ben) to ‘tear up’ Martin. Riddled with guilt, Willard then abandons Ben, goes home and begins sealing up any holes through which the rats could gain entry. He also puts as many rats as he can into cages and drowns them in the backyard fountain, all in an attempt to redeem himself and get his life back in order. Some time later Willard tries to have dinner with Joan at home, but is interrupted by visions of Ben, and soon encounters hordes of rats running up from the basement. He ejects Joan from the house, locks the door behind her and starts preparing rat poison. Ben recognises the box and squeals loudly, ordering the army of rats to attack Willard. He runs upstairs but the other rats come after him. Shutting the door, he stands there terrified. The rats gnaw through the door then gnaw through Willard, his last words to Ben: “But I was good to you!” 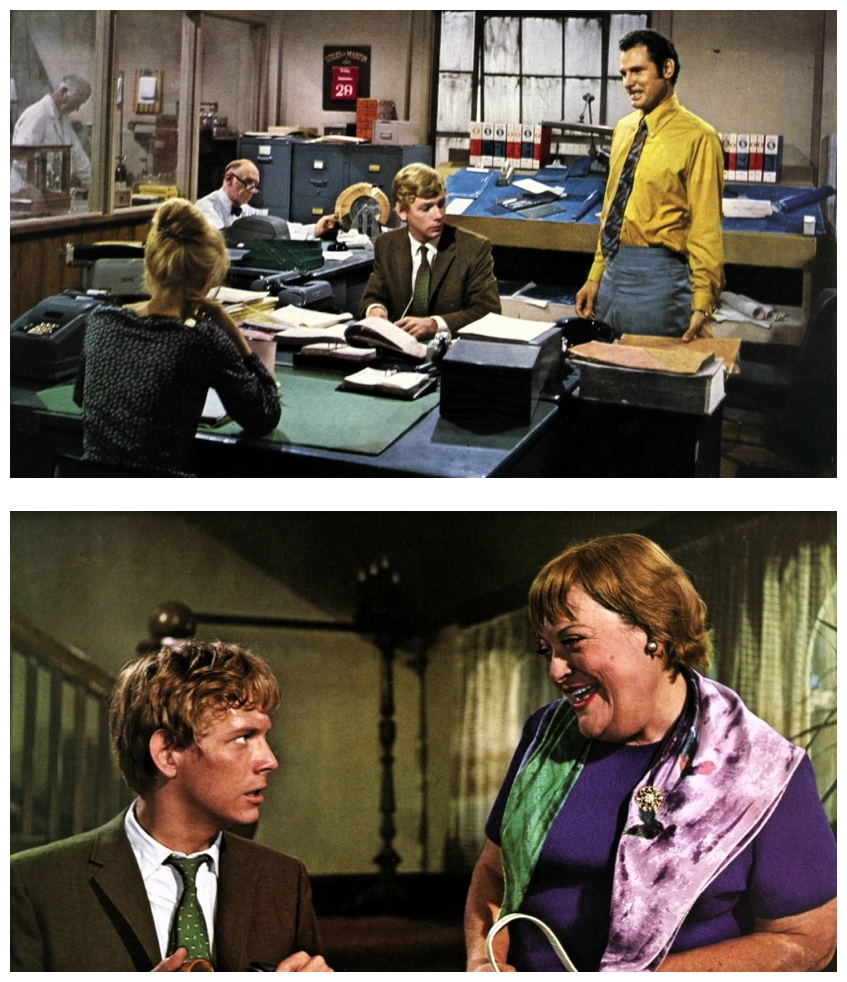 Willard was the surprise hit of the year with good reviews and even better box office returns. Some say it inspired films with wild animals as predators like Jaws (1975), and psychological thrillers with social outcasts as protagonists like Carrie (1976). Unlike most ‘Nature-Strikes-Back’ films, it’s the human characters rather than the animals that drive the story to its climax. The title character is played with great skill by Bruce Davison, communicating his despondency with family life as well as with his job, and his character actually grows during the course of the movie. Willard was one of Davison’s first films, but could be seen more recently in X-Men (2000), Words And Pictures (2013) and Get A Job (2016), and on television in The Fosters. Willard has a love-hate relationship with his senile mother played with the usual charm one expects from the delightful Elsa Lanchester. Both beautiful and intelligent (she was married to Charles Laughton in the twenties), the diminutive Lanchester played both Mary Shelley and the title character in Bride Of Frankenstein (1935), and was hilarious in the detective parody Murder By Death (1976). 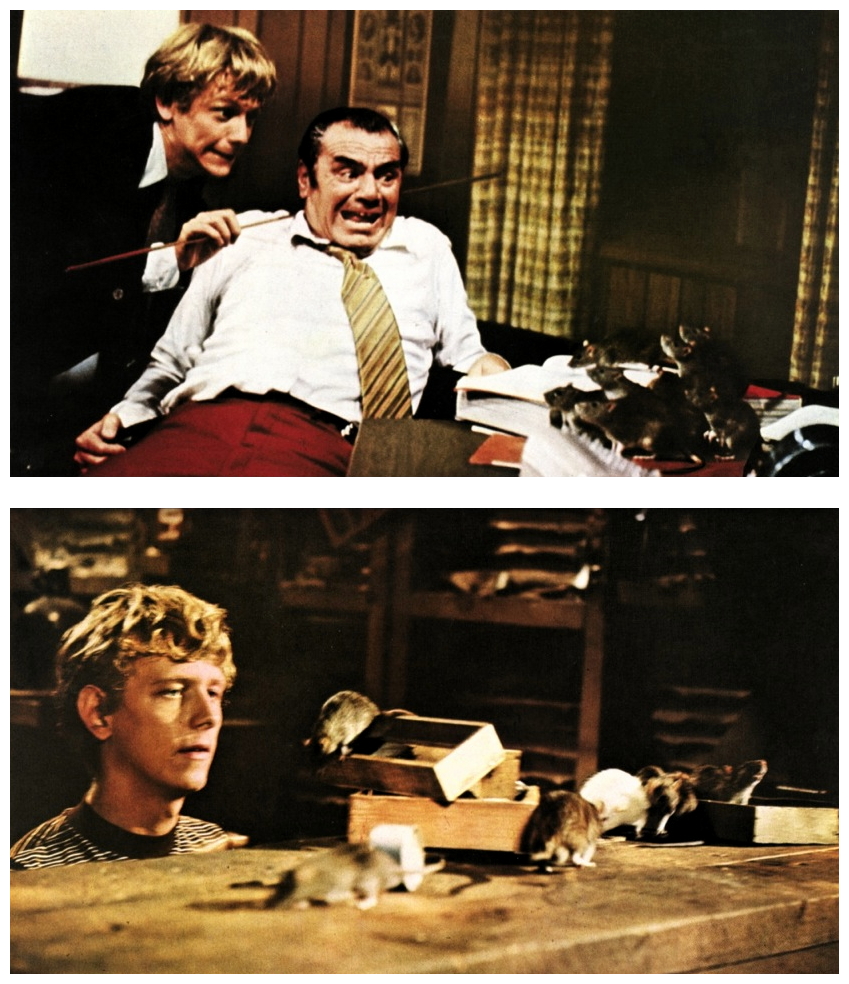 Joan is played by Sondra Locke, who was nominated for an Oscar for her debut in The Heart Is A Lonely Hunter (1968) and worked her way down from there. Clint Eastwood‘s partner for thirteen years, it may come as no surprise that Locke’s best efforts are also Eastwood’s: The Outlaw Josey Wales (1976), The Gauntlet (1977), Every Which Way But Loose (1978), Bronco Billy (1980), Any Which Way You Can (1980) and Sudden Impact (1983). Willard’s relationship with his mother’s friends is distant and, with his employer Martin, downright disastrous. Martin is played with relish by Ernest Borgnine, making the audience feel little sympathy for his fate. Borgnine had to work hard for his money, firstly overcoming his fear of rats and, secondly, being smeared with peanut butter to attract the rodents during his death scene. Bing Crosby Productions offered him a choice of a higher salary or a percentage of the box office and, after grossing US$20 million, Borgnine kicked himself ever since for choosing the higher salary. 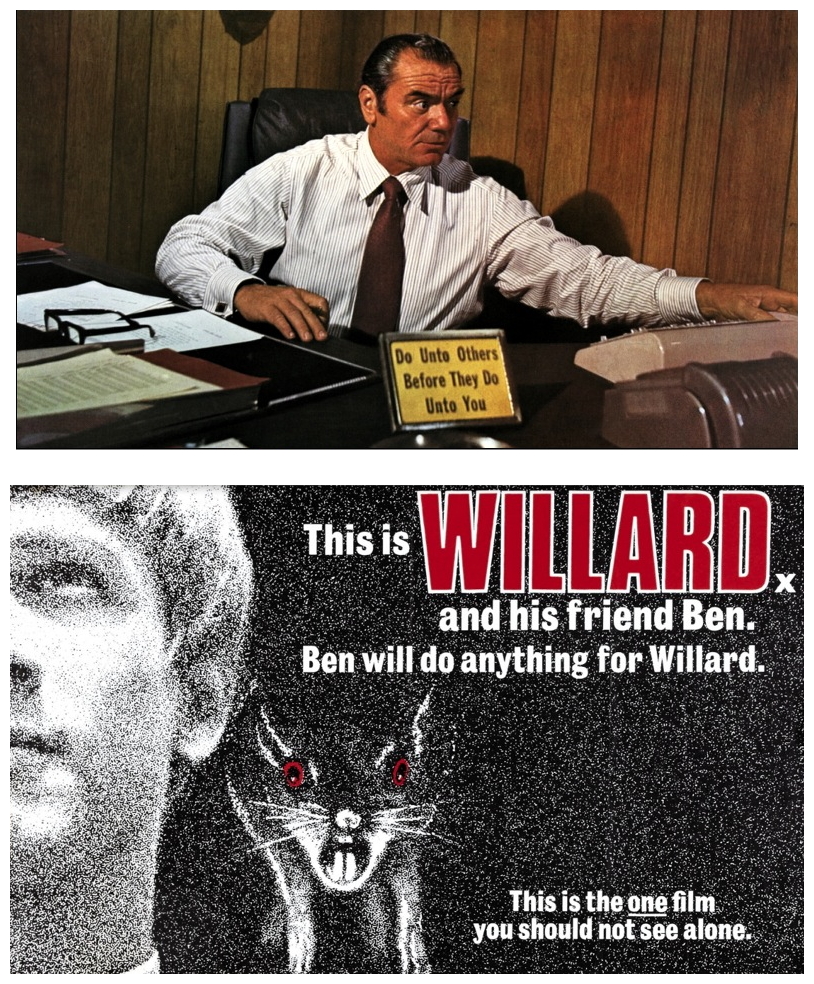 Audience satisfaction is sometimes cut short when the antagonist’s demise or comeuppance is brief or of little intensity and relatively nonviolent, but sometimes visceral satisfaction is realised fully. One of the great ‘satisfaction’ scenes of horror cinema is Martin being torn up by rats. He is a consummate creep and the cowardice he displays is memorable, arguably the best scene in the entire film. Willard is a character-driven drama with a touch of black comedy and, even when it does become a horror-revenge drama, it’s quite bloodless. There’s a strange tone to this film – much of it feels like a flat romantic comedy or a made-for-TV movie about a socially inept put-upon young man trying to find some sort of target in life as destiny conspires against him. Leonard Maltin: “Touching story of a boy and his rats captured public’s fancy at the box office, but the film’s lack of style prevents it from being anything more than a second-rate thriller.” Willard proved popular enough to warrant a sequel but, since our protagonist has been killed off, the producers were left with little choice but to follow the adventures of Ben (1972), but that’s another story for another time. Right now I’ll implore you to join me next week when I have another opportunity to give your cinematic sensibilities a damn good thrashing with the ugly stick for…Horror News! Toodles! 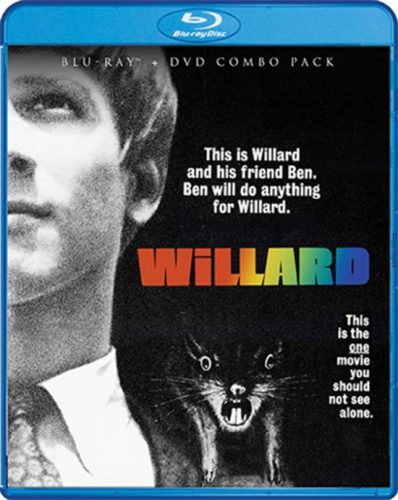 Willard (1971) is now available on bluray per Shout factory