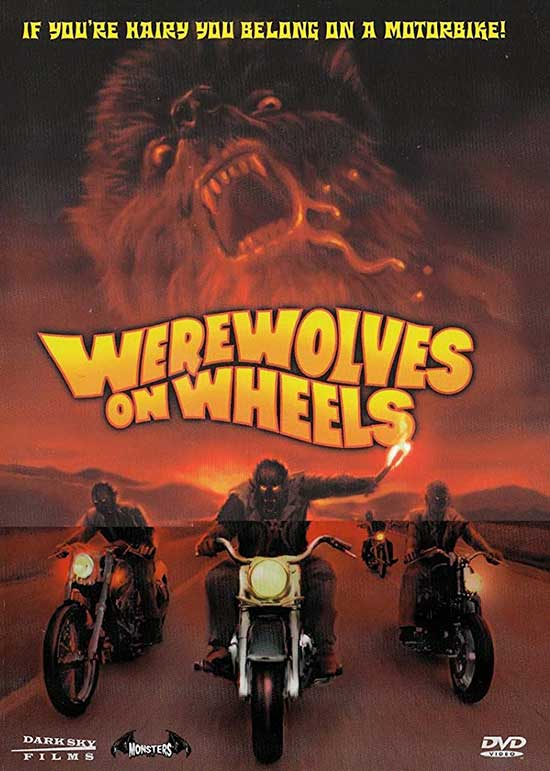 A biker gang visits a monastery where they encounter black-robed monks engaged in worshipping Satan. When the monks try to persuade one of the female bikers, Helen, to become a satanic sacrifice the bikers smash up the monastery and leave. The monks have the last laugh, though, as Helen, as a result of the satanic rituals, is now possessed and at night changes into a werewolf, with dire results for the biker gang.

You’d think a movie about a Hell’s Angels type biker gang dealing with some of their Members turning into werewolves would be a fun B-movie romp. It’s a concept that’s both silly and interesting enough that someone with a modicum of talent can do something entertaining with it. After all, just a few years ago someone managed to make a movie called Wolfcop and have it be really fun. Sadly, Werewolves on Wheels failed miserably. How can something involving biker werewolves end up being so dull? 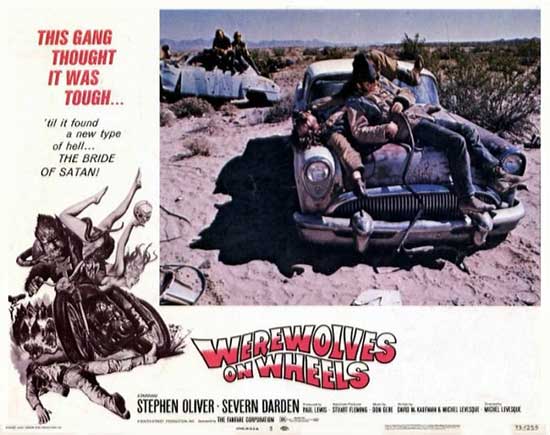 The film centers on a biker gang called the Devils Advocates that seems to spend most of their time making a general nuisance of themselves. One day the group runs across a group of monks who ply them with food and stuff.  The bikers decide taking food from robed strangers is a bright idea and take them up on the offer. Later that night, the monks, who were actually Satanists, perform a ceremony that seems to have the goal of placing a curse of some of the members of the Devil’s Advocates. Shortly thereafter, the gang’s members start getting picked off one by one each night, looking as if they’ve been torn apart by a wild beast. It is soon revealed that some of their own have become lycanthropes, which leads to a violent confrontation. 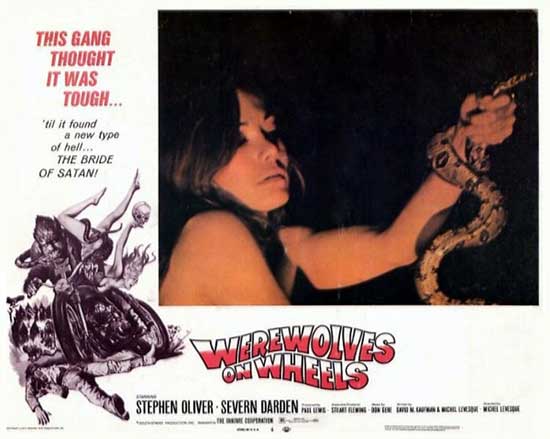 What made this movie such a laborious experience to sit through is it had serious pacing issues. It seemed like scenes would go far longer than they need to. The worst offender is when the film shows us the satanic ceremony. It could have been trimmed down to half is length to make its point. However, it’s like the director didn’t understand that we don’t need to see every second and hear every uttered syllable to understand that they’re doing something evil. There are several more scenes that could have been shortened to help make for a much tighter and more energetic experience. Instead, everything feels slowed down to a crawl, and when people finally start dying, you’ll be lucky if you’re paying attention anymore. Heck, I wouldn’t blame anyone if they turned off the movie at this point. 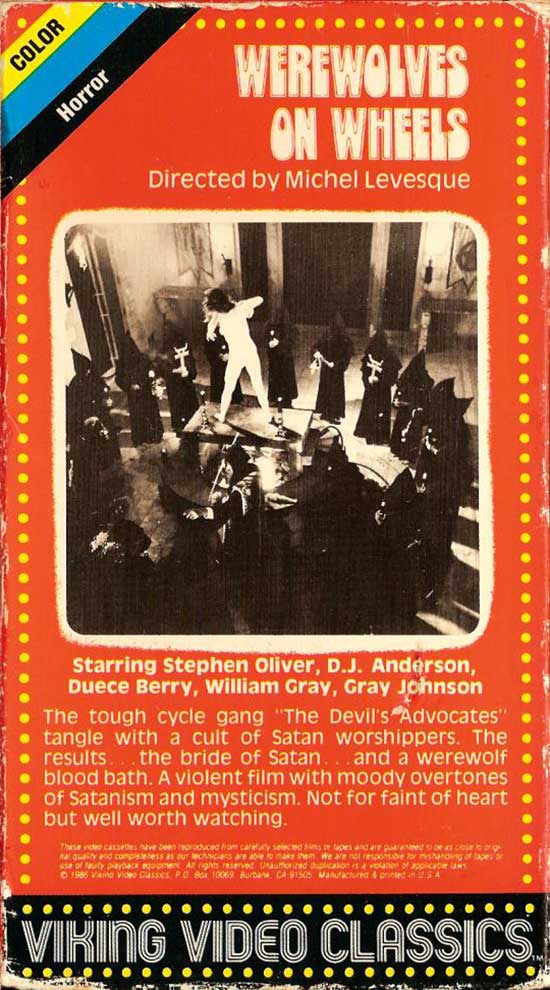 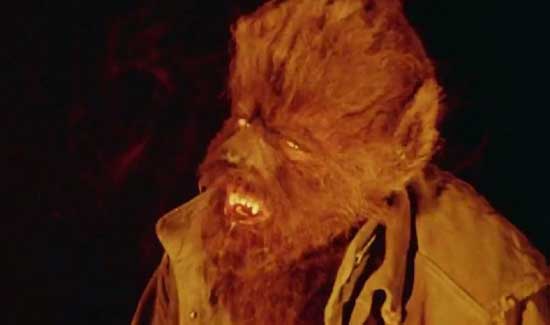 None of the characters were particularly interesting, and they weren’t all that likable either. They just seemed like a bunch of jerks who were making trouble for the sake of making trouble. The gang acted like a bunch of bullies, not just to regular people but to each other as well. This made it hard to really get into or care about their fates. To be fair, I’ve never been into the whole biker thing, so it could just be a case of me not being the target audience. It’s to the film’s credit though that the guys portraying the bikers were pretty believable in their roles because, with a few exceptions, they were actual members of a real biker gang. They weren’t afraid to be who they are and to not waste time trying to make us like them. 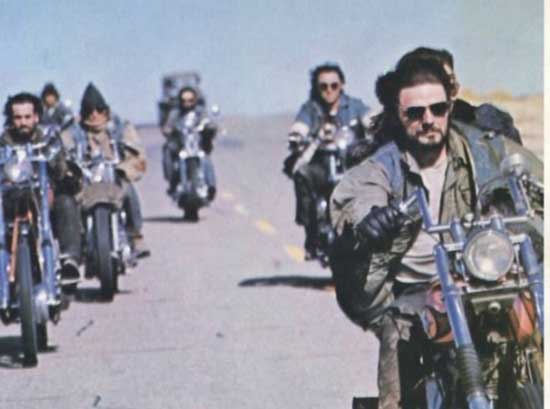 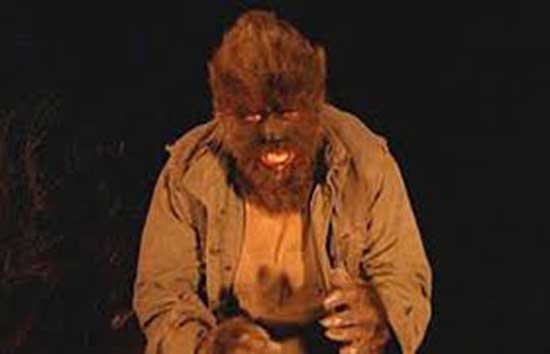 With that said, I should warn you that the acting in this film is still quite bad, and the writing is pretty terrible too. At least the directing was at least competent, the production value was better than I expected, and cinematography was fairly good for the most part. I had a couple of issues with the sound quality, but that could have just been the copy of the movie I was watching so I’m not going to harp on that point too much. The very few special effects there were in the movie were, for the most part, fairly good. Nothing that’ll blow anyone’s mind, but it was adequate for what they had to work with. 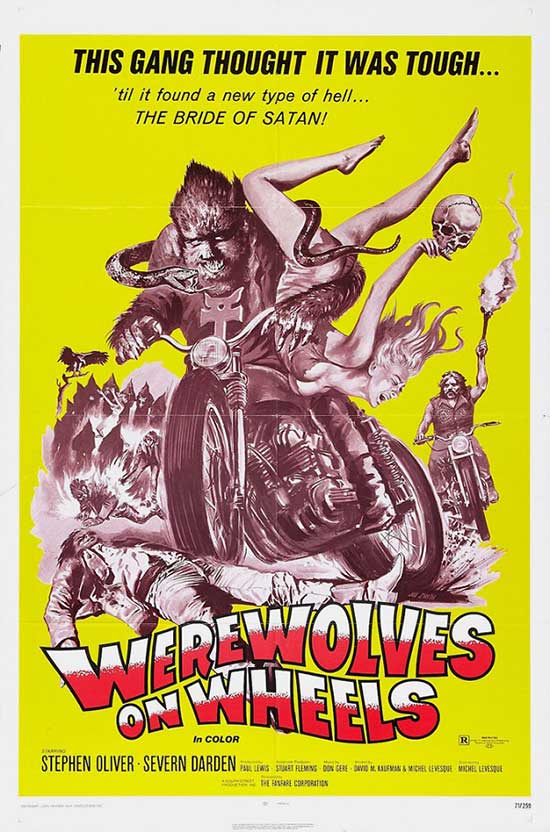 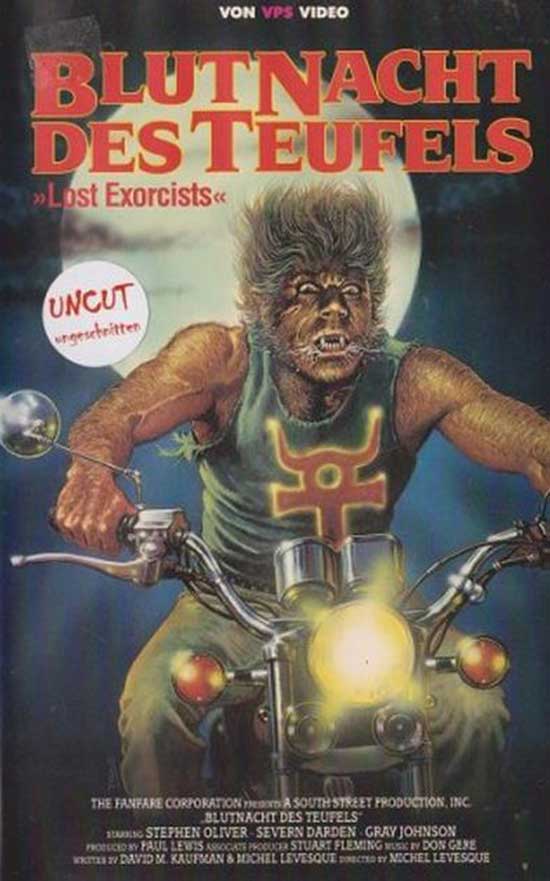 Overall, I can’t say that I enjoyed Werewolves on Wheels. I know that the film has a minor cult following, so it’s at least resonated with some folks. There were a few positives, (and seeing a werewolf try to ride away on a motorcycle was kind of hilarious), but I found it too plodding and dull to keep my attention. If you’re a die-hard fan of the biker movies of the late ’60s early ’70s, you like it better than I did. However, if that isn’t your scene, you may want to pass over this particular B grade flick.