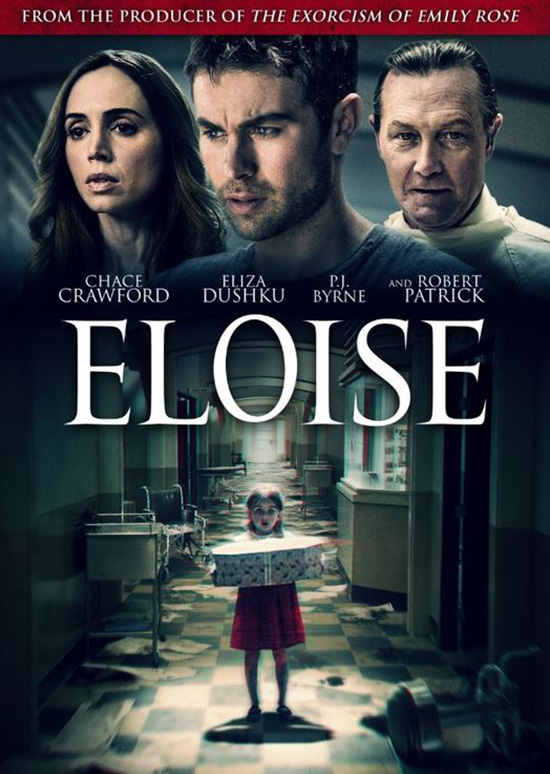 Four friends break into an abandoned insane asylum in search of a death certificate which will grant one of them a large inheritance. However, finding it soon becomes the least of their worries in a place haunted by dark memories.

Robert Legato, who directed Eloise, received Academy Awards as part of the teams on Hugo (2011) and The Jungle Book (2016), for Best Achievement in Visual Effects.  Eloise is full of visual effects, some of them more original than others.

Jacob Martin (Chace Crawford) learns that his estranged father has passed away and is summoned to a meeting with an attorney who informs him that he will inherit a very large sum of money, but there is one catch. He must produce a death certificate for his father’s sister, Genevieve (Nicole Forester), who was locked away in an insane asylum called Eloise, 30 years ago.  Jacob hasn’t been back to his hometown in years and while he’s there, he gets together with his old friend Dell Richards (Brandon T. Jackson) for drinks at a local bar, where they meet the owner, Pia Carter (Eliza Dushku).  Jacob tells Dell about the money he will inherit if he gets a copy of his aunt’s death certificate.  All of this sounds really simple, except that things are never this simple in movies.

When Jacob goes to the administrative offices for the now closed down asylum Eloise, he is told that his aunt’s records are sealed and that it will take several months or longer to request the death certificate.  Dell and Jacob find Scott Carter (P.J. Byrne) from an internet search, who just happens to be an expert on Eloise and has blueprints to the old buildings, which Dell and Jacob need to break in and find the records they need. When they go to meet Scott at his house, they discover that he is actually Pia’s brother, mentally handicapped, and very hyper active, and that Pia takes care of him.  What started out as a simple plan for the two of them to break in to Eloise and get the records has now turned into a much different plan including Pia and Scott being part of the break in.

When the four of them break into the asylum, Scott is having the time of his life, while everyone else is searching for the records Jacob needs.  The records are a mess and not in any sort of order, so as expected, everyone splits up. Of course, no abandoned insane asylum movie would be complete without an evil doctor doing awful experiments on patients.

There are flashbacks of Dr. H.H. Greiss (Robert Patrick), who did all of the terrible things we’ve already seen done to mental patients in horror movies. The spirits in the hospital are not friendly and once everyone is alone, they seem to prey on each person based on what that person’s fears are.  Even though the acting was pretty solid, the more I watched the movie, the more plot holes developed. I thought the special effects were good, but several times I was reminded of other films.  For some reason certain sequences reminded me of Thirteen Ghosts (2001), which is I think is a superior film, but that doesn’t mean that this one wasn’t fun.

One by one, each character has to confront their own personal nightmare as they become more and more lost in the building.  Along the way, Jacob finds out the truth about his family’s past. The flashbacks were a little confusing to follow at times, and the film left you on your own to figure out what was going on, which isn’t always a bad thing.  I certainly enjoy a film that makes me think, but there were a few things I thought they could have explained a little better in the storyline.

I felt like the ending was pretty predictable and again there wasn’t really much of anything new here I hadn’t seen before, but I didn’t dislike the movie. It managed to deliver a few scares, and it was entertaining overall.