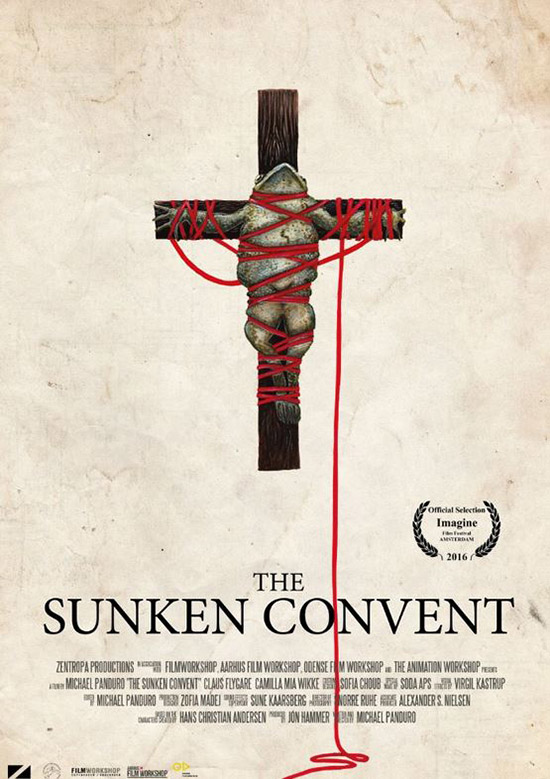 A man wakes up, he goes to work, he eats in, he does a bit of home surgery, he drives to the woods. Told without words and inspired by Hans Christian Andersen, ‘The Sunken Convent’ is a grotesque and slightly surreal story of bad habits.

More short films, kiddies! Today we have a film from Denmark called Det Sjunkne Kloster (the Sunken Convent), written and directed by Michael Panduro. The film has been nominated for  awards at several film festivals and won the jury prize for Best International Film at the Feratum Film Festival.

The film is inspired by the story from Hans Christian Anderson of the same name. In that story, a traveling magician approaches a convent in storm, seeking shelter. The Abbess refuses him and refuses to allow her nuns to help, either. One nun prayed for him and was mocked by the others. The magician punishes their cruelty by sinking the convent into the sea, the innocent nun with them.

The young nun’s paramour, a good knight, finds the convent gone and cries to see her once more. A voice makes him a promise that as long as he comes at the same time every evening, a red ribbon will allow him to pull her from the sea for a short visit. The caveat is that no one may see them together. Alas, on a full moon night, a traveler spies them and the nun returns to the sea. In anguish, the knight throws himself in after her and drowns.

Now this is all very romantic and standard fare for a Hans Christian Anderson story. This film, however, takes the general concept of the story and goes somewhere else entirely.

The role of the knight is played by Claus Flygare. In the film, he is a lonely man with some very unusual habits. Some pretty gross habits, actually. There is no dialogue in the film. We follow the man through the strange rituals of his day. And when I say strange, I mean completely bizarre.

Nothing is explained to us (the viewer). We just have to figure out what these behaviours are about for ourselves. The film is surreal, a bit gross at points, and seems to make little sense at first. But keeping in mind the original story that inspired this film, by the end it all actually does come together. Not the way you think, either. The message here is very different from the original fairy tale.

It’s beautifully filmed, using light and dark to its advantage. The special effects are nicely done. A little cringeworthy in a few spots, actually. There’s some really good stuff going on in this one.

So using my special short scale of one to five, five being awesome, I’m giving this film 4 frogs.