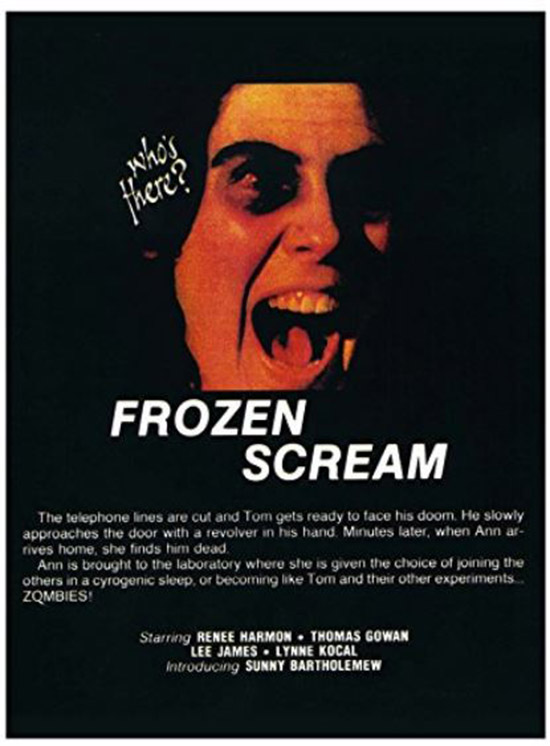 After the death of her husband a woman stumbles onto a weird conspiracy involving a pair of demented doctors trying to discover the key to immortality. Before you know it the corpses of the people they are experimenting on are up walking around and trying to kill anyone unlucky enough to come into contact with them.

On paper the plot of Frozen Scream may appeal to some viewers, especially the ones that are into zombie flicks. I went into it with pretty low expectations as it just didn’t’ seem that interesting to me. I knew about five minutes into it that I was right as it was one of the worst movies I have ever seen. We get pretty much all the necessary ingredients needed to make a horrible movie such as atrocious acting, horrible writing and directing, a confusing plot full of flashbacks (and apparently flashbacks within flashbacks) that don’t really make any sense or add anything to the overall plot, and an annoying monotone voiceover that drowns out most of the dialogue that it is playing over. I know looking at all that it may seem that Frozen Scream is one of those movies that is so bad that it’s good, but I assure you that is not the case at all. It is just plain bad. 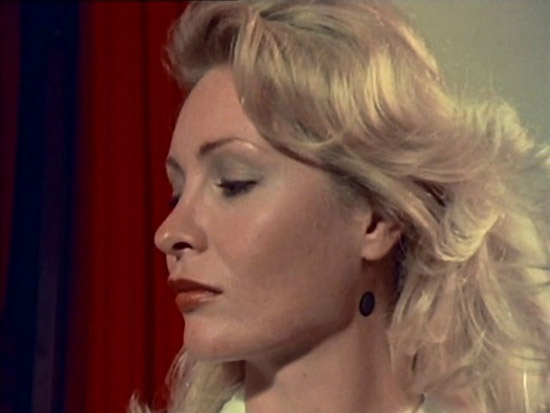 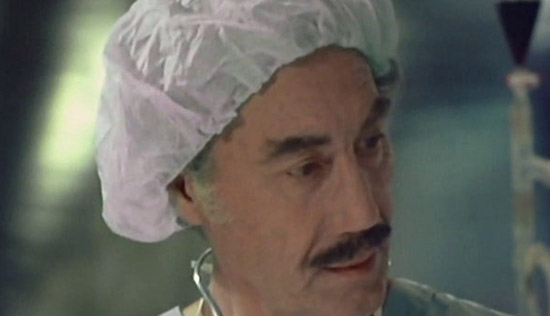 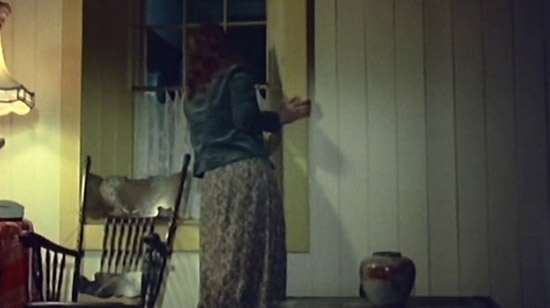 I think one of the biggest issues with the movie is the fact that the script is just horrible. It is obvious that the people behind it (it took three of them to write it?) didn’t really know how to write a screenplay and didn’t exactly know what they wanted to do with this film when they were writing it. It may have been a good idea initially when they came up with the premise, but the final result is nothing short of a total a complete train wreck and I can’t help but blame the people that wrote it. The screenplay (and the movie itself) is all over the place and is just a convoluted mess that is more confusing than anything else. I honestly wonder if they got together and looked over the final draft after working on it together and thought “Wow! We have an awesome script here and this movie is going to be a real winner!” Somehow I have my doubts but you never know. In their minds they may have thought that what they had written was pure genius but they were sorely mistaken. As a matter of fact I think that the screenplay should be used in film schools across the world to show students how to NOT write a script. It really is that terrible.

Did I mention that the acting is beyond horrible as well? Most of the people that appear in the film act as if they were strung out on sleeping pills or something and are more zombie-like than the few actual zombies that eventually show up way too late in the movie. Lynne Kocol, who plays the main character Ann couldn’t act her way out of a paper bag and it was hard to keep a straight face every time she was on camera reading her lines (it’s no wonder that she was only in one other film during her career). 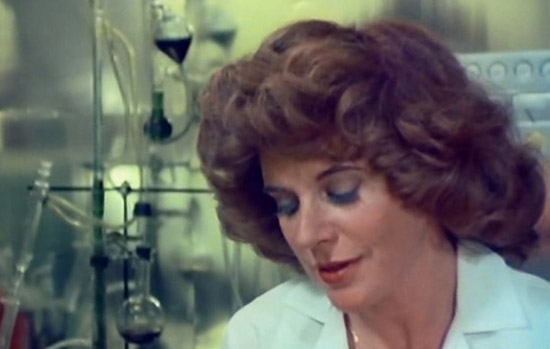 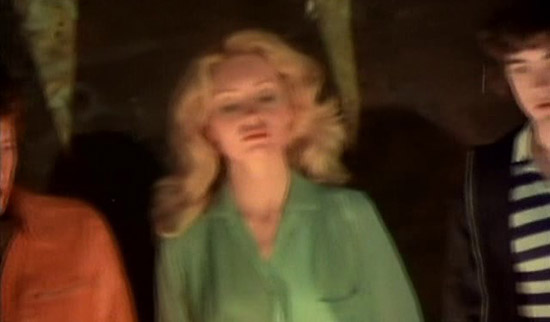 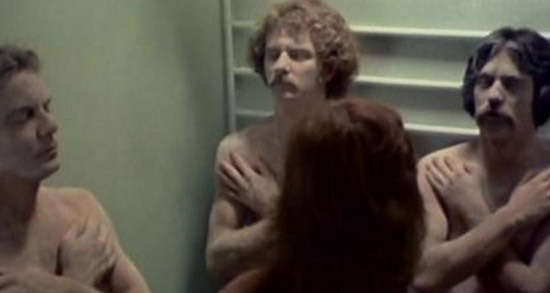 Wolf Muser is equally as bad as her husband Tom and other than screaming like a girl a couple of times in one scene he doesn’t really do much else (though the bit where he is attacked by a couple of dorks in hoods is hilarious thanks to his girlish screams as he tries to fight them off).  While no one in the entire film can act the worse is without a doubt Renee Harmon who plays the evil scientist assistant Lil Stanhope (this woman was actually an acting teacher at one time? Seriously?).  Not only can she not act but her voice is so annoying I had to mute my TV pretty much every time she was on screen. She sounds like your stereotypical evil female Nazi overseeing a prison camp full of innocent captives that has downed several bottles of Nyquil.  She slurs half of her lines and if I didn’t know any better I would swear that she was drunk while filming all of her scenes.  This movie has some of the worst acting I have ever seen and everyone who appeared in it should be ashamed of themselves. 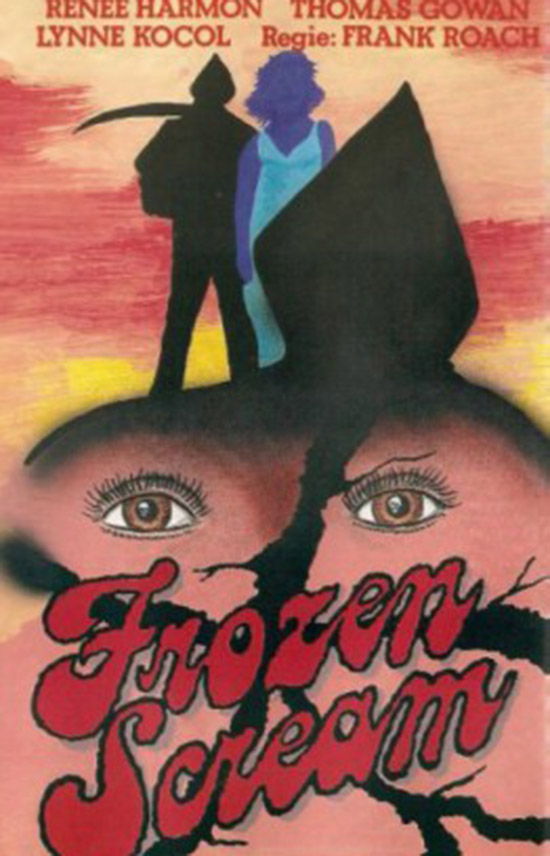 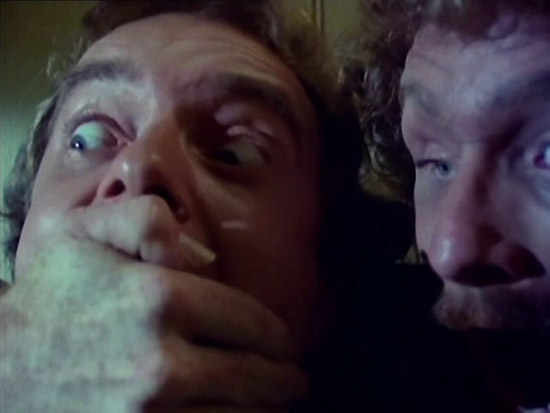 The ending is also just completely stupid and so far out there that I couldn’t help but roll my eyes when I saw it. I don’t want to give anything away because you have to see it for yourself (that is if you are brave enough to even try to watch this mess of a film) to see how idiotic it is. It is just as goofy-if not goofier-than the rest of the movie and if I actually cared anything about the main character I might have liked it because it is a down ending (at least I think it is supposed to be).  The only good thing about the film’s conclusion is that it is so hokey and corny that I got a good laugh out of it if nothing else. 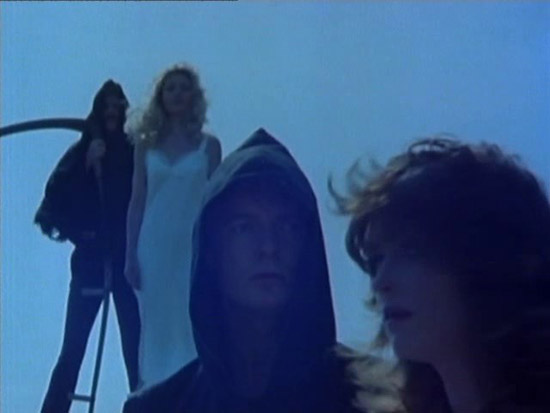 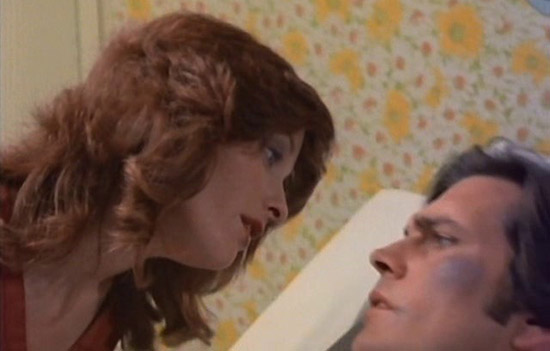 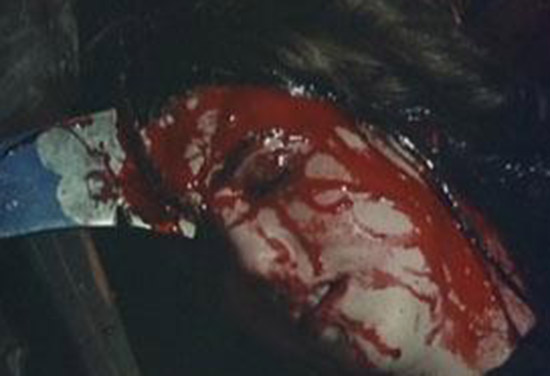 Believe me when I say that Frozen Scream is a true stinker. There is pretty much nothing redeemable about it and I think I actually lost a few IQ points watching it. It is boring, confusing, corny, and makes little to no sense for the most part. In addition to bad acting/writing/directing and that annoying voice over that keeps popping up we also get a scene where a terrible band belts out “Rock Around the Clock” but change the lyrics to “Jack Around the Shack” even though it is obvious that it is the exact same song (I guess they couldn’t afford the rights to the actual song and had to just go with what they thought was best though I am surprised they weren’t sued to hell and back as a result).  I hate to slam most horror movies and try to find at least something a little positive about them no matter how bad they were but I just couldn’t do it this time around. Seriously folks, avoid this movie like the plague and do something a little more interesting and entertaining like counting the blades of grass in your back yard or something.