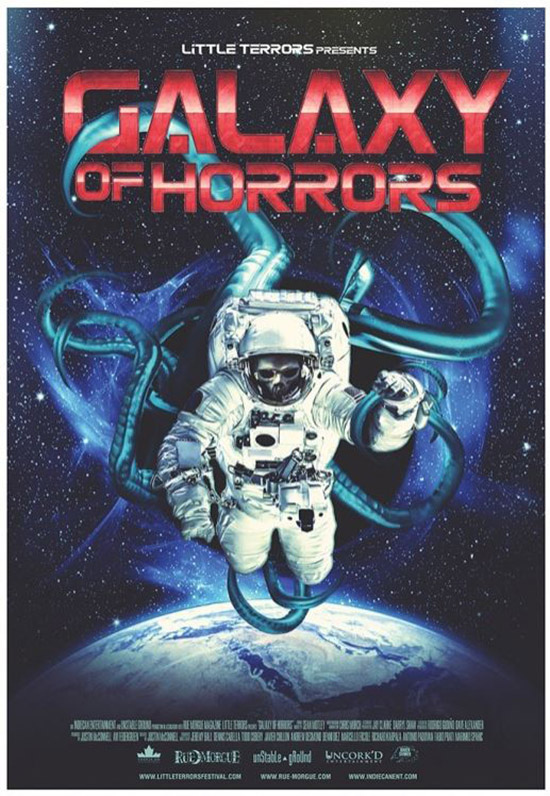 Aboard a spacecraft with a malfunctioning cryogenic pod a man watches 8 science-fiction horror short films.

Galaxy of Horrors is the second collaboration between Rue Morgue and the Little Terrors short films festival. Like the name suggest this has a science fiction wraparound. Due to the popular of anthology science fiction series Black Mirror this can initially feel like a shallow cash grab. Yet, some of the shorts contained within, like any anthology with a diverse enough set of filmmakers, are wonderful parables of the times we live in. It’s the sorting through that’s the tough part.

The wraparound is remarkably simple, but a step up from ‘Minutes After Midnight the first collaboration anthology. Adam Buller plays a man trapped in a decaying cryogenic unit which is showing him short films. As advanced as a technology cryogenically freezing someone is the entertainment system only contains low budget sci-fi films, next time they should really put on the Lion King or like Jurassic Park, something a bit more uplifting.
For the sake of time management, each short will be described next.

Eden – A first person short with a lot of exposition and no payoff. The ‘scares’ if there are any can be reduced to, some creepy kids in gasmasks. ‘Eden’ isn’t really horror, and falls into the short film trap of too much world building and too little message.

Iris – This is a short desperate to be a ‘Black Mirror’ episode. The lesson being that all of our cellphones hate us. Dave is trying to hide a dead body but his patronizing cellphone won’t let him. It’s a patently ridiculous script more a collection of contrivances than anything else. The cheapest sort of science fiction parable.

Flesh Computer – Cronenberg style body horror, there’s even a fly involved. The short never reaches beyond it’s budget or time. It’s a well made creepy short about a man who literally made a flesh computer, that’s really all is needed to be watchable. Add to that him being forced to lick the computers waste, it’s technological diarrhea, it’s flaws mainly in performance become dismissible. 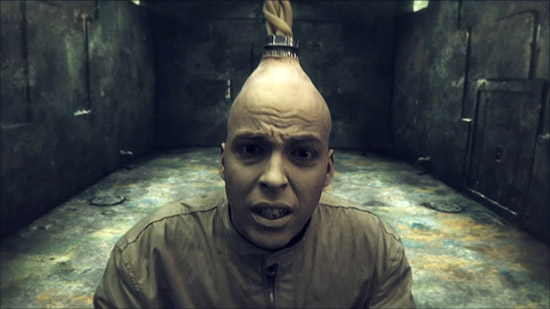 Pathos – Dystopian Spanish short, just not short enough. A man is hooked up to a machine via a large tube attached to the top of his head wherein he pays for emotional experiences. Visually interesting but that’s the extent of it. There is generally a patience tester in any anthology with 8 shorts, this is Galaxy of Horrors.

Eveless – Girls are no longer being born and thus it has fallen to science to get a man pregnant. ‘Eveless’ puts the short in short, and it relies solely on the fact that the viewer is not expecting a man to be giving birth or the slight shock that’s felt after the recently extracted baby turns out to be a man and the fetus is tossed into a fish tank. It’s a crude and juvenile short that thinks it’s being edgy but comes off as laughable. 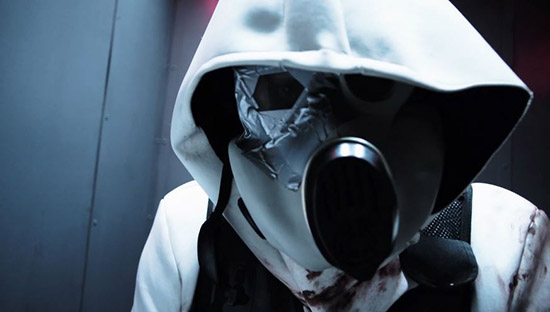 They Will All Die in Space – Woken from stasis, Alex learns that his ship has been damaged. Shot in black in white, it’s a classis close quartered science fiction story. It’s well acted so there’s an immediate engagement with the characters. The
Entity – A woman has survived the destruction of her space station to be left drifting in the eternal emptiness of space. Much like Gravity, but thankfully it doesn’t have an Sandra Bullock whimpering instead the characters drifting is substantially more psychedelic. The director shows their understanding of the short film format to tell a patient strange story, not to mention it’s beautiful to look at. 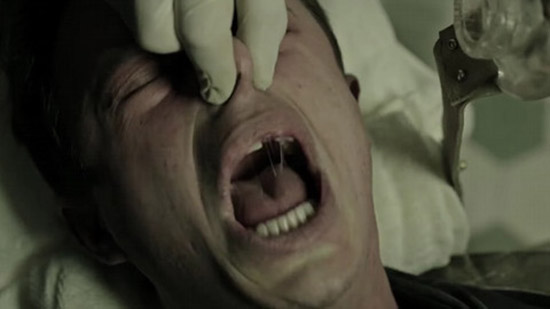 Kingz – Two nice young German boys just want to sell some cocaine. Alas, the man they’re attempting to sell it to is some sort of Goth alien cult leader with the fashion sense of a man who has seen the Matrix and thought by law everyone had to dress that way. The films production values are subpar when compared to the look of the other 7 but the story is interesting especially when one of the characters starts randomly doing martial arts.

All but two of the shorts are watchable, maybe not in a critical vain but each has it’s own reasons for keeping your attention. ‘Eveless’ and ‘Pathos’ aren’t good shorts but they won’t drive a man to the brink of madness by sitting through them.
On balance, ‘Galaxy of Horrors’ is an admirable followup to ‘Minutes Past Midnight.’ It’s not as versatile, having constrained itself into the theme of horror sci-fi, which is genre that veers into the nerve-grating territory more often than not. Still it’s a good watch if the viewer is hoping to find new reasons to give up on society and go live in a cave.