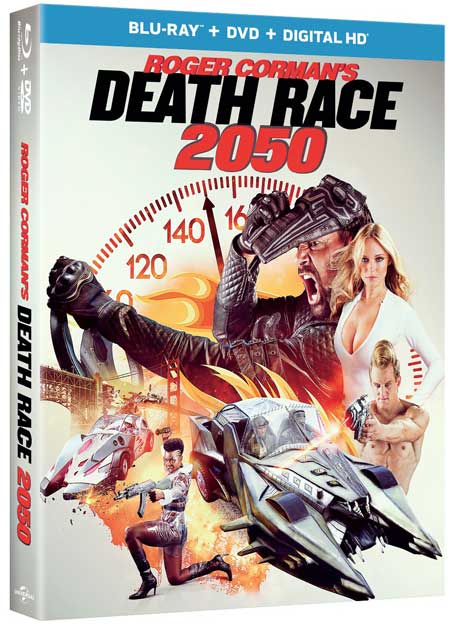 In the year 2050, America has been taken over by corporations, the countryside is a contaminated wasteland, and the population is unemployed, unmotivated and unwashed. To placate the masses, the ruling corporations present brutal and addictive virtual reality games, including the annual Death Race where champion drivers race each other while racking up bonus points for killing pedestrians. The corporations have grown tired of the reigning champion known as Frankenstein and intend to replace him with their own genetically engineered superman. Meanwhile, a rebel faction plots to stop the race and bring the corporations to their knees.

Before reviewing DEATH RACE 2050, let’s take a gander at its unusual genealogy. This is actually the second remake/remodel of 1975’s Death Race 2000 in less than ten years, and the previous remake Death Race (2008) spawned two sequels of its own- Death Race 2 and Death Race Three: Inferno. That’s a mighty leafy family tree for a movie that was devised as a Drive-In knockoff of a big studio film. 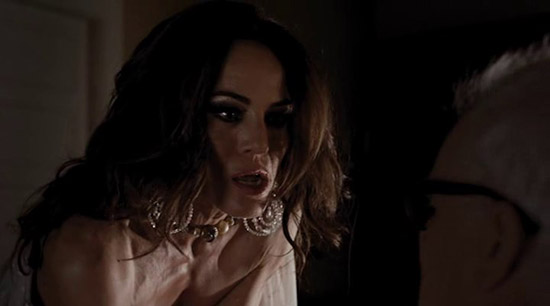 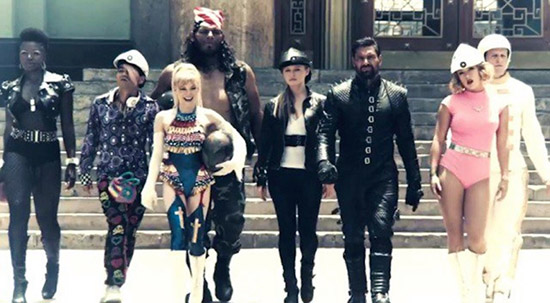 In 1975, United Artists released Norman Jewison’s futuristic sports opus Rollerball, wherein James Caan portrayed the champion in a violent sport struggling to maintain his individuality in corporate controlled America. Aside from its lethal skating scenes and some scary organ music, Rollerball stands as an earnest but tepid film that made a lot of money. Rollerball’s box office success inspired low-budget legend Roger Corman to purchase Ib Melchior’s dark science fiction story The Racer as the basis for a competing feature eventually titled Death Race 2000. The result was a rare case where a cheap imitator became a diamond that outshone the original.

Sensing that Melchior’s source story was too bleak for drive-in audiences, Corman turned to screenwriters Charles Griffith (Little Shop of Horrors) and Robert Thom (Wild in the Streets) knowing that satire was their strong suit. During production, first-time director Paul Bartel (Eating Raoul, Cannonball) added his own urbane sense of humor. Under his direction David Carradine (Kill Bill), Mary Woronov (Rock and Roll High School) and a young Sylvester Stallone (Stop or My Mom Will Shoot) delivered the kind of nuanced performances rarely seen in Drive-In movie fare. 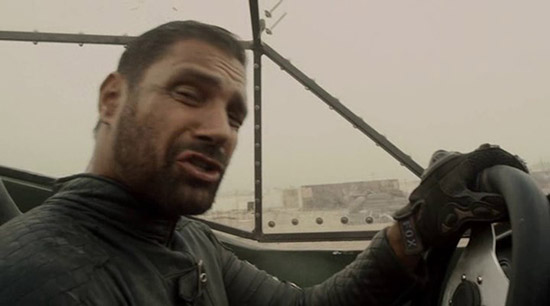 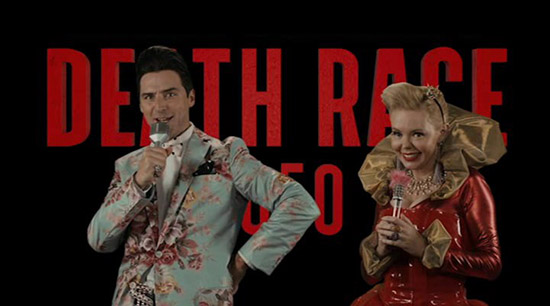 But after seeing the film’s rough-cut Corman decided to play down the humor while amping up the violence, resulting in blood-soaked reshoots done without Paul Bartel’s involvement. The result of their creative collision was a satirical film that still delivered the gruesome goods Drive-In fans craved while garnering positive reviews from the likes of Time Magazine and Rolling Stone. Like the films of Russ Myer, Death Race 2000 could be enjoyed by truck drivers and University Professors alike- and it made a mountain of cash. It stands alongside Rock and Roll High School as the peak of Corman’s New World Pictures era productions.

In 2008, the film was remade as Death Race. This time Roger Corman’s involvement was limited to cashing a check. But the remake omitted the subversive killing of pedestrians to score points element, which was like removing the carbonation from soda and still calling it pop. There are plenty of kick ass Jason Statham movies out there, so just leave Death Race on the shelf. Death Race also spawned two DTV sequels that occupy space and have mass. 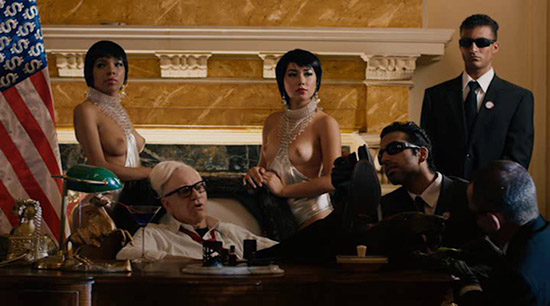 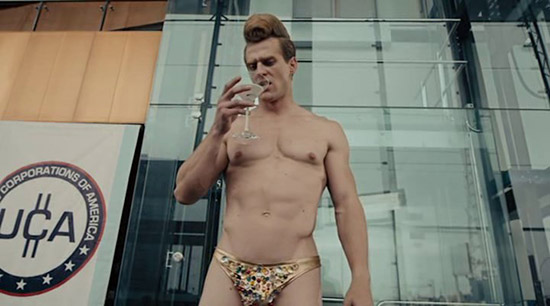 But Roger Corman still owned the story rights, and in 2016 he opted to do a hands on the remake, fast-forwarding the original into Death Race 2050. He cast Spartacus’ rival gladiator Crixus (Manu Bennett) as the champion racecar driver Frankenstein. Like the first remake, this one only leaves you nostalgic for the original.

The original’s sardonic humor has been replaced with a constant bludgeoning of obvious jokes that jump the line from satire to spoof. If that sounds like I’m being highbrow, just remember that original film was about a road race where characters name Matilda the Hun and Machine Gun Joe mowed down pedestrians to earn points while spouting dialogue like, “If they scatter go for the baby and the mother!” So I’m not whining over the loss of Preston Sturges subtlety here. 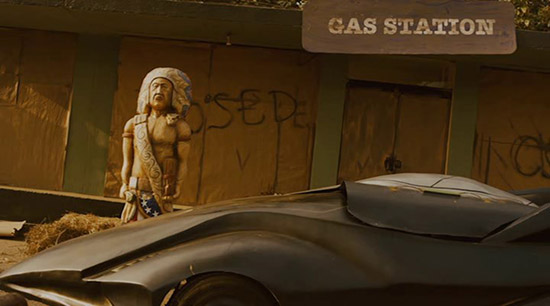 For its first ten minutes, Death Race 2050 shouts its vision of America’s future into your face- corporations run America, the people are unemployed, fat and lazy, and society has devolved into supersized, monster truck, reality television retardation. All this was funnier in Mike Judge’s Idiocracy because it revealed society’s devolution as the film progressed. It’s not so funny when a television host/de facto narrator screams it in your ear for the entire first reel. Satire works best when painted with refined brushstrokes, but writer/director G.J. Echternkamp opts for a roller.

That pummeling approach doesn’t end with the introductions because the director refuses to allow his characters a calm, reflective moment. Instead, he cranks their histrionics up to eleven hoping it will hold the audience’s interest. At the one-hour mark, the shrill hip hop singing racer Minerva (Folake Olowofoyeku) finally gets a subdued moment. Lo and behold this moment of personal reflection almost makes you sympathetic to her- except after an hour of only seeing her grating public persona you’re too numb to care. Likewise, the genetically enhanced driver Jed Perfectus (Burt Grinstead) is so amped up in every frame that his uncomfortably homophobic character becomes exhausting.

Our lead racer Frankenstein (Manu Bennett) fares better, though Bennett’s strongest attributes are wasted. Spartacus fans know that he gives great fight scenes and can bring a dry, almost arid sense of humor to even the darkest moments. In Death Race 2050, he isn’t allowed either. His first punch up with a group of rebel Ninjas is squandered on cheesy acrobatics, and even his fistfight with Jed Perfectus is played for laughs instead of a much-needed bare-knuckle brawl. On the plus side, Bennett does have a nice chemistry with Marci Miller’s character Annie, and it’s obvious these two worked hard on their scenes.

Malcolm McDowell is also on board doing his best Malcolm McDowell impression. He’s entertaining but clearly, doesn’t want to be there any longer than he has to be. You can almost hear him whispering, “Is my car close to the exit?” into the assistant director’s ear. 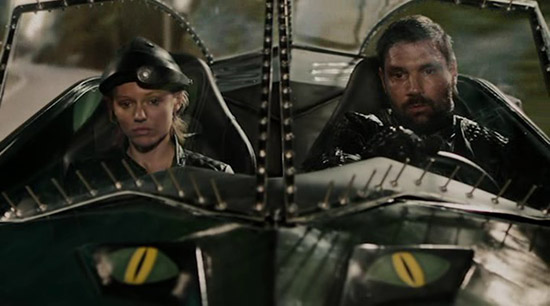 One of my favorite movie bad girls Yancy Butler is also along for the ride, bringing humor and a sprig of nuance to her role as the resistance leader.

But the film’s most glaring shortcomings are an over-reliance on cheap CGI and poorly shot/edited stunt scenes. The late Paul Bartel, director of the original Death Race 2000, was known for his humor, but he sure knew how to shoot a car crash. The chases and wrecks in this remake are way below par. And when will low budget filmmakers admit that CGI flames and explosions always look terrible? The action scenes also suffer from flat music, unimpressive sound effects, and a muddy sound mix. The new cars may look pretty cool, but their engines wheeze when they should roar.

Remaking a fan favorite is always dangerous, but in this case, the filmmaker’s screwed the pooch by dumbing down the original’s subversive elements, creating a one-dimensional spoof of its smilingly anarchistic parent. Death Race 2000 may have been a beer and pizza movie, but it was a hell of a good pie- Death Race 2050 just tastes like Dominos.