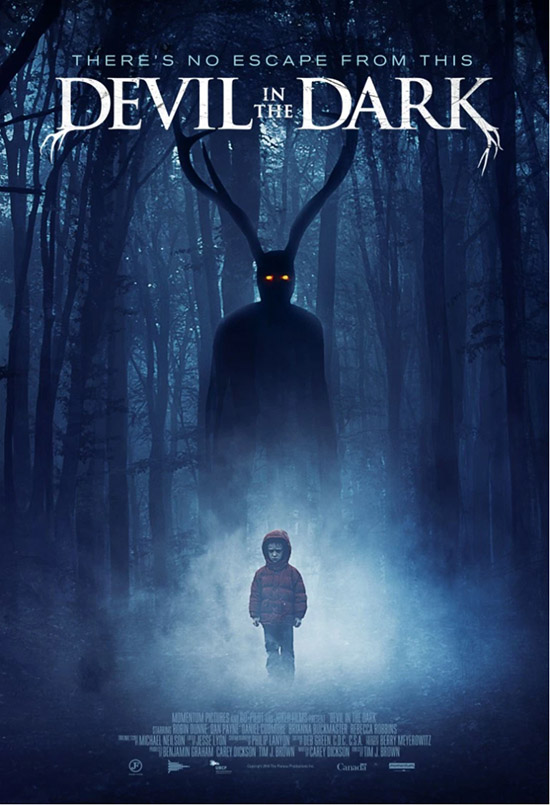 When estranged brothers Adam and Clint attempt to reconnect over a week-long hunting trip in remote Kelowna, British Columbia, they find the tables turned by a mysterious presence lurking in the forest.

Convinced that they are now besieged by a supernatural presence, the siblings begrudgingly agree on only one thing: they will have to put aside their differences and work together if they plan on making it out these dark woods alive.

There are a lot of ways to help people connect with a movie’s story, and one of the more effective ways, in my opinion, is to have the focus be on family relationships. Even in a horror movie, it’s easy to identify with characters who have family issues similar to our own. If you have a rather contentious relationship with a sibling, you might find yourself relating to our main characters in Devil in the Dark.

Devil in the Dark is about two brothers, Clint and Adam, who have grown very distant from each other over the years. The eldest brother, Clint (Dan Payne), stayed in the small town he grew up in and started a family. He’s even taken the same  blue collar job his dad once held. He’s the kind of guy that enjoys hunting, camping, and other outdoors activities. He sees Adam as a snide, unreliable, sarcastic jerk. When Adam suggests they go on a hunting trip together, Clint agrees to the idea in the hopes they can build a closer relationship.

Adam (Robin Dunne) moved out of their hometown as soon as he could and seems to go back as little as he possibly can. He lives in a big city and obviously enjoys the activities available in his urban locale since he’s never been one to enjoy the outdoors. He’s also doing okay for himself since he’s able to afford a Porsche. He finds Clint to be a judgemental, uptight, jackass. (Honestly, both brothers are kind of right about each other). Another source of the resentment he feels for his brother comes from the fact that their father seemed to favor Clint when they were kids. However, Adam appears willing to try to let go of the past and move on.

Adam’s suggestion of the hunting trip, however, has an ulterior motive. He keeps having nightmares about the forest they’re going to. Part of his motivation for the trip is to find out why he keeps having those dreams. The truth, he discovers, is linked to a time when he was a child and got lost in the woods. He had seen something while his father looked for him, but he doesn’t have any recollection of the event. He’s hoping to find some clue to why he’s having the dream. As the brothers go deeper into the forest, something inhuman begins to stalk them and seems very intent on taking Adam.

The main focus on the film, as you may have surmised, is on the brothers. These are men that seem to have nothing in common with each other beyond their familial ties. Their relationship is strained by years of simmering resentment, and the movie is about exploring those issues as both men try to overcome them. This is one of the strongest parts of Devil in the Dark. The characters are very believable as is their relationship with each other. Despite their differences, they do love each other and we get to see that show through. The moments we got to see that felt genuine and thankfully never sappy.

The movie was essentially a two-man show, where everything rested on the performances by both Payne and Dunne. Both men were more than up to the task of carrying the film. Their interactions with each other was convincing enough that you could almost believe they were brothers. They were forced to portray a large range of emotions, and they did so without ever crossing the line of over or under acting. They made their characters feel very genuine, and that’s not an easy thing to pull off. Kudos to both actors for what they brought to the table.

The movie’s main fault was its ending. When the monster makes its presence known, things were wonderfully creepy and tense. The creature itself looked fantastic the few times we get to see it. However, what the creature was after and why it was so intent on taking Adam was never explained, nor are we provided any clues to what it could be. Everything during the last quarter of the movie seemed rushed, and the confusing finale only reinforces that feeling. A little bit more time spent on exploring the creature’s motivations could have helped matters. Instead, the movie is hurt more than helped by the unanswered. 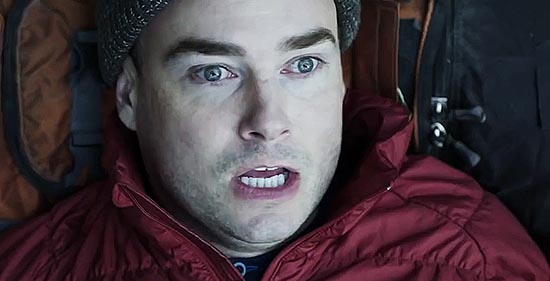 With that said, Devil in the Dark isn’t a bad movie. It’s a decent flick that is unfortunately hurt by a rushed and confusing ending. There’s worse ways to spend your time, but if you’re looking for something more action packed or gory you may want to look elsewhere.