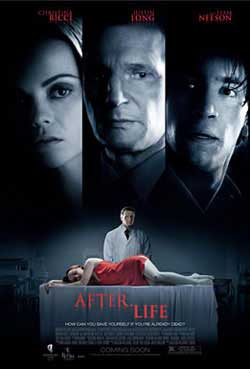 After a horrific car accident, Anna (Ricci) wakes up to find the local funeral director Eliot Deacon (Neeson) preparing her body for her funeral. Confused, terrified and feeling still very much alive, Anna doesn’t believe she’s dead, despite the funeral director’s reassurances that she is merely in transition to the afterlife. Eliot convinces her he has the ability to communicate with the dead and is the only one who can help her.

Trapped inside the funeral home, with nobody to turn to except Eliot, Anna is forced to face her deepest fears and accept her own death. But Anna’s grief-stricken boyfriend Paul (Long) still can’t shake the nagging suspicion that Eliot isn’t what he appears to be. As the funeral nears, Paul gets closer to unlocking the disturbing truth, but it could be too late; Anna may have already begun to cross over the other side.

Liam Neeson, Christina Ricci, and Justin Long…what do they all have in common? The new film directed by Agnieszka Wojtowicz-Vosloo titled After.Life.

Anna Taylor (Ricci) and Paul (Long) are in a relationship that isn’t without its problems. Anna, a local school teacher is at a point in her life where she has lost her zest for living. This has made it difficult to love and commit herself to her boyfriend Paul. Most of the time, the distant glazed over look in her eyes tells the story itself. Though as we learn a bit about her background it isn’t long before she finds herself in a car accident shortly after a dinner quarrel with her boyfriend. The accident proves to be fatal as Anna wakes up on a slab at the local mortuary. Eliot Deacon (Neeson) is the town mortician who is blessed with a special gift. He is able to see the dead in their spirit form while carrying on conversations with them.

Acting as sort of a guide, mentor and transitional liaison…. he provides certain answers to the dead as they awake in spirit. Though as he points out, this gift has also been a curse to him with the deceased usually not wanting to accept their revelation to move on into the after life. Anna is in denial, and her boyfriend Paul is convinced that she is still alive. Elliot goes about his day prepping the dead, setting up funerals and conversing with spirits as they are prepped for there funerals.

Though we begin to sense that all is not as it appears setting this from into a subtle series of clues that fringes more on a mystery tale than anything. Elliot who appears calm and collected under the surface may have a hidden agenda. One of which seems to be to also include local school boy Jack (Chandler Canterbury) into his bizarre trade and way of thinking. Jack, a student of Anna also has a subtle fascination with death. The recent loss of his teacher catapults that notion forward in the film as he begins to regularly visit the local funeral home.

As Anna is prepped, she walks about freely in the locked downstairs funeral home. Elliot visits her regularly as she tries to cope with death. His advice is not without concern for her own state and the life she is leaving behind. The life is full of regrets and choices that Elliot is intent on driving into her final thoughts before passing on completely. Can her soul be saved from a lifeless existence?

What makes this film original is that the viewer perspective seems to change as the story evolves. We are given clues along the way that force our own perspectives to run parallel with the characters perspective creating a truly unique cinematic experience. Film writers Agnieszka Wojtowicz-Vosloo , Paul Vosloo and Jakub Korolczuk have all collaborated in what appears to be a mixture of story motives that never are entirely very clear thru most of the film. Just as soon as one assumption is made, another steps into its place inducing a certain level of uncomfort for viewer resolutions. This uncomfort though comes with our own need to fulfill and assume rather than the journey the writers have chosen to direct us on.

Christina Ricci comes to the table with a strong role that surprisingly has her naked thru a majority of the film. Her beauty though carries over into death making her one of the hottest corpses to behold in a long time. Fans of hers will love the almost gothic nature of her character and circumstances.

Justin Long runs thru a range of emotions making him perfect fit for his role as Paul while Liam Neeson is unnervingly cool that fringes on a collected insanity. After.Life is a remarkably strong maze of life and death interaction. Brilliant in its plot line, all performances are top rate in this highly original piece.