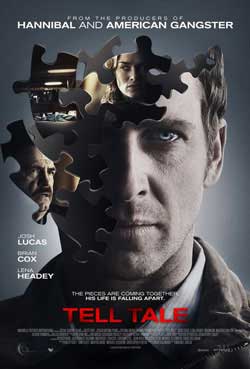 In this thriller inspired by Edgar Allen Poe’s “The Tell-Tale Heart,” Josh Lucas stars as Terry, a single dad who’s kept alive by another man’s heart — a scenario that suits him fine until he discovers that the ticker’s original owner was murdered. Worried that he might come to a similar end, Terry embarks on a desperate search for the donor’s killer in this Michael Cuesta-helmed film produced by Ridley and Tony Scott.

“Tell-Tale” is a modern re-telling of the classic story by Edgar Allen Poe, that bears absolutely no resemblance to its source material.

There are a FEW MINOR similarities or ideas, but what it boils down to is that it is a film about organ harvesting. Poe’s tale of insanity and paranoia has been turned into a organ harvesting thriller. Now the film isn’t bad, it’s actually pretty entertaining, but being a Poe fan myself, I would have preferred a take that keeps the integrity of the story intact. Directed by Michael (L.I.E.) Cuesta and starring Josh Lucas, Brian Cox, and Lena Headey, “Tell-Tale” may not be all that memorable but does offer up some solid entertainment.

Terry (Josh Lucas) is a single father who prides himself on being a great single father to a daughter with a genetic disorder that causes her bones to slowly fuse together. Terry has just recovered from a heart transplant and has a crush on Dr. Elizabeth (Lena Headey) who is overseeing his daughters health. He seems to be recovering from the operation, the doctor has a crush right back, and things seem great until………the thumping of his heart. It begins to beat louder when in the presence of someone that was responsible for murdering his donor. The thumping becomes so strong that it drives him to murder. He does his own investigating into the murder of his donor when he meets Det.

Van Doren (Brian Cox), who was on the case that was never solved. As Terry gets closer and closer to the truth, the thumping drives him closer to the brink of madness, his only grounding is the daughter that he loves, and that just may not be enough.

I was really expecting to see a film that would have resembled the story I grew up with and what we get is a thriller that throws you into the mix right away and while we never learn of the reason behind Terry’s heart transplant, a minor detail I suppose, there is a lot here to enjoy. Josh Lucas is proving himself to be a man who can carry a picture, switching from secondary character to leading man with ease. It is his performance the drives the film and I found him to be intriguing. Brian Cox is always a treat to watch. Here is no exception, playing his character with a bit of humor and still managing to be the devil on Terry’s shoulder. My only problem with the cast was that of Lena Headey. Her performance was what it needed to be, and Lena is a great actress, it is just that there was no real chemistry between her and Lucas. It wouldn’t be such a big deal if we weren’t supposed to by that they are romantic with each other.

If you’re a fan of brutal violence, when Terry needs to kill, there’s some great scenes of face crushing, severed limbs, etc. This is when the film shines and as tired as the organ harvesting plot has become, it works in the film and as Terry slowly becomes his donor in certain respects, these are the things that work and make for a fun ride.

I recommend “Tell-Tale”, even though the film suffers from an unconvincing relationship, side stories that have no conclusions, and almost no resemblance to the source material it was inspired by, it does manage to introduce us to an actor coming in to his own and able to carry a problem plagued film and make it fun and thrilling. Cuesta is a very strong director, directing episodes of great television such as “Dexter” and “Six Feet Under”, so the type of material is no stranger to him. “Tell-Tale” is fun and worth a view, maybe even two. The violence is the overly real type the tends to knock you back for a minute. Forget Poe, just expect a fun film that entertains.