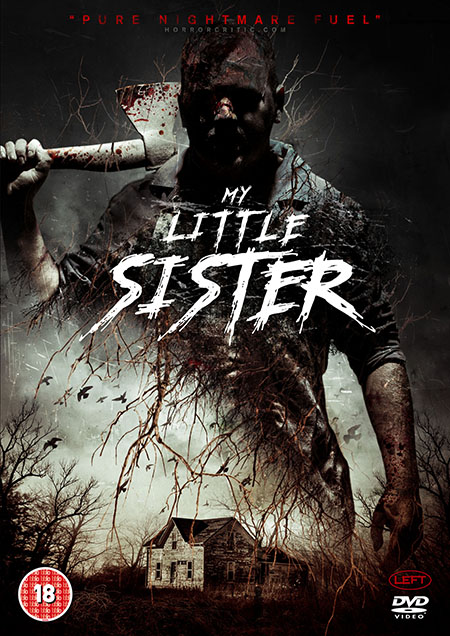 When Igor was young, he lost his father because of his little sister. He will grow up trying to find his own way of giving a new face to his past.

My Little Sister is the work of filmmakers, Maurizio and Roberto del Piccolo (The Hounds and Evil Souls) and owes perhaps more than a debt to the 80s slasher genre. In fact, if we were honest, we could say it owes regular payments – plus interest – to Steve Milner’s Friday the 13th Part 2. However, lets step back a bit.

When My Little Sister first starts up, we are introduced to a masked man torturing and skinning some rather unlucky folks. Elsewhere, a middle aged woman in a nightdress, with bandaged wrists, picks her way through a forest, smiling the smile of the drugged. How do the two disparate scenes tie into each other? Everything will be revealed, dear reader, but how you accept the conclusion will vary from viewer to viewer. After some bloodshed, we’re introduced to a pair of hapless campers Sheila (Holli Dillon) and Tom (Mattia Rosellini), who will be our protagonists for the evening. Sheila and Tom are supposed to be meeting their friends for a weekend in the woods, but it would appear their friends have gone AWOL, leaving their camping gear behind. This is the first sign that something is amiss and you should leave immediately.

The second sign is if a mysterious man wielding an axe pops up to tell you that ‘you’re doomed!’ And, oh look, here comes a woodsman to tell the couple that very same thing. Failing to heed both rather large signs that they are in mortal danger, Tom and Sheila find themselves in a fight for their lives when the masked killer from earlier, Little Sister (Saverio Percudani), comes to take them away. I’ve complained in the past of horror films being too flabby, but that’s not the case here. My Little Sister is hits the ground running and barely touches 80 minutes. If stalk and chase film are your thing, then pull up a seat. However, if you crave something more intricate, then you are out of luck. That’s your plot. Move on. There’s nothing more to see.

Whilst brevity is its strength, it doesn’t mean My Little Sister is free of criticism. Some of the performances are stilted and undermine the tension trying to be built up. Imagine Sheriff Brody uttering a monotone ‘We’re going to need a bigger boat.’ It just doesn’t work. Elsewhere, as heavily hinted at earlier, there are numerous occasions where the del Piccolo brothers appear to be cribbing wholesale from other horror films. Very likely these are homages to their favorite films, but the effect is that you start thinking about all the other movies you could be watching.

Okay, to be fair, a madman killing tight bodied women in the woods is clichéd and has been parodied within an inch of its life. Me sitting here and saying that this slasher is reminiscent of that slasher is not because I’m trying to ruin everyone’s day. It’s just whichever why you slice it, the confrontation in My Little Sister between villain and final girl is straight up taken from the aforementioned Friday the 13th Part 2. Yes, the flayed skin of a father replaces the sweater of a mother, but you’re fooling no one. There’s even a few nods to Texas Chain Saw Massacre thrown in for good measure. Once you realize this, you can’t unrealize it and the film takes a further blow.

That said, the payoff of it all is actually quite fun, with the del Piccolo brothers dropping a massive info dump into its final few minutes that certainly change the motivations of some of the film’s characters. Does that mean that My Little Sister is worth another watch? Well, not really. Despite those last few minutes, the film doesn’t really offer much reason to do so. However, you’re likely to have a good time if you’re after something non-taxing and utterly disposable.