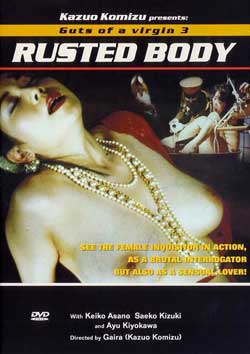 Oversexed female interrogator with a penchant for sadomasochism and torture plots a scheme with her deviant troupe to extort the considerable fortune of a city embezzler.

The Examination: Sicko exploitation film from 1987 featuring a few disgusting scenes of torture along with mondo sex. Right up your alley, you say? Careful what you wish for…

Here comes a gross shocker of a film in a series by Kazuo “Gaira” Komizu bearing a confusing lineage of titles, the previous two being Guts of a Virgin and then Guts of a Beauty. Hell, you figure it out… 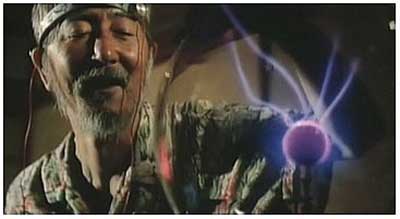 Komizu in these films is certainly obsessed with amping up softcore p*rn (at a time when such a phrase was hardly used, save for Hustler magazine in association with the term “limp d*ck”) with over-the-top freakazoid conjugation and ultimately ground-to-bits departures, otherwise relayed as “pigfeed.”

When your film opens up with girl-on-girl action taken to a level of such weirdness our coupling femmes are wont to drag their vaginas across taut lines of yarn, you know you’re going to either be titillated on the spot or you’re going to consider yourself forewarned thereafter.

Rusted Body: Guts of a Virgin 3 is a film with as much redemption as the just-wrong Ilsa series. While our flipped-out ladies (one being a sadistic interrogator named Hiriko Ichijo and leader of the “corporation”) are grinding and panting like they’re auditioning for HBO’s Real Sex, in the other room a thief with key information to millions of misappropriated yen is getting mauled by the ladies’ male cohorts, who inform the poor schmuck their brutal measures are nothing compared to what nastiness dwells in the women’s twisted minds. Proven to point, the thief is subjected to the excruciating (and graphic) loss of a toenail, teeth and further atrocity to his nether regions.

At this point, Komizu has established that Rusted Body: Guts of a Virgin 3 is going to set its course with breasts and tushies out 80% of his 68 filmed minutes—which still seems kinda long. Hiriko reveals a softer craving for sensuality which conveniently allows Rusted Body: Guts of a Virgin 3 to find many ways for her to get stripped (she is admittedly svelte and voluptuous) and laid while trying to stick to her extortion plan.

Our quartet, including a young guy with as much an addiction for sex as Hiriko, a mentally-unhinged girl serving as the clan’s willing sex toy and an old man who was a former general in the Japanese army and grandfather to said sex toy (he has no qualms about watching her get laid, revolting) kidnaps a well-established businessman who we learn has stolen most of his assets as well committing adultery behind his rich wife’s back.

If there really is any plot to Rusted Body: Guts of a Virgin 3, it comes about between Hiriko and the unscrupulous businessman, who lets the “corporation” do an unbelievably fetid form of abuse on his chained and suspended nude lover which involves eels “drunk on sake,” ugh… As the businessman is later forced to watch the young dude of the group nail his wife from behind a silhouetted screen, Hiriko ends up boinking him in the heat of the moment and finds herself instantly broken and addicted to him.

Thus serves up a cat-and-mouse game where Hiriko struggles between her insatiability and finding the strength to finish her job by coercing the bank account combination. The way this finally plays out is dreadfully painful if you’re a man and we’ll leave that to you should you feel so inclined to pursue this dreck.

There is a small bit of agreeable eroticism to Rusted Body: Guts of a Virgin 3 but mostly it’s one clumsy sex scene after another with the absolutely dumb subplot of an invention the old man creates (which is powered by a freakin’ strobe light, Jesus) in which all participants going at it within each other’s proximity will all climax together.