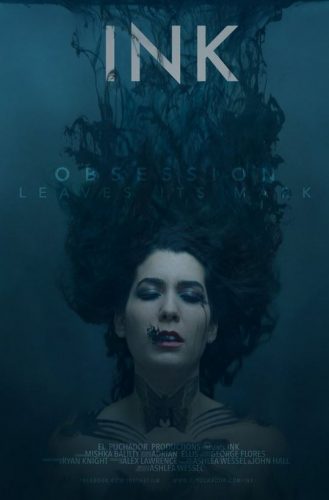 A traumatized woman seeks penance and personal transformation through tattooing after surviving a devastating pregnancy. One night, drenched in booze and ink, her deepest fears threaten to consume her.

More short films, kiddies! Today we have INK, a short from Canada written and directed by Ashlea Wessel.

I have said before how much I love these horror shorts from Canada. There is a certain sensibility that goes into these stories that I just really adore. I can’t seem to put it into words, but there is just something in the perspective and story telling that just makes me really happy.

I should mention that I watched the film before reading the descriptive blurb. As such, I didn’t quite pick up on the story point while watching it. However, after I read the description I understood better what I had seen.

The film focuses on a nameless girl (Mishka Balilty) in a bathroom. She appears to have a new and rather large tattoo on her stomach, which she reveals to us (the viewer) in due course. The girl is having a pretty bad day from the looks of things, although the reasons for that are not immediately clear.

As the film progresses, things get a bit freaky. Hard to describe exactly what’s going on but suffice it to say that if her day was bad before this moment, it’s about to get much worse.

I do want to point out the amazing visual effects work by Paige Reynolds. She has quite an extensive list of credits as a VFX artist and her experience really shows in this film.

Using my special short scale of one to five, five being awesome, I’m giving this film 4 tattoos.