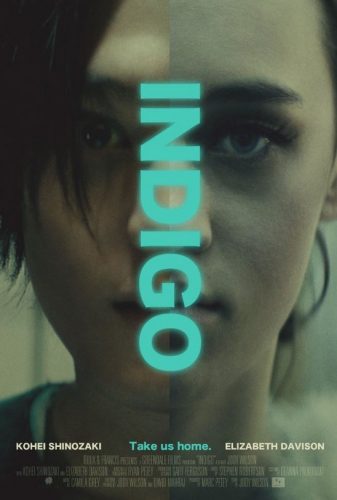 After years of waiting for a signal from home, Takumi and his toy robot companion receive a message that they will be returning to their home planet. Suddenly he’s faced with a choice to follow his cosmic destiny or pursue the love of his life here on earth

More short films, kiddies! Today we have INDIGO, a science fiction short from Canada written and directed by Jody Wilson. This is her writing and directorial debut. The film is in Japanese with English subtitles.

Yes, you read that correctly – a Canadian film in Japanese with English subtitles.

The story follows the life of Takumi (Kohei Shinozaki), who learns at a young age that he is not of this world. In fact, he is a prince from a planet just across the way that is in civil war. The royal family sent him to earth for his protection, leaving instructions with a robot companion called Doka (voiced by Rintaro Sawamoto) for when they will return to fetch him home.

Takumi’s life on Earth doesn’t work out so well. Death, addiction, bullies, and other tragedies plague his formative years. He spends much of his time with Doka as his only companion, constantly in physical and intellectual training for the time he will assume his rightful throne.

The day comes when at last he can return to his home planet, but there’s a problem. Takumi has spent his life in love (from afar) with the girl next door, Yoshimi ( played by Elizabeth Davison). In spite of all his hardships on Earth, Takumi isn’t so sure he wants to leave now. He thinks he might take her with him, if that is even possible, but that would involve telling her the truth about his lineage.

Not only is this the writing and directorial debut for Ms. Wilson, but a first film for both Ms. Davison and Mr. Shinozaki. The film is visually stunning, beautifully presented, and the cast are strong in their performances. The entire film is dream-like and surreal, yet grounded in a sort of reality that keeps the viewer invested in the characters.

This film is all my dreams come true, ok? I almost never get sci-fi films for review, much less a film that has all the awesomeness of a live action Anime straight from Japan. This film couldn’t be any cooler if it was animated by the great Hayao Miyazaki himself. Truthfully, it does feel very Studio Ghibli-ish.

Using my special short scale of one to five, five being awesome, I’m giving this film 5 robots.