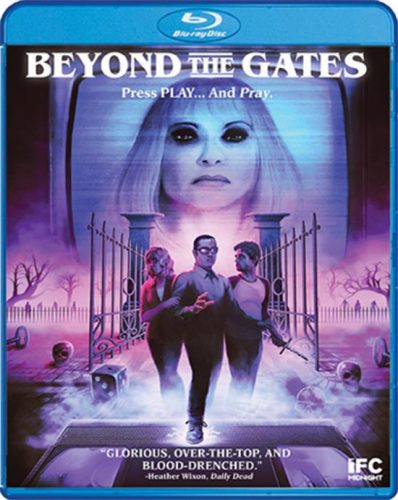 Two estranged brothers reunite at their missing father’s video store to liquidate the property and sell off his assets. As they dig through the store, they find a VCR board game dubbed ‘Beyond The Gates’ that holds a connection to their father’s disappearance and deadly consequences for anyone who plays it.

Writer director Jackson Stewart has a clear affection for the VHS store and the offbeat horror treasures they can hide. In Beyond the Gates, he’s crafted a story about brotherhood and painful entry into adulthood with the subtle story of a possessed board game as sturdy framework. While never reaching levels of sublime indulgence that much of the video nasties era brought, it’s still a worthy if not a lightweight nostalgic throwback.

In 1992 while Bill Clinton was aborting the birth of the cool on The Arsenio Hall Show, John and Gordon’s father opened a video store. In the present, their father has disappeared, and the two brothers reunite to pack up the store. One brother Gordon is a bespectacled square in khaki’s, the unflavored yogurt of the pants world. The other is John a mostly homeless slacker, with a touch of roguish charm and a dash of criminal. The idea of brothers who grow up together but grow into disparate people is an idea as old as time. Some small flourishes between the two lead actors help to raise this above CBS sitcom level of character acting. The third lead is Gordon’s girlfriend Margot, played by the wonderful genre stalwart Brea Grant.

After locating the key to their father’s office in the video store, the brothers discover a VHS board game in the VCR and take it home. One of the main drawbacks on the overall viewing quality in Beyond the Gates is the production standards, the board game looks like something teenagers would have invented after watching Donnie Darko a few too many times. It is supposed to be a very old game but seems more like Jhonen Vasquez fan art. It doesn’t ruin the movie but the feeling of this being an 80’s board game never feels truthful.

The videotape portion of the game features a sultry Barbara Crampton in black and white instructing the players on their choices. She instructs the brothers and Margot that there are 4 keys they need to recover for the game to end.

The exact rules are incredibly unclear, and saturated in nonsense. Not that you’re given time to reflect on the nature of such intricacies. The blood starts to be spilled very soon after they begin playing. It appears that all of the keys are hidden conveniently in the only other characters that have been introduced. A scummy friend of John’s and a friend of Gordon’s who is now a cop.

Building at a deliberate pace, the movie shows where it put the budget in the last twenty minutes. Here, beyond the gates, is where Jackson Stewart allows his knowledge of what makes video nasties enjoyable shine. The lighting and music are pitch perfect to the feeling he wants to invoke. Jackson strikes that balance of something new with something old with a deft visual palette. 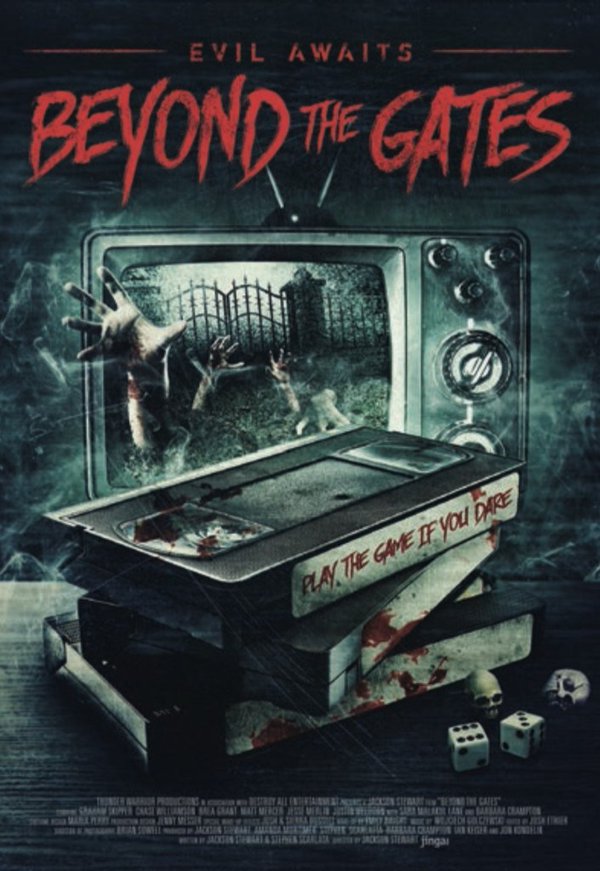 Nostalgia is the laziest art form of all; it is literally just attempting to repeat an established formula that’s proven successful. At its worse it tries to tell the viewer what it loved about something from its youth, without achieving the same emotional resonance. It’s the uninformed cameo, the remake that tries too hard to be lovable. Certainly those looking to find fault will lambast this film with similar critiques.

Nothing in Beyond the Gates revolutionizes the wheel. It’s a small, dialogue-heavy, film that relies on the investment in characters over audacious set pieces and jump scares. For that the film won’t be to every horror fans liking. Some will find the first act too methodically paced. It’s attempting to show that this is a real store, with a real sense of history on its shelves. These are brothers who haven’t been able to leave all the scars of their youth behind them. To these points the film does a wonderful job. It’s a well-made movie full of informed decisions on a small budget. On those credentials Beyond the Gates is a qualified success.

Beyond The Gates is now available on bluray per Shout Factory