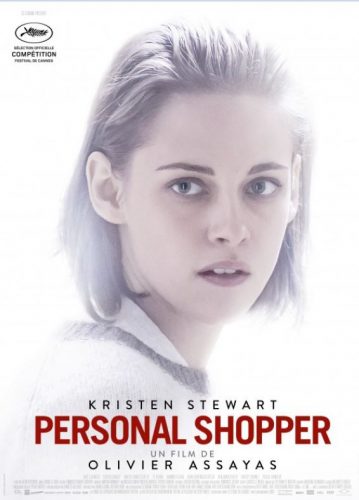 Maureen is a young American in Paris making her living as a personal shopper for a celebrity. Also, she may have the psychic ability to communicate with spirits, just like her twin brother, Lewis, who recently passed away. Maureen soon starts receiving mysterious messages coming from an unknown source.

Reviled and revered at Cannes (depending on who you ask), Personal Shopper offers one of Kristen Stewart’s best performances to date, but spins its wheels trying to force out an deliberately ambiguous tale encapsulating the themes of mourning, loneliness and sex.

Directed by Olivier Assayas (Irma Vep), Stewart plays Maureen, a personal shopper to French actress to French celebrity Kyra (Nora von Waldstatten), who leads a rather solitary existence in Paris spending her free time bewetten her bedsit and a large country house. The reason for the disparity in her dwellings is that the latter belonged to her late twin brother, Lewis, who Maureen believes she can connect to in the afterlife. This isn’t an idea she’s suddenly woken up to, but one that comes from the siblings shared belief that they’re both a little bit psychic and, should one of them die, they will send a message from the other side. Maureen also believes that she is going to die of the same heart defect as her brother and this seems to fuel her desire for connection. If you were pretty sure that you could die soon, wouldn’t you want at least an assurance from someone other worldly who could tell what to expect? Like TripAdvisor for ghosts?

This obessession – and it is an obsession – with ghosts and spirits appears to be a way in which Maureen can staunchly refuse to accept her brother’s passing. It has taken its toll on her and, as a result, she’s collection of twitches and dark ringed eyes wrapped up in an oversized jumper. It can’t be overstated what a brilliant performance this is from Stewart. Thoughts are drawn to her unique turn in the rather dull Equals; you can’t take your eyes off her. Through her, Maureen displays an attitude towards her boss to others, but cannot stand up to her when needed; a thread in the narrative sees Maureen failing to return some clothing on loan from a boutique because Kyra has decided she’ll keep it.

This has a chain reaction of her being unnecessarily abrupt to those she borrows and buys from on behalf of her employer. She’s a mess. It’s the perfect set up for a rom com in which the befuddled Katherine Heigl falls for the charms of a smooth stranger who will set her straight. And before you snort, that’s sort of what happens as, after experiencing something in her brother’s house, Maureen begins to receive texts from an unknown number. It could be her brother, but equally it could be a weird stalker. Either way, it sets a fire in Maureen.

Personal Shopper is how I imagine all adaptations of Bret Easton Ellis novels should look and feel: a slow-burning sense of all-encompassing detachment. Scenes end just when, traditionally speaking, they’re just getting started, and people drop in and out with a formal introduction from exposition or a third party. Whilst we follow Maureen constantly throughout Personal Shopper, we’re never encouraged to put ourselves in her shoes. We, the audience, merely haunt her as she goes about her days, unable to have an effect on her decisions. As a result, Personal Shopper is an engaging and delicate film, which also manages to feel bloated and un-weildly. It’s a contradiction I do not write lightly. To be upfront, there are long periods of nothing happening. Not as in moments of calm which allow the audience to breathe and contemplate what they’ve seen so far. As in nothing. And yet, these are balanced with moments of brilliance that make Personal Shopper worth sticking through.

Prime example is Maureen’s first text encounter with her brother/stalker. It’s lovely piece of directing by Assayas that makes you forget that your essentially watching a woman having a text conversation. Additionally, and despite the film’s superfluous scenes, Assayas quickly creates a sense of foreboding that stalks the narrative through to it’s ambiguous ending. It all adds up to Personal Shopper being both frustrating and fascinating; the kind of film you instantly want to recommend to others, happy in the knowledge that you’re going have a great debate as to why exactly you ‘would recommend such a film.’ It’s easy to see why it got the response it did in Cannes.