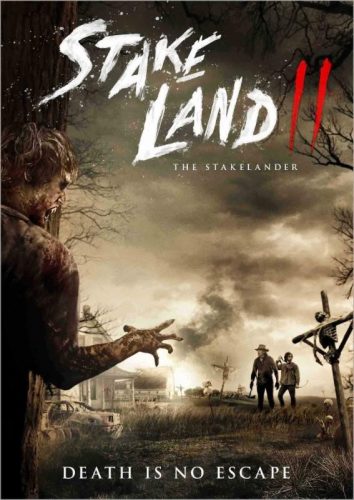 When his home of New Eden is destroyed by a revitalized Brotherhood and its new Vamp leader, Martin finds himself alone in the badlands of America with only the distant memory of his mentor and legendary vampire hunter, Mister, to guide him.

After nearly seven years of The Walking Dead’s faux-nihilism and perpetual base under siege storylines, rewatching Stake Land, directed by Jim Mickle, can feel like stepping through a portal into another dimension; one where Robert Kirkman chose to write about vampires, instead of zombies.

In the 2010 film, a young teen, Martin (Connor Paolo) is taken under the wing of Mister (Nick Damici) after his family is butchered by vampires. Turns out America has been flooded by vampirism, turning the country into a wasteland where survival of the fittest runs deep. As Mister and Martin search for a place called New Eden, they encounter numerous other stragglers whilst avoiding vampires and religious zealots, The Brotherhood. Episodic in its narrative – you can tell it started off life as a potential web series – Stake Land managed to at least build a fairly cohesive universe. Its box office may have been small, but its fan base was legit. As such, the surprise isn’t that it has a sequel, but that it’s taken so long to arrive. And has it been worth the wait?

Stake Land II: The Stake Lander catches up with Martin several years after his time with Mister. He’s settled down in New Eden with Peggy (Bonnie Dennison), the plucky woman he met in the dying embers of the first film. Now a father who recalls his time with Mister as fairytales for his daughter, Martin’s happiness is cut viciously short when, again, his family is brutally slaughtered by a reassembled Brotherhood, led by a powerful new vampire known only as the Mother (Kristina Hughes). With his world in tatters, Martin goes in search of Mister hoping that he’ll assist him on his quest for revenge. Spoilers: he finds him and the two are soon on the road again with the smell of vampire blood in their nostrils.

Despite having an obviously lower budget, Mickle no longer directing and limited to an initial premiere on the SyFy channel, Stake Land II manages to capture the bleak tone of its predecessor. This is down to not only bringing back the original cast, but also using a script from Damici, who co-wrote the first with its director. It’s these acts that ensure that the sequel never drifts too far from where it came. This film knows its roots.

Those that loved everything about the original will be enthralled by the further adventures of their favorite post-apocalyptic duo, even if neither have really changed all that much. Whilst Mister is shown to be existing as a gladiator – no, really – it’s not too long before he’s by Martin’s side, showing him a thing or two about being a big ruddy man in a man’s world. And if that’s all you want out of the franchise, good for you. Sadly, for me, Stake Land II was a rather dull affair that left us in the company of two rather dull protagonists. Yes, the Stake Land films, like The Walking Dead, focus on character before action, but a bit more than what we’re given would be appreciated.

Perhaps, dare I say it for fear of being chastised in the comments, what Stake Land II needs is a more diverse cast, outside of its manly men being manly men. (I’m reluctant to give away too much of the film for those who still want to see it, but be warned I will be going into plot specifics.) I’ve already discussed that Peggy from the first returns. However, if my plot description hasn’t made it abundantly clear, the practical and capable cocksure woman of the first film is replaced by a preening housewife who is immediately offed by the Mother. Mister and Martin do have a female partner in the form of a feral girl, whose very existence is centered around Mister. At first, there’s the idea that Stake Land II is going to go down the route of Pygmalion, but nothing ever comes of it. She just grunts and points, points and grunts, looking up at Mister with big cartoon fawn eyes.  And whilst she may be the antagonist, the beatings The Mother receives from our heroes is barbaric compared to the fate of bad guy, Jedidiah, in the previous film. I’m not suggesting that Stake Land II, as a film, hates women, but it does seem to think they’re rather icky.

Managing to be both dull and vicious, it would take a lot to make me return to the Stake Land for a third chapter.