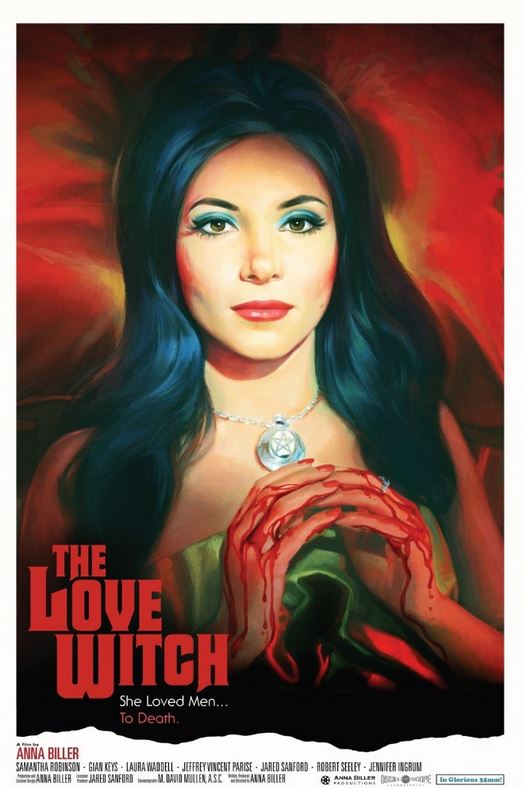 Elaine, a beautiful young witch, is determined to find a man to love her. In her gothic Victorian apartment she makes spells and potions, and then picks up men and seduces them. However, her spells work too well, and she ends up with a string of hapless victims. When she finally meets the man of her dreams, her desperation to be loved will drive her to the brink of insanity and murder. With a visual style that pays tribute to Technicolor thrillers of the 1970s, THE LOVE WITCH explores female fantasy and the repercussions of pathological narcissism.

The Love Witch is writer/director Anne  Biller’s homage to the 60’s and 70’s gothic romance films. We’re not talking Hammer or Amicus Productions, but the films born out of their successes from smaller production houses, such as Roger Vadim’s Blood and Roses (1960), or even Amando de Ossorio’s Malenka/Fangs of the Living Dead (1969). What those latter films had that Hammer and Amicus lacked is a sense of intentional awkwardness, a kind of self-conscious desire to hold camera shots extra-long for benefit of the melodrama, and at the expense of believability. Luckily for the talented Biller, The Love Witch is all the better for this approach. 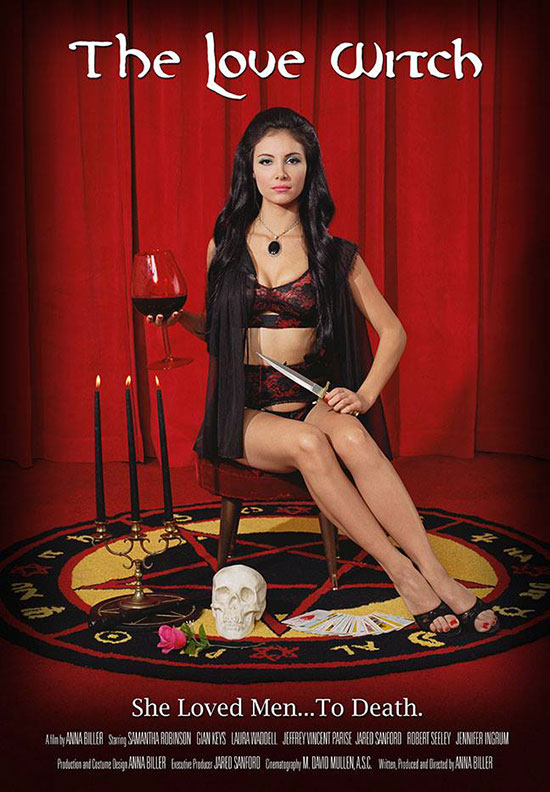 The film follows the beautiful (and expertly mod-styled) young witch named Elaine (Samantha Robinson, Doomsday Device 2017), as she magically seduces a string of men who die from their untethered emotions. Desperate for affection anyway she can get it, Elaine makes the mistake of seducing her best friend Trish’s (Laura Waddell, Crimson Peaks) husband, leading to the discovery of her murderous ways by the handsome and fairly douchie cop Griff (Gian Keys, Dark Woods 2003). The Love Witch wears its inspirations on its sleeves, and that’s a great thing for lovers of the macabre films of yesteryear. Elaine’s witchy friends, played by Jared Sanford (The Hypnotist, 2001) and Jennifer Ingrum (Bloodshed, 2005), seem pulled right out of Witchcraft ’70, so much so that you’ll be looking for Anton LaVey in the background. 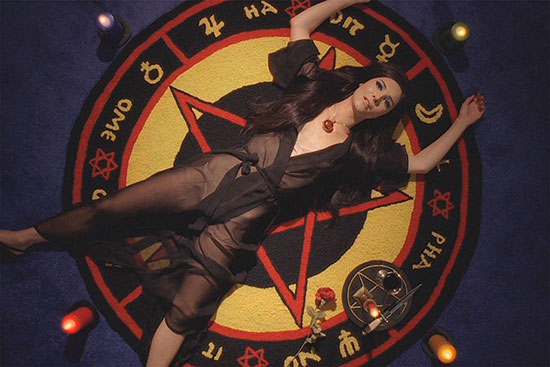 This leads to the question many will have when taking a gander at this film—is there nudity? The answer is yes, as there is full frontal male and female nudity, yet this comes mainly from the remembered witchcraft rituals (Satanism is not referenced).

The sexualized nudity comes instead from Elaine’s numerous seductions, which are filmed tastefully and with a classy level of restraint. To assume this neuters the film’s sexual appeal would be wrong, however, as this retro-themed romp has a bevy of burlesque moments that serve to emphasize the film’s theme of female sexuality as power. Of note is the burlesque performance of silver-haired Los Angeles icon April Showers, who shows us how it’s done. Touches like this, as well as Biller’s perfect choices in costume, set, makeup, and hair styling, push the film deeper into the glorious 70’s sexploitation scene than most contemporary films would even try at. 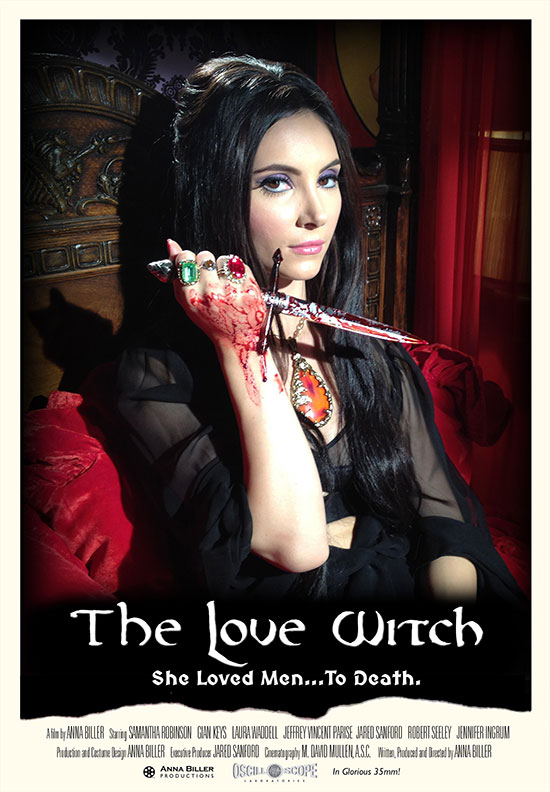 All of this leads one to assume that Biller’s The Love Witch succeeds in its attempt to recapture the gothic vibe of the 60’s and 70’s, and it certainly does. It also succeeds in being entertaining and smarter than its inspirations, yet it’s not without flaw. Samantha Robinson is fairly infallible in her unblinking caricature of narcissism, but Gian Keys’ stereotypical white-savior is actually too ham-fisted. Standouts, aside from Robinson, are on view by Waddell, who breaks down expertly during a grief-driven home invasion, and Jeffrey Vincent Parise, who plays love-stricken professor Wayne with an outpouring of manic emotion that gushes from the screen. 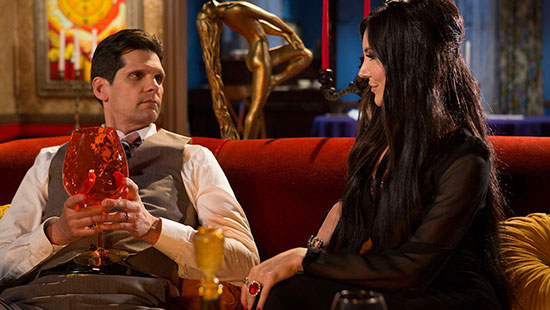 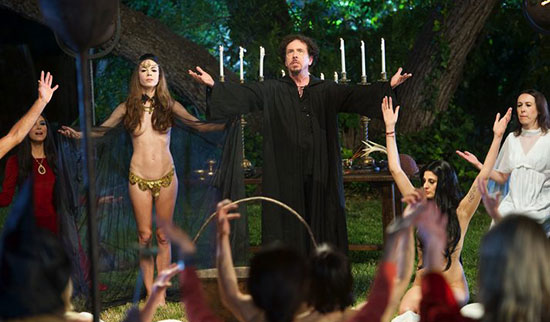 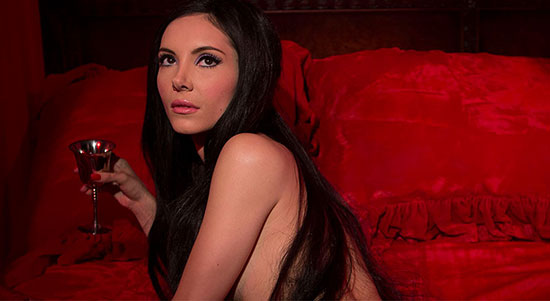 The writing is well-crafted on the whole, but does compete several times with the antiquated style of film being emulated. Some lines read modern, and their delivery equally so, which breaks the carefully constructed vibe of the movie. Perhaps the actor most guilty of engendering this is Ingrum, who plays Elaine’s witch-friend Barbara as though she’s reading lines from a prompter. Still, when not speaking, Ingrum’s off-kilter smile does well to highlight the male-female power struggle between Elaine and Sanford’s sorcerer Gahan. 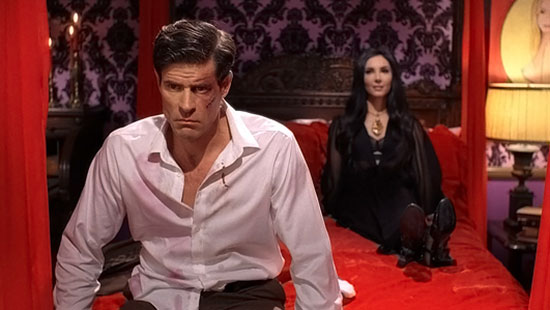 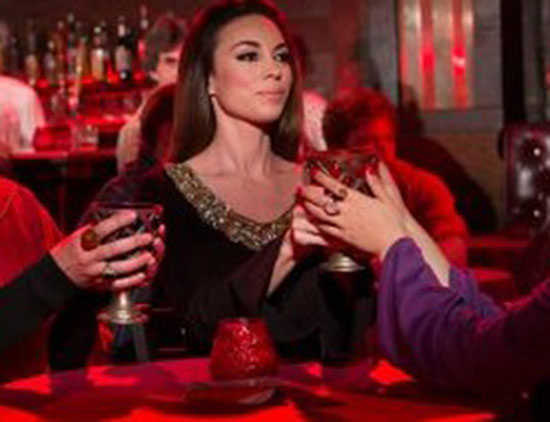 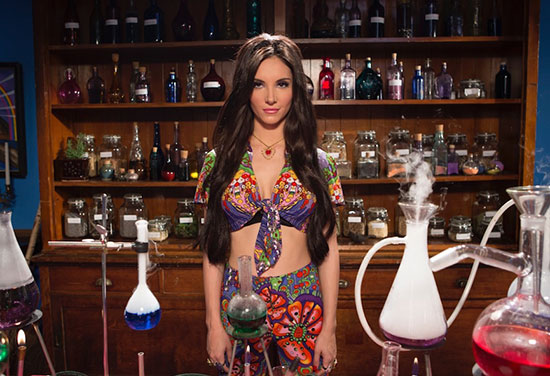 Ultimately, The Love Witch delivers on its promise of classic gothic romance to a surprising level, and manages to attain the sexploitation feel without requiring much sexual content.

Despite some minor stumbles in acting and dialogue, the vibe of the 60’s/70’s drive-in comes through powerfully, and Anne Biller continues her trend of bringing back this era of filmmaking in a way few have dared try. If The Love Witch sounds like your cup of tea, then follow it up with Biller’s sophomore feature Viva from 2007; you’re unlikely to be disappointed.