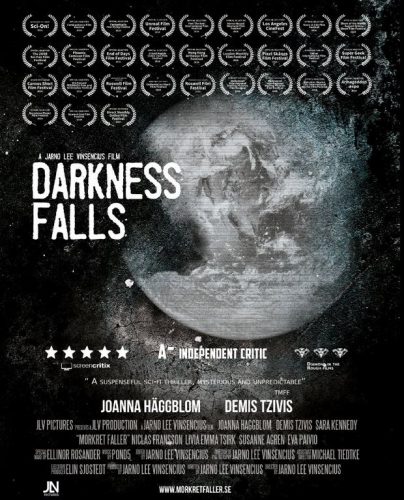 Melissa suffers from amnesia. When she slowly regains her memory, the world isn’t what it supposed to be.

Yet another short film, this time a selection from Sweden titled DARKNESS FALLS (Mörkret faller), written and directed by Jarno Lee Vinsencius. The film is in Swedish with English subtitles.

Our story opens on a young woman named Melissa (Joanna Häggblom) waking up in the middle of a snowy forest in the dead of night. She does not know her name, or how she came to be here, or even where “here” is.

She finds her way to a hotel, where she spends the next two weeks experiencing nightmares. Medical therapy to restore her memory doesn’t seem to be helping, so she simply goes about her life as best she can.

Soon enough, she is contacted by a man named David (Demis Tzivis) who tells her that she is in danger and asks to meet with her. She does, and boy does he have a story to tell her.

I don’t want to ruin anything so there’s not much else I can say concerning the plot. I will tell you that this is a science fiction film, and in fact it won Best Sci-Fi Short at Outlantacon Film Festival 2016. I am a huge fan of sci-fi, and this is a good story told very well in a very short time.

The cinematography is simply stunning. Sweden has beautiful vistas and mountains and countrysides, all of which are used to great advantage and shot with amazing skill. An interesting bit of trivia – the film was shot in only three days with a crew of two, including the director. The results are damn incredible.

So using my special short scale of one to five, five being awesome, I’m giving this film a 5.