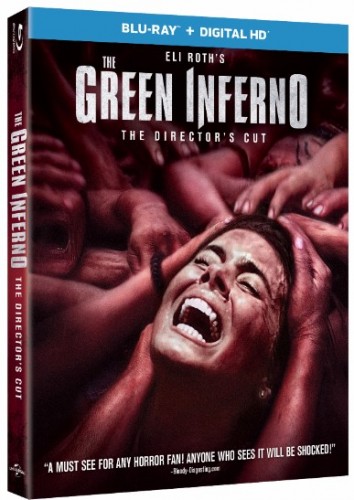 A group of student activists travels to the Amazon to save the rain forest and soon discover that they are not alone, and that no good deed goes unpunished.

Eli Roth hasn’t directed a full length feature since Hostel: Pt. 2 (2007), and his latest directorial effort, The Green Inferno, has been stuck in distribution hell for over a year. Understandably, there has been a lot of discussion in the horror world regarding it, and what were the reasons for its delay? But here we are in late September, 2015 and the dreaded Blumhouse films (Actually a subdivision of Blumhouse called Tilt) has picked it up for distribution. So the world finally gets to see Eli’s tribute to cannibal films, but is it going to satiate us, or just leave us hungry for a better movie?

Justine (Lorenza Izzo), a young and impressionable college student, finds herself participating in a activism project where the group she’s hooked up with chain themselves to trees in the Amazon Rain forest to protect the indigenous tribe that lives there. The particular section of forest that they go to is in danger of being destroyed by loggers who have no interest in the tribe that lives there. She finds herself attracted to the groups leader, Alejandro (Ariel Levy), and despite the protestations of her father – she gets on a small plane with Alejandro’s group of activists. Amazingly, the protest works, and the loggers back off from their project. After some celebrating, the group heads back to the plane where Justine finds out the truth about what Alejandro was really after. But she has very little time to fret over the fact that she’d been set up because the plane experiences a mechanical failure and crashes somewhere in the forest. Most, but not all, of the passengers on the plane die, but not Justine, Lorenzo and a few others. But it’s after the crash that their troubles really begin, when they’re beset by the very same tribe they were there to protect. To make matters even more worse, the people of the tribe are cannibals, and their next dinner has crash landed right in their backyard. The survivors are taken upstream to the tribes village – and then it gets very, very ugly. 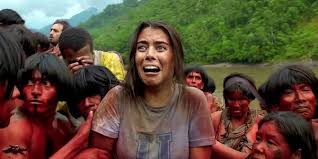 For those of you who didn’t know, The Green Inferno is Roth’s homage to the classic cannibal films of the 70’s & 80’s. Movies like Cannibal Holocaust (1980), Cannibal Ferox (1981) & Emmanuel and the Last Cannibals aka Trap Them and Kill Them (1977). And we quickly find out that Roth has indeed done his homework, because the scene featuring the first of the activists to be slaughtered and eaten is among the bloodiest and flat out disturbing scenes of the year. It’s even more off putting because this character, Jonah (Aaron Burns) is arguably the most likable character in the film. Aaron is butchered right in front of his friends (who are locked in a cage made of strong tree branches), and their panic when they realize that they’re next on the menu is palpable and terrifying. 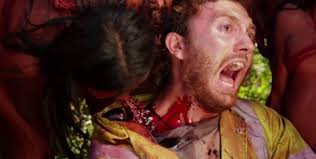 But the film doesn’t get to splashing blood and guts across the screen until nearly 45 minutes have passed by, and that’s a major flaw. That’s a long slog to get through in order to get to the actual horror in the film, and it does begin to get a bit on the slow side after awhile. It’s not a deal breaker, but it’s close. But once Roth starts ladling the gore and grue over nearly everyone in the cast, the pace of the film picks up quite a bit. The characterizations are fairly standard, but the entire cast do a commendable job with what they’re given. The script (by Roth & Guillermo Amodeo) doesn’t tread any new ground, but if you’re unfamiliar with the cannibal sub genre, it’ll all be new to you. The cinematography (by Antonio Quercia) is outstanding, making the lush Amazon forest look like the most inviting place on earth (for awhile anyways). 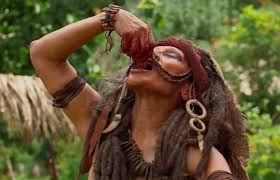 What keeps the film from achieving greatness is its slow first half, which would be forgivable if the second half maintained its amazingly graphic beginning. More than anything else, I think the biggest problem is that the film doesn’t deliver enough carnage to make up for its meandering first half. I’m not sure if anything was left on the floor of the editing room (though I’m pretty sure there’s something there), but I guess if there is, it’ll be featured on the bluray release. Additionally, there’s a stinger waiting for you after a few minutes of the end credits which has to be one of the stupidest stingers ever. It might be promising a sequel, it might just be something Roth tossed in to make his audience say “Whoa“. Either way, it’s unnecessary and dumb. 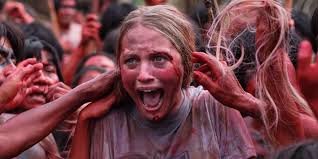 The Green Inferno is entertaining. Eli Roth hasn’t directed a film in about 8 years, and here he shows that he can still deliver the goods for the most part. Interestingly enough, Roth has another film being released this year called Knock Knock, so after that long hiatus he’ll have two films released this year. If you’re a fan of cannibal films, you’ll feel right at home here inside Roth’s emerald inferno. If you’re not, then you will be revolted by some of the carnage on display for sure. Either way, The Green Inferno is a decent tribute to the cannibal films of the 80’s, and a good way for Roth to reintroduce himself to the horror community.

The Green Inferno is now available on bluray per Universal