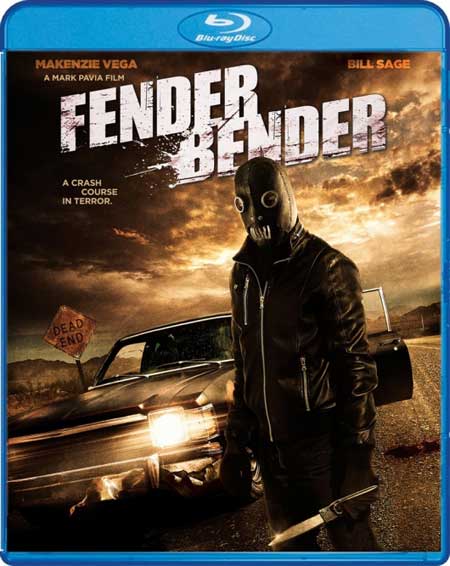 In a small New Mexico town, a 17-year-old high school girl who just got her driver’s license gets into her first fender bender, innocently exchanging her personal information with an apologetic stranger. Later that stormy night, she is joined in her desolate suburban home by a couple of her school friends who try their best to make a night out of it, only to be visited by the stranger she so willingly handed all of her information to — a terrifying and bizarre serial killer who stalks the country’s endless miles of roads and streets with his old rusty car, hungrily searching for his next unsuspecting victim.

Fender Bender, written and directed by Mark Pavia (The Night Flier), is the first feature to be produced by ChillerTV and Shout! Factory. When you have that kind of caliber behind a project, you would be right in expecting something that ticks all the right horror boxes. Well, in some ways, your wish has been granted.

Hilary (Makenzie Vega) is just your average teenager, living life and getting into car accidents with other people. Well, to be fair, it’s not her fault as she was the one that was rear-ended. Lucky for her, the driver of the other car (Bill Sage) sis fairly cooperative and after passing on her personal details, she looks forward to getting the car repaired. Unluckily, her parents aren’t too happy about the family car getting a dent in it and so they decide to go on holiday without her. Because… parenting?

What’s really unlucky though is that the Driver that hit her also happens to be a serial killer who deliberately causes accidents in order to get the home addresses of his would be victims. So, really what’s happened here is that mum and dad have learnt a valuable life lesson about leaving your underage daughter on her own! Leave them to fend for themselves and there’s a good chance someone is going to break in and try and kill her. Thanks Obama!

Fender Bender wears its 80s influences on its sleeve. Everything form the music to the lighting to the large bouts of weird logic where people do what they shouldn’t do when in great danger, they all reflect a time when women wore tight sweaters and killers had gimmicks. (You just don’t get enough gimmicks with serial killers nowadays.) If you’re looking for something to fill that gap now that you’ve watched you Freddy and Jason DVDs till they’ve broken, then Fender Bender may be able to give you a little something something. Watch it with a few like minded friends and you’ll probably make an evening of it. Just remember, the first person to start reciting the horror movie rules monologue from Scream is the first one out of the door. I’m looking at you Nigel, you always do that. Find some more up to date cultural references.

Unfortunately, for all its nods to nostalgia, Fender Bender is a rather tired affair that doesn’t do anything new. Yes, yes, I praised it for its attention to detail and now I’m riding it for that very same thing. However, the point remains. Something like Ti West’s House of the Devil hits that sweet spot between mimicry and feeling fresh. As too does something a little bit more lowbrow like Astron 6’s The Editor. However, what we have here is a slasher movie with very little slashing and very little moving. In a 90-minute film, you want the first 30 mins to be about the characters, the second 30 should give us some danger and perhaps a couple of kills before the final 30 takes us home with the virgin vs. killer showdown. Fender Bender spends too long setting up Hillary as our virtuous heroine. Nearly 40 minutes in fact. And then her friends turn up, and we get to know them. Then before you know it, we’ve got 20 minutes left and the film has only just picked up speed. There is a large difference between setting the pace and being lapped.

Look, there’s some great ideas here, but none of them really pay off. Well, with the exception of cheeky little scene that explains why our antagonist pays for all his petrol in small change. That scene got a little cheer out of me. After that, it’s just the same old same old. The kind of horror people wouldn’t remember today had it actually been made in the 80s.