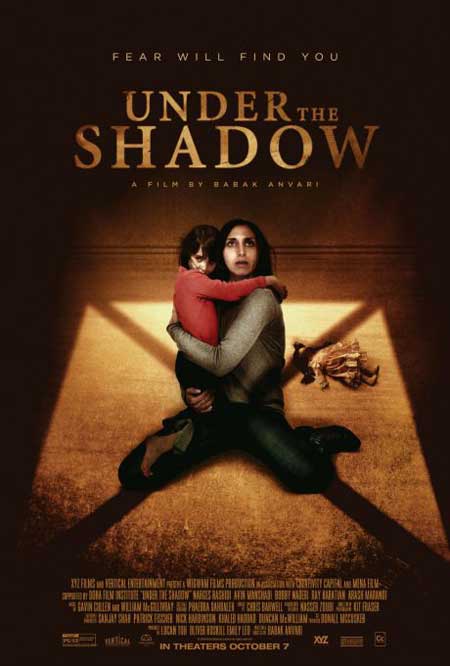 As a mother and daughter struggle to cope with the terrors of the post-revolution, war-torn Tehran of the 1980s, a mysterious evil begins to haunt their home.

Every year 1000’s of films litter the genre each hoping to be the one that sticks. We even see familiar themes and subject matters rehashed over and over again in hopes of this very goal. Though only a few rise out the ashes. The film “Under the Shadow (2016)” is one such release that actually delivers on a theme that we’ve experienced in one film or the other, the subject of the Djinn. Now of course the mere mention of the Djinn brings to mind the imagery of a Wes Craven originated franchise, though in this case there are no wishes, no clever altered realities or iconic characters. “Under the Shadow” is a film that takes its roots in horror seriously by imposing the feeling of dread, unnatural entities, and the idea that something believed might actually be based on a non-fictional origin.

Though before we dig too far into the subject matter, “Under the Shadow” is a surprise entry into the horror realm that originates from Persian culture. Directed by Babak Anvari and created under the production team of Wigwam Films, Under the Shadows is an unlikely hit. Centered into the city of Tehran around the time of the War of the Cities, we find ourselves taken back to year 1980 where we are told about the Iraq war and the Iranian revolution. The setting is near war-end where bombings were still being launched on the local cities. As the threat increased and bombs were landing ever close residents were beginning to abandon their homes in fear of their lives. This is the time of this particular story.

Shideh (Nargues Rashidi) is a medical student on the verge of finishing her degree. Due to her previous political activist past she is denied the opportunity to finish her studies and advised to seek out another career choice. Her husband Iraj (Bobby Naderi), a doctor himself, has been assigned duties serving the military in which he’ll be away from home for sometime. His protests against Shideh continuing her studies doesn’t help the relationship making for tense living at home. As she cares for their daughter Dorsa (Avin Manshadi) in his absence, it becomes clear that something diabolical is beginning to enter their lives.

The slow beginning to Under the Shadow changes pace after the arrival of an unnatural entity. Shideh being a modern woman who even mocks the traditions of their cultures view towards women and their need to cover up when in public, doesn’t take too well to folklore and urban legends. So when the idea that Djinn’s are in their midst is “suggested”, she has a hard time grasping the inclusion of a fictional entity now haunting her and her daughter. 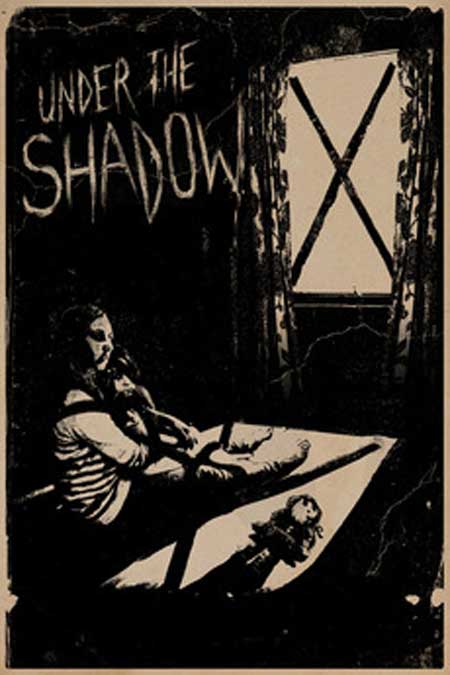 It begins with Dorsa losing her favorite doll and then escalating at every step as terror is introduced into their lives. The world around them is crumbling with neighbors leaving in droves. This sets the tone for an extreme sense of isolation, abandonment, and the coping of threats far worse than the bombs landing just outside her window. It’s a mix of situational terror and anxiety that combines nicely under the stress of the current landscape. Actress Narges Rashidi brings a believable strong performance that surely will earn her new respect in the horror genre. The subject of Djinn’s is properly presented making for a hauntingly fresh approach that delves into both the horrific and fantastical.

If your fan of ghost stories or unearthly entities, then this film will definitely hit the mark.

“Under the Shadow” is an intensely frightful film bringing out the best in Persian horror. Refreshingly “Under the Shadow” captures the essence of fear and dread under the veil of an already chaotic surrounding. Viewers who like their frights in the vein of Babadook will love this new welcome entry into 2016’s best horror films.

While we expect a large percentage of horror films to fall flat on worthy-mentioned experiences, “Under the Shadow” isn’t one of them. Seek it out and give it viewing.