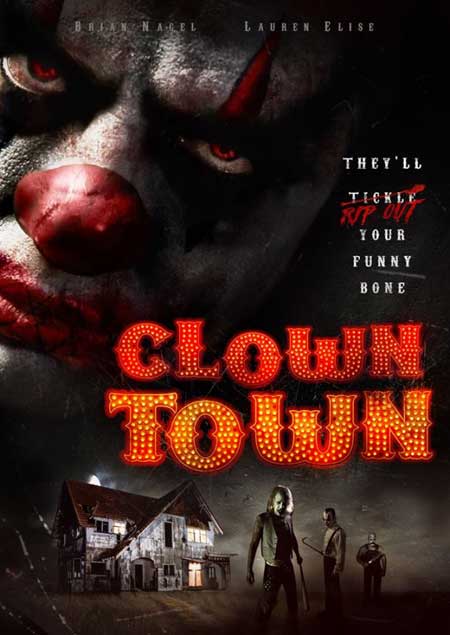 A gang of demented killers dressed like clowns terrorize a group of friends stranded in a small town.

I have always been scared of clowns and even before I saw movies such as Killer Klowns from Outer Space, It, and Clownhouse I was absolutely terrified of them. I just always thought that there was something incredibly creepy about them and while most of the other kids at my school while I was growing up didn’t have a problem with them I was completely freaked out by them. In the last fifteen years or so the rest of the world suddenly realized what I’ve always known and a slew of killer clown movies have been made as a result to cash in on viewers’ coulrophobia. Some are very good, some are just plain lousy, and some fall somewhere in the middle.  Clown Town is a perfect example of the latter as it isn’t horrible but it isn’t the best clown-related horror film of all time by any stretch of the imagination.  While it suffers from a lack of originality and tends to drag on at times I still enjoyed it for what it was and thought that it was decent despite some of the issues that it had that kept it from being as good as it could have been. Still, you could do a whole lot worse when it comes to films about people dressed like clowns running around killing people (cough, cough, S.I.C.K. Serial Insane Clown Killer, I’m definitely looking your way here).

Without a doubt the clowns themselves are the main reason to watch the movie. I thought that they were genuinely creepy and to be honest I think I liked them more than I did the main characters that we were supposed to be rooting for. I liked the fact that they weren’t overly goofy and weren’t running around wearing big red noses, big floppy shoes and silly wigs. For the most part they are just crazy people wearing grease paint and somewhat regular outfits and I thought that this was a nice touch. I was extremely glad that most of them didn’t talk (with the exception of the female clown and she didn’t go overboard with one liners or annoying comments thankfully) as I thought this made them a little more creepy because we don’t really know a whole lot about them (which is why I have always thought that clowns were scary in the first place).

While I liked the big bald clown a lot and thought that he was pretty hardcore my personal favorite was the skinny one that reminded me of a combination of Iggy Pop and Bill Moseley. He was definitely the most warped and creepiest of all the clowns that appeared in the film and I thought that he was just intimidating as hell in general.  There is just something unsettling about him in general and I thought that he pretty much stole the show for the most part as a result. I dug all of the clowns and thought that they were all cool in their own unique way, but without a doubt the Iggy Pop/Bill Moseley one was the best out of all of them.

I also liked the opening scene (even though it appears that I am in the minority judging by how other online reviewers felt about it). I thought that it had a classic slasher flick opening scene feel to it and I loved all the nods the filmmakers made to Halloween during it (though I will admit that having the family’s last name be “Strode” was a bit much). I thought the opening was cool and helped set the stage for things to come (plus it set up the twist that took place toward the end as well). It is just a fun opening scene if you ask me and I really think that some people will dig it as much as I did as long as you don’t over think it or take it too seriously.  I mean come on folks, who doesn’t enjoy a good opening flashback scene? I know that I sure do and the obvious nods to Halloween just made it that much better if you ask me.

On the flip side the film does have its share of flaws, with the biggest one being its pacing. After the opening scene it takes forever for anything to happen and we get a lot of scenes that just have the main characters sitting around talking about things that aren’t really that interesting. I got bored several times as I was watching it and I think that it would have definitely been a better movie if things started happening a lot sooner than they did. With that being said even when the clowns finally do appear and people start dying things don’t really pick up that much sadly and there is a lot of down time between death scenes that have our heroes just running around trying to figure out how to escape the situation that they are in and none of these bits are really that exciting. Things moved way too slow for my liking and I wish that there had been a little more action thrown in to help pick things up and make the movie a little more interesting in general.  The pace just seemed a little off to me and hurt the film as a whole in my opinion.

I also wasn’t real big on any of the main characters either. I thought that they were a little interchangeable and none of them really stood out or came off as that realistic to me. As I said earlier I thought that the clowns were a lot more interesting and that isn’t necessarily a good thing since we’re supposed to be booing them and cheering on the protagonists. I will say though that I don’t think that the acting was nearly as bad as some people said it was. None of the people who appeared in the film are going to win an Oscar for their acting ability anytime soon but I have seen far worse in other movies and didn’t have a problem with it. I think that the main problem was the fact that most of the characters just weren’t anything special and the actors portraying them didn’t really get a feel for them as such so it makes them look like bad actors in some viewers’ eyes. I don’t blame the actors though as I think that they did the best they could with what they had to work with. 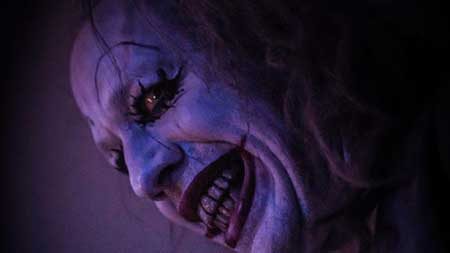 I thought that Clown Town was just okay. I didn’t hate it but I don’t know if I would want to sit through it again anytime soon. I enjoyed it for what it was and even though it isn’t very original and follows the same cookie cutter formula as a ton of other horror films I thought that it was at least watchable (though I hate the fact that we don’t get a very big body count and most of the death scenes left a lot to be desired). If you are into killer clown movies you’ll probably like it but at the same time you’ll probably forget all about it in a week’s time or so. Check it out when it hits DVD and VOD on October 4th if it sounds like something that might appeal to you as it is definitely worth a look if nothing else (though I just don’t think that it will be for everyone).