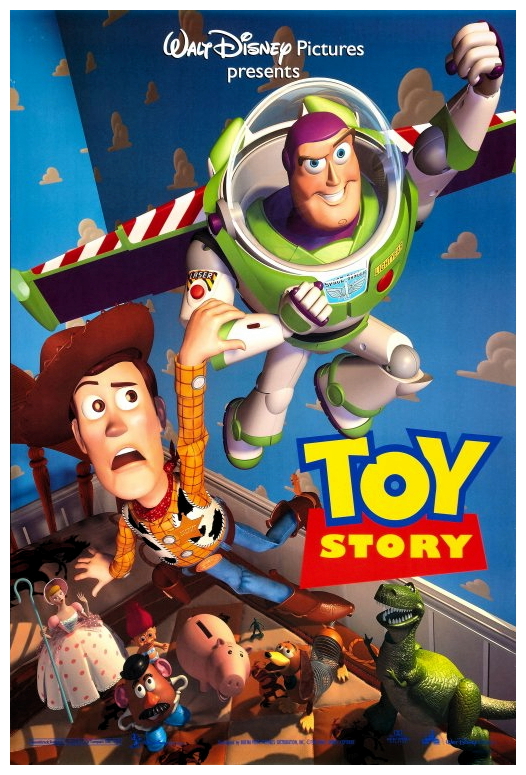 “Groundbreaking state-of-the-art moviemaking meets a delightful all-ages story in this instant classic from Disney. Whenever humans aren’t around, the toys in Andy’s room spring to life. A birthday present of spaceman Buzz Lightyear creates more than a few problems for cowboy Woody who, up to that point, was king of the toy box.”

The first entirely computer animated feature Toy Story (1995) was achieved through the painstaking consolidation of a number of moviemaking breakthroughs. The pivotal overseer of the world’s first ‘digital cartoon’ was John Lasseter. The second student to be accepted into a startup animation course at CalArts, Lasseter first joined the Walt Disney Studios upon graduation in 1979 whereupon he plied his trade on traditional animation such as The Fox And The Hound (1981) and Mickey’s Christmas Carol (1983). However, it was Disney’s startling computer animated hybrid Tron (1982) that was to have a profound impact on Lasseter, but not because of its lightweight theme of determination set in a virtual world: “It wasn’t what I was seeing, it was the potential I saw in computer animation.” The year Lasseter began his stint at Disney coincided with the genesis of Pixar, initially formed by George Lucas as the computer division of Lucasfilm with the purpose of developing state-of-the-art computer technology for the film industry. 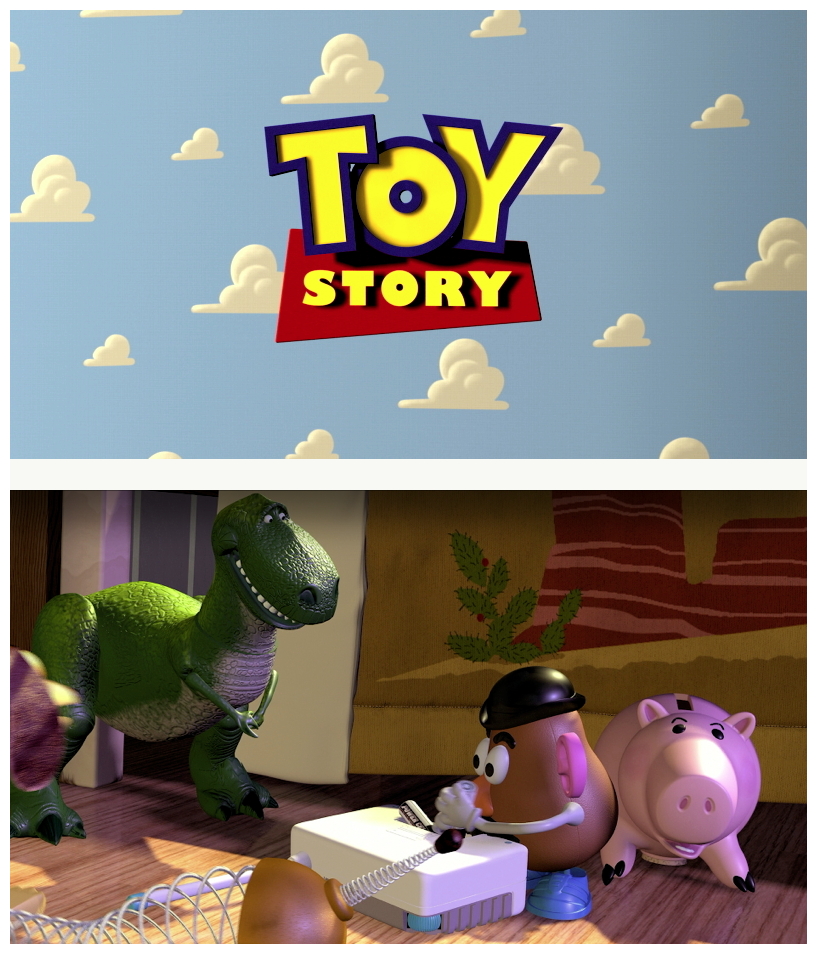 Led by Doctor Ed Catmull, former director of the Computer Graphics Laboratory at the New York Institute Of Technology, the innovative team soon needed an animation expert to add a creative spark to their technological developments. Lasseter joined Pixar in 1984 to fulfil this brief, taking on the bizarrely nebulous title of ‘Graphic Interface Designer’. Though for Lasseter, the objectives were never in question: “The goal of this group was to do an animated feature since the day I started.” The Adventures Of Andre & Wally B. (1984) was the first fully computer animated production by the group, with Lasseter taking on the character design and animation. Another of the breakthrough projects Lasseter worked on was a scene in Young Sherlock Holmes (1985) that featured a stained-glass knight coming to life. In 1986 Pixar would embark on a collaboration with Disney on CAPS (Computer Animated Production System), a system for painting the hand-drawn animation outlines, first tested on The Little Mermaid (1989) and used on all subsequent Disney productions. 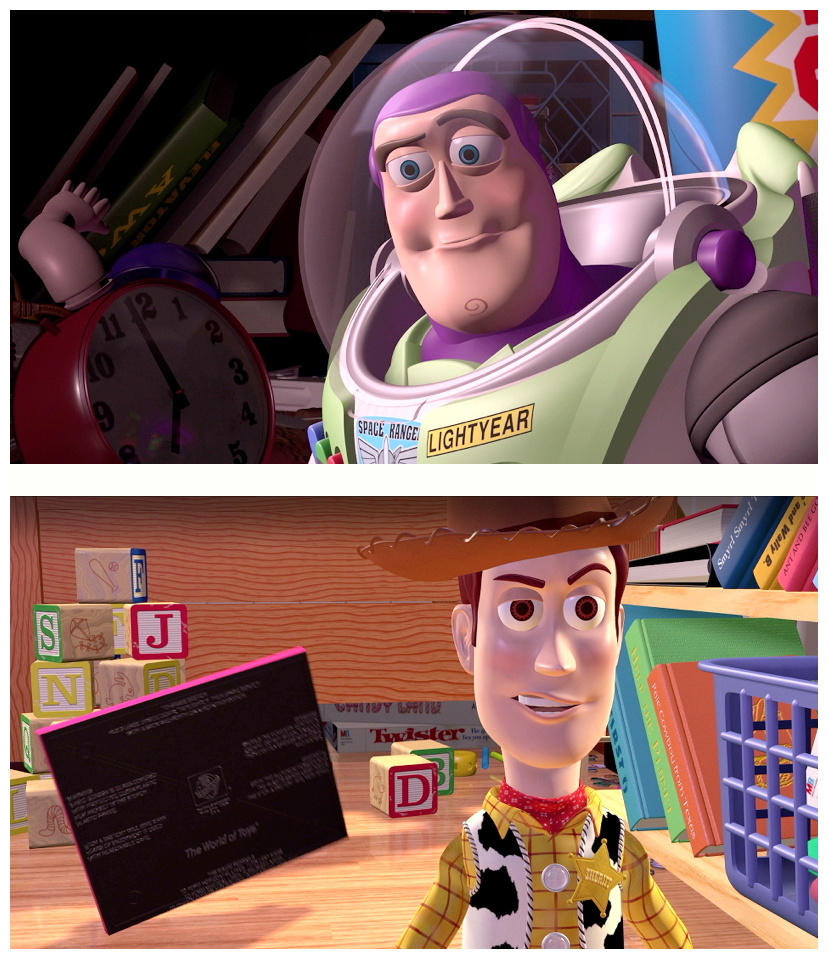 Disney was paying close attention when Lasseter made a series of four shorts at Pixar: Luxor Junior (1986), Red’s Dream (1987), Tin Toy (1988) and Knick Knack (1989). Tin Toy was the first computer animation to win the Oscar for Best Short Film and would serve as inspiration when Lasseter and team accepted an invitation to work with Disney: “The choice of toys was made because we knew it would look great in computer animation. The story would be much more believable, powerful and interesting looking than if it were done in any other medium.” However, that first pitch was far different from what would finally become Toy Story. It was first intended to be a less ambitious half-hour Christmas special, featuring Tin Toy’s lead character Tinny, searching for his toy companions. Excited by what they saw, Disney encouraged Lasseter to think big, teaming with co-writers Andrew Stanton and Peter Docter for an initial feature concept: 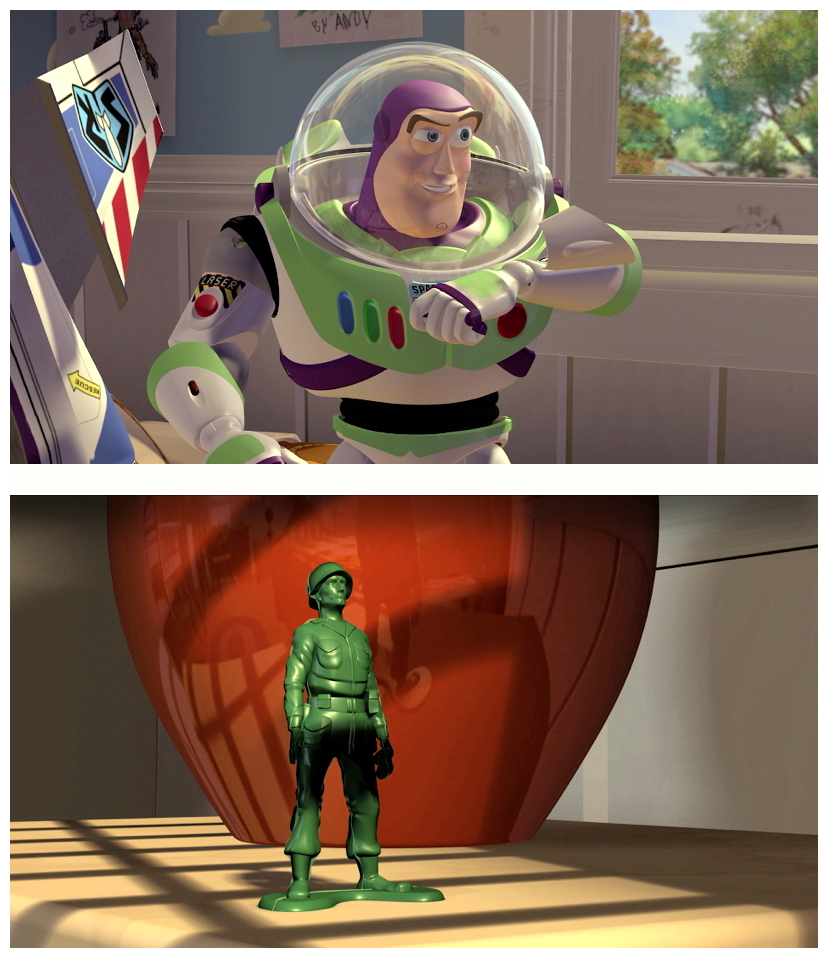 “A toy at a highway rest stop, unknowingly left behind by its owner. It’s such an emotional thing because everybody has lost a toy that they wanted so desperately to find, that they wished the toy was looking for them.” Still featuring Tinny ‘the toy with a soul’ as the main character, it would embody the theme of a road trip in which Tinny gets lost from its owner during a holiday. By September 1991 a further refinement of the draft would still feature Tinny but this time the template was finalised – it was to be a buddy movie. Jealousy inspired by the attention lavished on new toy Tinny leads to conflict with the child’s former favourite, a ventriloquist dummy and, extrapolated from this, were the final characters of Buzz Lightyear and Woody. An intensive four years of production would follow, culminating in 800,000 hours of generation time on a host of supercomputers. The resulting 77 minutes of footage consisting of 1,561 shots involving a cast of 76 characters was the first ever computer animated feature and a worldwide smash to boot. 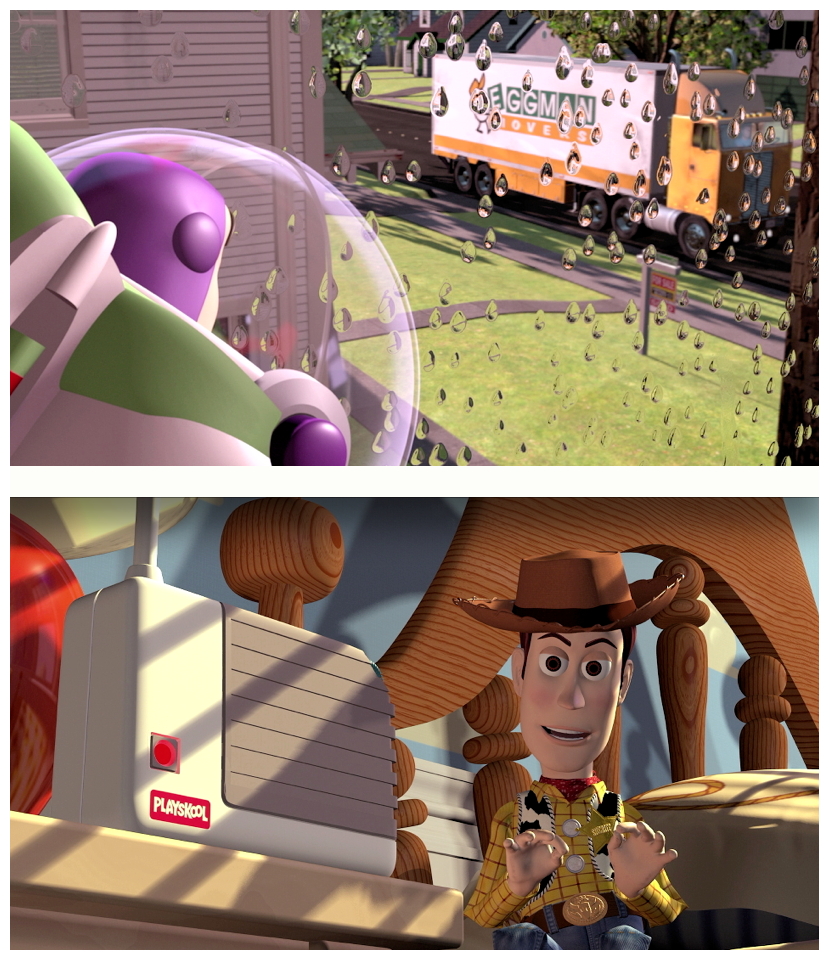 Andy Davis (John Morris) has a lot of toys. They lie around his room all day but, when Andy’s not around or asleep, they come to life. Among them are Mr Potato-Head (Don Rickles), Bo Peep (Annie Potts), Slinky Dog (Jim Varney), Rex (Wallace Shawn) and the Sergeant (R. Lee Ermey) and his platoon. Andy’s long-time favourite, a cowboy doll named Woody (Tom Hanks), is replaced in Andy’s affections by a dynamic new space ranger, Buzz Lightyear (Tim Allen). Unfortunately, Buzz is the only toy in the box that doesn’t understand that he’s just a toy. Initially, Woody wants to get rid of Buzz but, after a number of hair-raising adventures, they become allies, mainly united against Andy’s sadistic next-door neighbour Sid (Erik von Detten), an evil child who has a penchant for dismembering and blowing up toys. United in adversity, now the duo must forget their differences as they escape not only Sid, but his vicious dog Scud, and make it home before Andy’s family move to a new house. A spectacular escape plan unfolds with sequences that put many non-animated action films to shame. 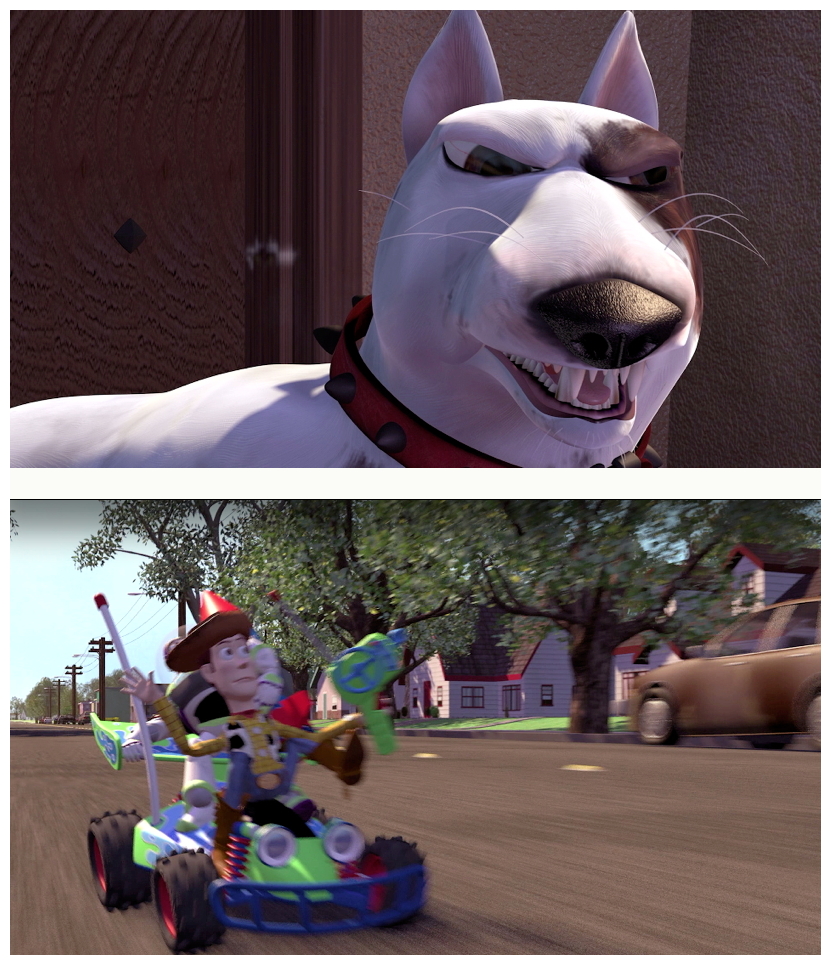 Two sequels followed, each as successful and critically acclaimed as the first, and both featuring the toys on journeys of discovery, having found themselves in tricky situations. Besides the obvious advances in animation, the Toy Story cycle was important because it heralded the beginning of a different take on children’s films, where not only were the younglings engrossed, but their parents as well, the script being peppered with subtle post-modern jokes and knowing references. The Lasseter-helmed Toy Story, A Bug’s Life (1998) and Toy Story 2 (1999) resonate with a profound anthropomorphism that dictates that there is no object that cannot become a personality but, at the very heart of Lasseter’s endeavours, the commitment to storytelling reflects the ideals of the founding father of cinematic fairytales, Walt Disney: “Tell a great story, tell it with great characters, and push the technology to better serve the story.” Right now I’ll ask you to please join me next week when I have another opportunity to make your stomach turn and your flesh crawl with another lusting, slashing, ripping flesh-hungry, blood-mad massacre from the back side of…Horror News! Toodles! 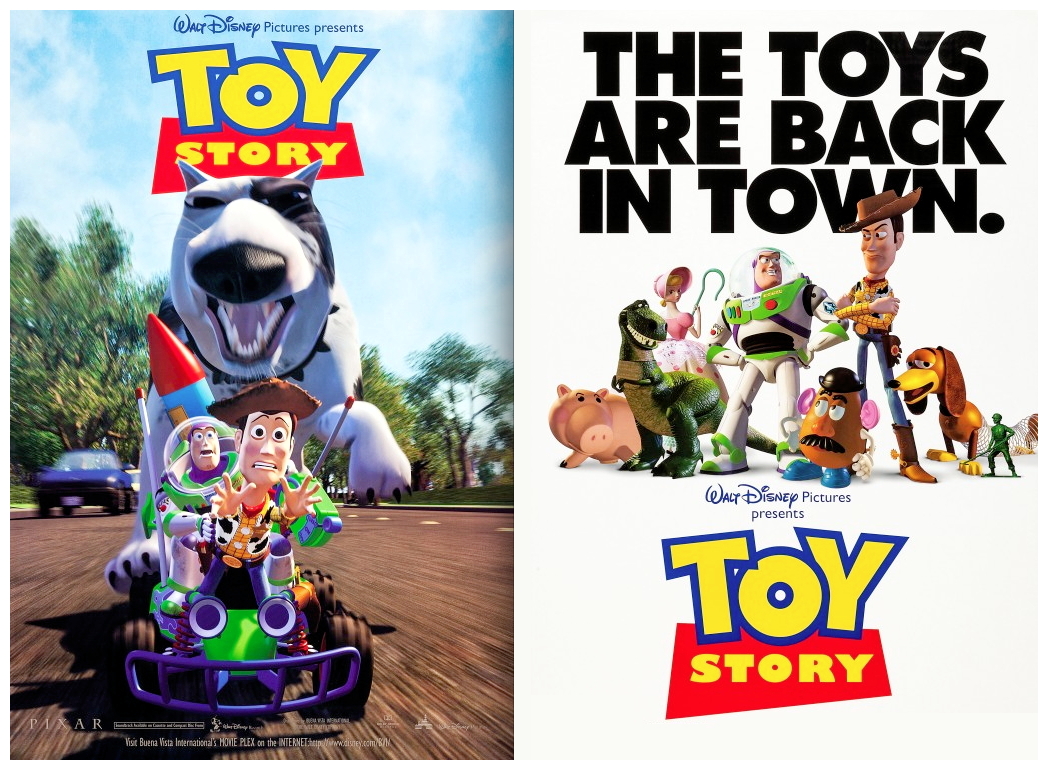