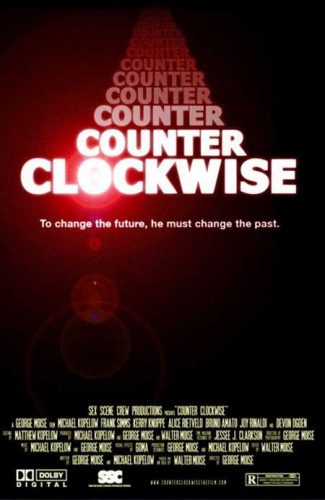 Counter Clockwise is a sci-fi thriller/dark comedy about a scientist who accidentally invents time travel and is zapped six months into the future. He finds himself in a sinister upside down world where his wife and sister are murdered and he’s the main suspect. He’s forced to go back in time to uncover the mystery surrounding their deaths.

It should probably go without saying, but on the most part you really can’t go wrong with a time travel movie. The aspect of catapulting into the future or flipping back into the past raises all sorts of possibilities and alternative universes. Director George Moïse embraces this aspect by delivering on a science fiction film that combines the genres of horror, action, crime, and dark comedic aspects with the film “Counter Clockwise“.

Now like most time travel films, it takes a while for the pieces to start bumping into each other as we navigate thru a fragmented sequence of events. “Counter Clockwise” is low production release. However, production value really isn’t the most common element used to define” if” a time movie works or not. While we know that going into the future will reveal situations that haven’t happened in the past, usually it becomes an intricate web of connecting the dots to rectify certain events by preventing them. This idea is the meat and potatoes of this film resulting in realities that can’t be fully understood till the puzzle has a chance to complete itself.

Michael Kopelow plays the character of Ethan, a smart scientist who has just cracked the formula for teleportation. When his dog (used as an experiment) disappears for several hours and returns back to the receiving teleportation pod, Ethan begins to wonder what might have caused the delay. He calls upon his assistant Finoa (Kerry Knuppe) to help unravel the mystery while carelessly attempting an experiment on himself. This sparks the story of this film that interacts situation with situation as Ethan evidently shoots back and forth thru time to piece the mystery of his sister and wife’s deaths. What transpires is a classic bait and switch story that while resolving itself in the end ultimately plays upon the viewing audience.

The acting here is kept mostly to an ensemble of characters that stay pretty consistent in being undramatic, however actor Frank Simms who pays the film’s corporate mogul Roman does light up the screen with some sharp momentary wackiness. If the film lacked an antagonist that aspect is quickly rectified with Roman’s appearance. Michael Kopelow, the lead of this film, does his best to fit the mold of the film’s nerdy intellect scientist Ethan. Story aside, his character is mostly uninteresting playing it safe by being unemotional and often detached. There isn’t much here that signifies his intellect other than the other characters “stating it” which leaves us with a lead character that should be more Jeff Goldblum-like and less “mom’s tinkering geek nerd son”. Additionally the film left out some important back story information on the competing organization.

A smart thriller, “Counter Clockwise” sympathizes with Ethan as he tries to prevent events from occurring in the future. It’s a whirlwind of science fiction craziness that provides a foundation for a much darker story to unfold. Gangsters, thugs, mentally unstable businessmen, and mystery characters all fuse this intriguingly intricate roller coaster of time and space. Viewers will find comfort in the science fiction portions over dramatic acting providing  just enough substance to make it a worthy viewing,

Counter Clockwise is simply a fun sharp-edged thriller full of classic science fiction quirks and intelligent probabilities. The movie proves that you can still provide a few thrills with nothing more than some cheap props and an inventive script.