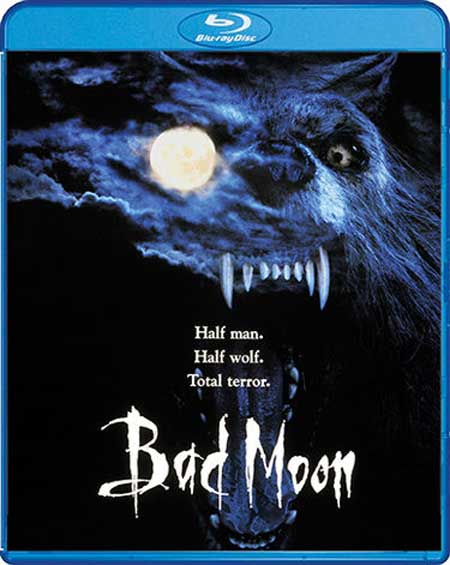 While on assignment in the jungles of Nepal, photojournalist Ted Harrison (Michael Pare) and his girlfriend are savagely attacked by a hideous beast which tears the woman to shreds and leaves Ted badly mauled. He later returns to the States to live near his sister Janet (Mariel Hemingway), nephew Brett (Mason Gamble) and their German shepherd Thor, hoping the presence of family will dispel the horrific memories… until the inevitable effects of a werewolf curse begin to surface. As his humanity begins slipping away, only the family dog begins to suspect something is wrong — but poor Thor ends up being the chief suspect in a string of recent mutilation murders.

Bad Moon is a 1996 film adaptation of the book Thor, a somewhat novel (see what I did there) take on the werewolf genre, with the story often viewed through the POV of the dog, Thor.

I will admit that the intro to Bad Moon was everything a hook should be. We saw a werewolf go to town on Ted and his girlfriend mid-coitus and it was appropriately bloody and gory and had me excited to see what was coming next. Unfortunately, the tone this intro set misguided me to what the film would eventually become; a drama with slight horror elements.

After we meet Thor, Janet and Brett (Dennis the Menace!) we learn that Janet’s brother, Ted had survived the werewolf attack and is back in the states, unsurprisingly attacking unsuspected victims in gory fashion. That is one thing I like about Bad Moon, it gets into the werewolf game straight away, instead of the typical “coming to terms with my affliction” angle most werewolf films tend to travel. Because the film is based more around Thor and the family, this is simply a given, with Ted having been a werewolf for three months before he reunites with his family with the thought that love may be the cure of his werewolfism.

And this is where the inconsistencies with the story and Ted begin.

If Ted thinks love is the cure-all, then he (nor the story) does anything to investigate this theory. Ted pretty much stays holed up in his airstream caravan when he reaches sis’ house and becomes an extremely inconsistent character. At times he’d be sympathetic and helpful, then at other moments, which were more common than not, he’d be an asshat to her, Dennis—I mean Brett, and Thor. A good example of this inconsistency: In one scene Ted looks at Thor and says “In good time, old boy… In good time” hinting that he wanted to kill or get rid of the dog, but later he pleads with Janet to not let Thor out at night, fearing he may kill the mutt once he turns. Now if they made Ted friendly at the beginning and slowly transitioned him into a more conniving character, his actions and motivations would be much more coherent and one could attribute them to Ted becoming more accustomed to his lycan DNA, but his inconsistent actions begin immediately with no rhyme or reason. Because of this, Ted becomes a watered down antagonist and the film meanders along with scenes that kind of feel repetitive as the runtime nears its inevitable end.

The lack of tension and suspense was also a big issue. You knew Janet and Dennis—sorry, Brett would survive, the history of film pretty much cements a mother and her child’s safety, so you had no concerns about them. Throw in a limited extended cast; only an officer and a dodgy sales guy with the latter for fodder and the former purely for a quick little chat, and Bad Moon struggles to elicit any kind of suspense from the viewer. A missing B-story also hampered this very straightforward, somewhat predictable, tale.

One thing I did like immensely were the practical effects. The werewolf costume looked great and the gore was rather well done. The one and only transformation scene was laughably horrendous, with bad CG morphing used to stretch Ted’s face and body around. It was such a shame considering how well (and practical) the rest of the effects were handled.

Would I watch this again? No. There isn’t enough in Bad Moon to warrant a second viewing from me. It isn’t a bad film by any means, but it doesn’t feel fully realized, nor does it do anything new nor better than a slew of other more suspenseful and horrifying werewolf options out there.

2 out of 5 salivating maws

Bad Moon – is now available on bluray per Shout Factory