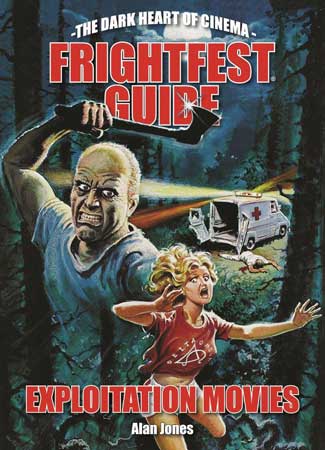 The first in a planned series of wide appeal books for both the curious spectator and the cult connoisseur, to be published annually with FrightFest, the inaugural volume is an informative celebration of the grindhouse film industry in all its diverse sex, horror and violence glory.

Comprising an in-depth A-Z of the entire celluloid sleaze underworld, the book is a fast and furious zip through a once dismissed field now beloved by everyone from Quentin Tarantino and Martin Scorsese to Peter Jackson and James Wan.

From Blaxploitation and Nunsploitation to Godsploitation and Hixploitation, acclaimed critic, broadcaster, author, and FrightFest co-director, Alan Jones takes a wildly illustrated look at 200 of the most infamous, obscure and bizarre movies ever made, blasting the electrifying truth before your traumatized eyes about the shock and schlock movies tapping into the basest of desires. Plus there is a scene-setting introduction by 42nd Street habitué and controversial director Buddy Giovinazzo.,

The official book launch is 25 to 29 August, 2016 at FrightFest, Vue Cinemas Shepherd’s Bush, London W12. The FrightFest exclusive hardcover will be on sale for just £20. The book’s international street date is Friday 16 September 2016.