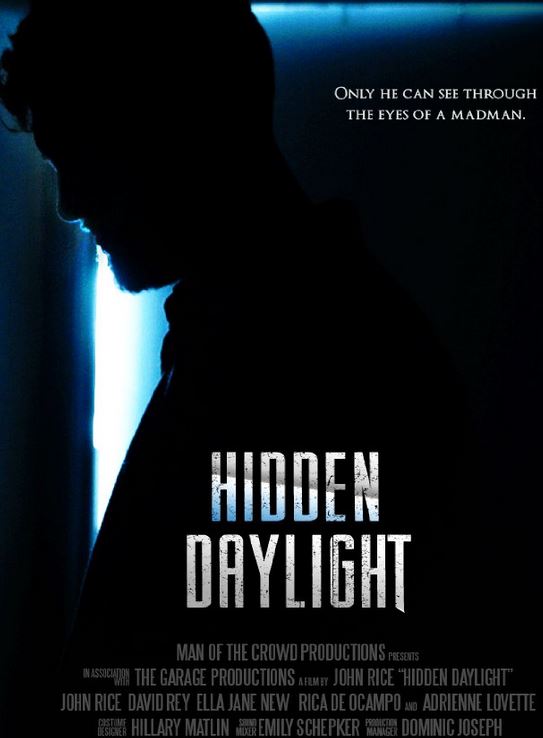 When his girlfriend is abducted by a sadistic killer, a distraught businessman seeks answers from a blind psychic who can see through the eyes of the madman.

More short films, kiddies! Today we have HIDDEN DAYLIGHT from Man in the Crowd Productions, written by John Rice and directed by Adrienne Lovette.

A desperate man (played by David Rey) is looking for his missing wifen Aurora (Ella Jane New). Aurora was abducted by a serial killer of some sort and no leads have been found to find her. The man decides to visit a blind psychic (played by writer John Rice) who is said to be able to see through the eyes of the killer.

After a shady money exchange at the door, the psychic leads the man into his parlor and the session begins. Can this blind store-front gypsy really see through the eyes of evil? Can he discover the fate of Aurora and help save her before its too late?

I really enjoyed this film. It’s dark all around – the subject matter, the minimal use of lighting – and really pulls the viewer into the moment. The performances by Mr. Rice and Mr. Rey are spot on. The tension is so thick you could cut it with a knife.

There isn’t much else I can say without spoilers, so I’m just gonna say watch this film. I think you’ll dig it.

Using my special short scale of one to five, five being awesome, I’m giving this film 4 psychics.