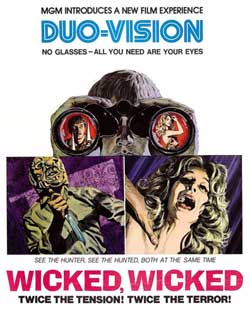 A whacko in a hokey mask goes around killing and dismembering blonde women at a hotel. Shot in “Duo-Vision.”

Wicked, Wicked is indeed a weird little movie and even though I really wanted to like it I just couldn’t for a number of reasons. I thought that it was boring, corny, and I just really couldn’t get into it for the most part. I wasn’t really a fan of the whole “Duo-Vision” thing and thought that it just didn’t work. As a matter of fact I thought that it was just more distracting than anything else and I honestly had a headache by the time I was done watching it as a result. What is “Duo-Vision”, you ask? Why it means that the entire film is shot using a split-screen ala Brian De Palma (though De Palma had enough sense to use the technique sparingly with his films). I thought that it was a bad idea and unless you just really want to watch things happening on two screens at the same time for 95 minutes or so you are going to dislike this movie as much as I did.

If you ask me if you feel to attach some sort of gimmick to your movie then chances are you have already lost the battle right out of the gate. With the exception of William Castle (who incorporated tons of gimmicks into his films during his career) no one can really quite pull off the weird gimmicky thing when it comes to movies if you ask me. Wicked, Wicked is a perfect example of this as I didn’t enjoy the whole “Duo-Vision” thing in the very least. It might have sounded quite brilliant on paper when writer/director Richard L. Bare (which is quite possibly the best P*rn name ever if you ask me) came up with the idea but I thought that it failed miserably. I had a lot of trouble paying attention as to what was happening as I had two screens full of things going on around me and I wasn’t sure which one I should really be watching for the most part. I will admit that it works just a little bit every now and then, but 99.9% of the time I just didn’t care for it and thought that it was just a cheesy gimmick put into place to distract the viewer from the fact that the movie just wasn’t that good in general. I don’t have anything against the whole split-screen thing (as it totally works in Sisters and Carrie) but it is something that definitely should be used in very small doses. 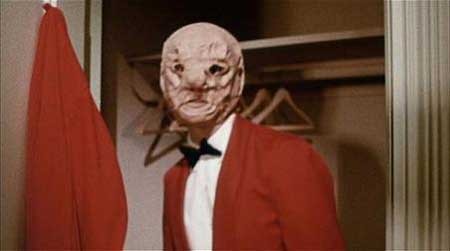 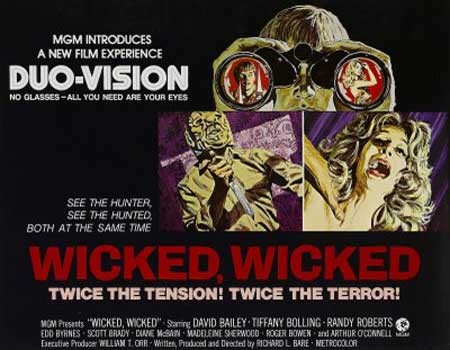 I also just really didn’t care for the premise of the movie that much either. It was pretty unoriginal and I thought that the mask that the killer wore was nothing short of laughable. It looked like something that you would pick up at the Dollar Tree around Halloween and just wasn’t scary-looking at all. To be honest I am a little surprised that some of the killer’s victims in the movie didn’t start laughing when they saw what he was wearing (especially since he just wears it with normal-looking clothes). The guy under the mask is even less intimidating and doesn’t make for a very convincing homicidal maniac. Normally I love these types of movies and I think that it is pretty hard to screw them up, but the people responsible for this film managed to do so in a lot of ways. If you’re looking for an awesome slasher flick from the early 70’s you will want to steer clear of this one as it definitely doesn’t deliver. Seriously folks, you’ll spend more time yawning and looking forward to it just being over with than you will being scared or even that interested in what is going on for most of the film’s running time.

I didn’t really like any of the characters either and as such I didn’t care if any of them lived or died (which is never a good thing if you ask me). As I said before the killer is mighty lame and just plain boring for the most part (like the rest of the film). A couple of somewhat recognizable faces show up (including Tiffany Boling and David Bailey) but for the most part the film doesn’t really boast that great of a line-up in terms of big names unless you count Edd Byrnes, who sadly doesn’t have his comb with him (how many of the younger readers will get that one?) who looks like he’d much rather be somewhere else during most of his scenes in the movie (and I’m sure he wanted to be). The acting is pretty dismal for the most part as well and to be honest I just kept wanting the killer to take out all of the characters as soon as possible so I didn’t have to see them anymore.

As you can tell I wasn’t a big fan of Wicked, Wicked. I was mildly intrigued by the whole split-screen thing at first but it gets old about five minutes into it. Really the only cool thing about the film is the fact that the film’s score is made up of the score from the silent movie version of Phantom of the Opera from the 20’s which is a neat touch but it isn’t reason enough to see this film. I thought that it was a pretty lousy flick and it is hard to believe that it came from the same guy that was somewhat of a big deal at one point in time (he worked on The Twilight Zone, Green Acres, and Lassie among other TV shows). Unless you enjoy some sort of gimmick then you are better off skipping this movie because it really isn’t anything special.