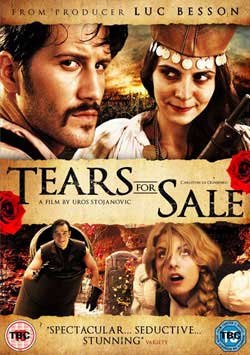 Story of two sisters that grew up in a small Serbian village in the beginning of the 1930s. The village is torn up by wars and years long blood oath. There are no men left in the village. Our heroines, Ognjenka and Mala Boginja decide to go to the city, kidnap men and return life to their village. The lights of the metropolis dazzle them and there starts this little amusing and sentimental adventure.

From Serbian director Uros Stojanovic arrives a fairytale imaginary world of rich luscious landscapes and age old beliefs. As the men of Serbia were called off to war, it left a land full of lonely women who craved the presence of a man to fornicate with and share company. The remaining men were either aged or far and few between creating a unique conflict of women who will take any man to regain some sense of past relationships or womanhood. This unique picture falls somewhere between fantasy in the vein of Terry Gilliam and a love story drama with a hint of supernatural overtones. Not clearly a one category type film, it is a lighthearted approach to a fantastical idea. Which is as simple as being a single man within a needy village of love struck women. As we dig into the story, we learn that the nearby pond was created from a widowed woman’s tears who mourned the death of her husband.

And in this tiny village, the women have stuck to traditional thoughts and cultures that still cling to the idea of magic and spiritual disciplines. Ognjenka and Little Boginja are approaching the age of 21 in which they feel as they have already begun a walk into old age. The also have yet feel a man’s touch that they refer to simply as a “caress”. When they accept the idea to approach the towns last living elderly male in an effort to experience a sense of making love, he dies in his catatonic state causing an instant retribution from the town’s women. Condemned to death, they are given a last chance to redeem themselves by seeking out a male within 3 days. The spirit of their departed grandmother is set loose as a form of collateral so that they return within the 3 days.

The journey begins and the 2 ladies soon find that they are not the only town with a lack of male subjects available. It is within this journey that they come upon 2 who young men who they instantly fall in love with. Even at the threat of a town full of needy women they manage to lure the 2 away and bring them back to the village. The story has it’s mix of odd circumstances as in a field that is full of land mines from an overanxious former resident who thought by doing so would add safety to the towns remaining few. What transpires is that he dies without marking the explosive areas thus preventing the locals from tending to the crops and source of financial income.

Often woman encounter these mines as they are selected from a drawing of straws to chance death over picking crops for the town. The whole approach is a bit surreal and comedic in the effect of rich visuals that create a lighthearted atmosphere regardless of exploding bodies. There is fine amount of sex within but not the effect of being oversexual. Rather, we share in the frustrations they endure than the rewards. What might be a rather obvious comedic element to this film is that the situation is almost a male fantasy come true as every woman in town is drawn to the aspect of a single male for a potential mate or just to have sex with. The 2 leading male characters known as the “Charleston king” and the “man of steel” find that being overly wanted can also be a problem that is tough to deal with. As the film progresses its apparent that at the core is a semi-love story mixed with a few bizarre inclinations. I can’t really say I entirely got the ending but it was fun getting there. “Tears for Sale” clearly falls into a more categorized class of film  that combines drama. fantasy, comedy and surrealism. As it states in the promotional notes, its a fairytale for adults. 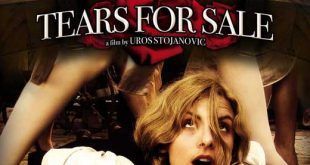 Tears for Sale: a darkly fantastical comedy about sex and war