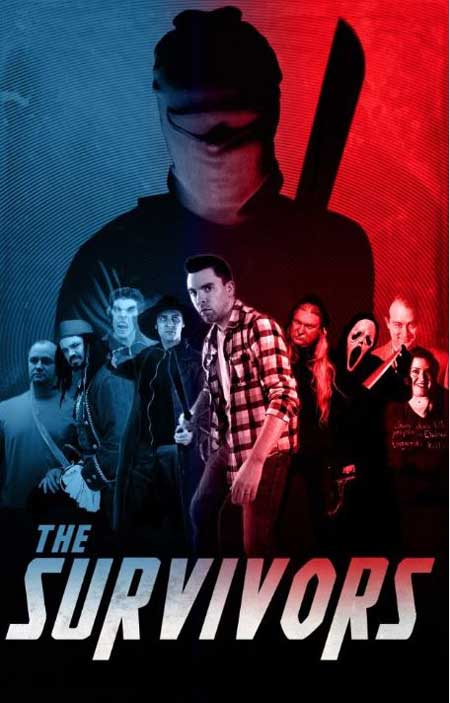 Will (Everyone Must Die) is bound for vengeance against The Killers for what they did to him. He now knows their leader is the first Slasher: Norm! But he’s also forced to deal with the new era of Slashers at the same time: Spookface, Fisherman, and Brenda. It’s time to put together a team of the world’s greatest Survivors to wipe out this threat. Will they be able to stop Slashers AND Killers?

Another short film, kiddies! Although technically a short film, it has a run time of 37 minutes so it feels like a feature. Today’s selection is THE SURVIVORS, written and directed by Steve Rudinski.

So this film is actually a sequel (of sorts) to a few of Mr. Rudinski’s other films, specifically EVERYONE MUST DIE! and CAPTAIN Z:THE TERROR OF LEVIATHON. But the references don’t stop there….

Once again, Mr. Rudinski taps the talent of his stable of fellow psychopaths to make this film. Actors from CAPTAIN Z, EVERYONE MUST DIE!, SUPER TASK FORCE ONE, SCREAM PARK, and of course WOLFSTER, PART ONE:CURSE OF THE EMO VAMP all take part in this travesty, along with some new recruits to the director’s particular flavor of crazy.

I can nit-pick over special effects, after effects, etc but I’m not gonna. This is funny. This is FUN. I would recommend seeking out EVERYONE MUST DIE! before watching this one, as the story directly follows the events of the previous film. Not really necessary, though, as they do recap the story in this film. Still, it might make it easier to get into the plot if you see that one first. And yes…there is actually a PLOT.

Our story follows Wil (Ben Dietels) as he joins the Slasher Hunters, a group of “final girls/boys” from various slasher attacks.Wil himself is a survivor of the events of EVERYONE MUST DIE!. These survivors have some sort of special genetic makeup which makes them ideal to pursue the slashers. Under the leadership of their chief (Aaron Wilkinson), they seek out the slashers wherever they may hide.

The slashers, meanwhile, have organized under the leadership of Norm (Robert Miller), the first slasher killer. Norm realized that following “the rules” of being a slasher meant he couldn’t kill as many people. Norm is retired from the game now, but he has a vast army of new generation slasher killers under his command. They move from town to town killing as many people as possible before moving on.

Wil is assigned some new team members to help in the latest assault. Captain Z (played once again by Zoltan Zilai) and The Wolfster (Steve Rudinski). Their main objective is to take out the newest slasher team – Candyman (Mike Nelsen), Fisherman (Thomas Smith), Spookface (played by three different people, for reasons), and Brenda (Aleen Isley). Not a particularly efficient team of killers, but still a problem.

Meanwhile, child killer Frank (again, Steve Rudinski), has been trapped in Hell awaiting reincarnation. But it seems the upper management of Hell (Scott Lewis) isn’t pleased with his most recent performances and aren’t willing to send him back. I geuss that’s what being fired in death is like.

Ok, that’s kind of all you need plot-wise. Let’s talk about how ludicrous this film is. I love it! it’s stupid, low budget, and some of the acting is lacking, However….

I lost count of the genre film references. So many in-jokes…so much cheese. There is also a fair amount of “we’re in a movie” jokes, which normally I won’t let anyone but Mel Brooks get away with that. Still, I really love the way Mr. Rudinski thinks. I’ve reviewed CAPTAIN Z, and I’ve sought out other of his films. It’s obvious that they’re having way too much fun. That’s what indie filmmaking is really about. If you’re not having fun, then you shouldn’t do it.

Oh and stay through the credits. There is a final scene after.

So to sum up….stupid, funny, moments of genius, totally dug it.

Using my special short scale of one to five, five being awesome, I’m giving this film 4 slashers.