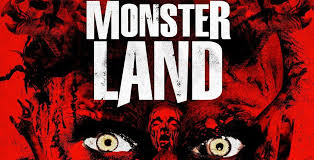 Welcome to Monsterland! A terrifying place where savage beasts, carnivorous creatures, and grotesque abominations are the new normal; and the human race is now at the bottom of the food chain.

The people that brought you last year’s Zombieworld are back with a new anthology film called Monsterland, and it’s a loosely connected series of shorts that feature a different type of monster in each one of them. The wraparound story that connects all of the shorts features a man (Josh LaCasse) running for his life in the midst of what looks to be a monster armageddon. He eventually runs into a theater (that’s full of dead people), grabs himself a bucket of popcorn, and sits down to enjoy the feature. Written/Directed by John Skipp & Andrew Kasch, it’s vaguely reminiscent of a DTV feature called Zombiethon (1986) where a young girl runs into a theater where a series of trailers featuring zombies are playing on the big screen. It’s a simple, but effective way to link all of the shorts together. As I did with Zombieworld, I’m going to list/review the shorts one at a time. 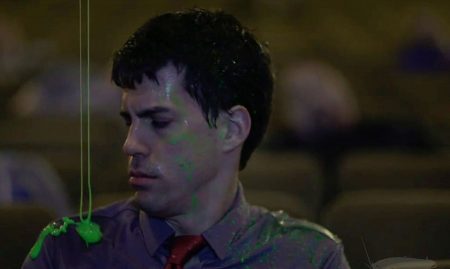 The first short is called Don’t Go Into The Lake, Written by Tyler Wood & Haley Norman. Directed by Corey Norman. A group of twenty somethings go late night skinny dipping in a lake. Unfortunately for them, there’s something very hungry waiting for them under the still water. Although I’ve seen this setup in numerous films, I was still mildly interested in this opening segment because I wanted to see what kind of monster the film makers came up with. Sadly, there’s no monster to be seen here at all, just a few sets of breasts and lots of blood in the water. It’s only a few minutes long, but without a monster to be seen, this one is a really poor way to start off a film called Monsterland, and I’m actually at a loss as to what Wood and Norman wrote because there’s no story here at all. 1 out of 5 shrouds. 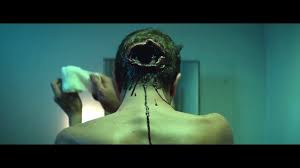 Next up is The Grey Matter. Written by Peter McCoubrey. Directed by Luke & Peter McCoubrey. Simon (Ebon Moss-Bachrach) wakes up alone in a dirty alley covered in blood. He discovers he has a massive wound on the back of his head, and doesn’t have proper medical insurance to take care of it. So he wraps his head best he can and proceeds to try to live his life, wound and all. But he hears a strange voice in his head (which belongs to a sort of worm. A worm that talks to him), and that voice, among other odd occurrences, both hinder and help him as he tries to score a date with the office babe, Emily (Lucy Walters). With snippets reminiscent of films like An American Werewolf In London (1981) and Brain Damage (1988), this is a interesting, though not particularly frightening entry. With its assured direction, believable acting, sense of humor & crisp cinematography, it feels like it’s a short that wants to be stretched out to feature length. It doesn’t answer all of the questions it posits so maybe that’s the idea behind its existence. 3 out of 5 shrouds. 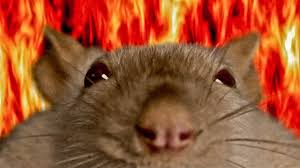 The next entry is called Curiosity Kills. Written by Kaspar Ainelo, Jan Andresson & Sander Maran. Directed by Sander Maran. This one features no dialogue (save for one word), and attempts to lighten the mood a bit. A little boy (Peeter Maran) feeds his pet rat some chemicals he pulled out of his father’s briefcase, turning the rat into a radioactive killer rat that calls itself Ratatus. This one looks a lot like an episode of Pee Wee’s Playhouse, and plays a lot like a Three Stooges short. But it isn’t very funny at all, and ends up being quite predictable. The garish colors are interesting to look at, but became an eyesore before too long. The over the top acting also failed to make me smile, and although young Peeter Maran tries very hard, he doesn’t have the chops to make his character very funny. The best bit in the whole thing is the rat announcing that he is Ratatus, accompanied by an explosion of colors/flames that caught my interest for a hot minute. 1.5 out of 5 shrouds. 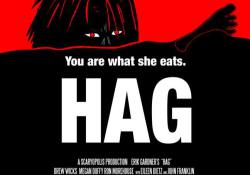 Next up is Hag. Written/Directed by Eric Gardner. Scott (Drew Wicks) & Marie (Megan Duffy) Somers are a loving married couple with a problem. Marie tends to sleepwalk at night, waking Scott up from a sound sleep. Slowly his nightly bouts of being awoken by his wife turn into a serious case of sleep paralysis for Scott, but he doesn’t know that his wife is harboring a terrible secret that just might kill him in the end. This one delivers the goods! It’s well shot with a smart & creepy script that kept me on edge. Of course I won’t divulge the secret, but the title should tell you something about what’s really going on here. Great acting from Wicks & Somers helps sell the premise, and there’s a truly unnerving appearance here by Eileen Dietz (The Exorcist) that will send a chill or two down your spine. Well worth a watch! 4 out of 5 shrouds.

The next short is an animated one called Monster Man. Written/Directed/Animated by Frank Sudol. If any of you are familiar with an animated film called City Of Rott from 2006, then you know what you’re getting here. It’s an inconsequential short about a man who loses his friends to a rampaging monster, and the little old man who says he knows how to kill the monster. The animation is pretty bad, and the joke is pretty worn out as well. It only runs about 3 minutes or so, but it’s a loooong 3 minutes. .5 out of 5 shrouds.

Those interminable 3 minutes are followed up by House Call. Written by Dick Grunert. Directed by Graham Denman. A disturbed man (Sean Keller) shows up at a dentist’s (Ruben Pla) house in the middle of the evening, brandishing a pistol and demanding to have his teeth pulled because he believes he’s turning into a vampire. There’s a bit of characterization going on here which makes this one a bit deeper than most of the other shorts here. The setup is nicely executed, and both Keller & Pla do very good jobs essaying their roles. Director Denman keeps his camera active, never static, which helps move things along nicely, and the final shot is quite funny and ironic at the same time. This one is a winner! 4 out of 5 shrouds. 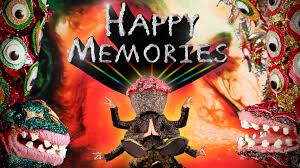 Now we come to Happy Memories. Written/Directed by Jack Fields. I really don’t know what to say about this one other than it’s a very abstract, near experimental, short that features both puppetry & stop motion animation. I think the official synopsis of the film describes it better than I can: A cupcake is born from a monster. It is exploited and tortured by a series of terrifying beings. It is torn from the prenatal pastry world, experimented on by 12-dimensional Mathuloxes, and transformed into a new being, perpetuating the cycle of pain and wonder. And there you have it. It’s about a freaking cupcake that has some growing up issues to deal with. I literally have nothing to say about this colorful, but back assward short film. 1 out of 5 shrouds. 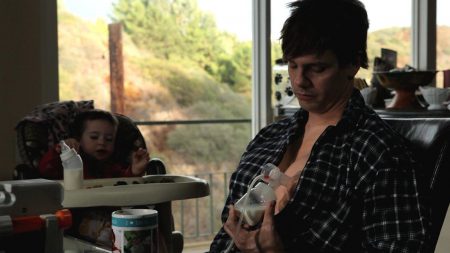 Stay At Home Dad is up next. Written by Cody Goodfellow. Directed by John Skipp & Andrew Kasch. Steven (Matthew Currie Holmes) & Brenda (Alicia Seaton) are a young married couple with a newborn child. Alicia has just been offered a great job that can support the entire family while Steven can be a stay at home dad with their new daughter. But Brenda has a problem with not being able to breast feed her new daughter if she takes the job. But Steven has a solution! He finds out about a new experimental treatment that will give him large female breasts and help him develop breast milk so that he can feed the child as his wife works. At first Brenda is skeptical, but Steven goes ahead with the procedure anyway, and he suddenly has a pair of very large breasts filled with milk! The situation works out just fine although Steven does become a bit tired after awhile from having to feed his new daughter every couple of hours or so. But Steven doesn’t know that Brenda isn’t exactly who she seems to be. And neither is his new daughter. This one starts out all crazy but soon becomes fairly involving and interesting because I had no idea of how it would all turn out. Sadly, the finale that Goodfellow came up with is a bit underwhelming and dumb. But it’s still pretty enjoyable for the most part, and also just a tad repulsive. Excellent make up FX by Mark Shostrom. 3 out of 5 shrouds. 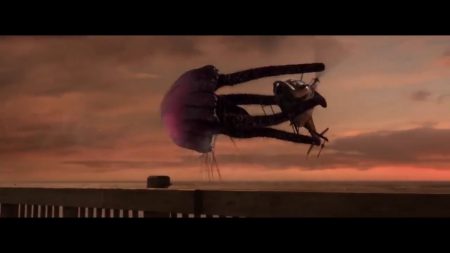 The next (& last) entry is called Hellyfish. Written by Kate Fitzpatrick & Patrick Longstreth. Directed by Robert Mclean & Patrick Longstreth. A long missing nuclear bomb begins to leak radioactive material off the coast of Tybee Island in Georgia. This results in the local jelly fish population suddenly becoming sentient, gigantic and hungry! The rampaging jellyfish rise from the water and begin to feast on the people on the beach as the young Russian spy (Agnes Asplund) who was trying to retrieve the bomb for her country fights back with an oversized rocket launcher! Yeeah, it’s as silly as it sounds, but it’s pretty cool and fun to watch. The CGI on display isn’t first rate, but it does a good job regardless. The Jelly fish come in all sizes as well, they range from normal to the size of a building – and they’re all extremely vicious. This one feels more like a effects demo than anything else, and it has no true ending either, but it works as a fairly rousing entertainment anyway. 3.5 out of 5 shrouds.

Monsterland ends back at the theater, with our hapless survivor suddenly realizing that he’s not really alone. Suffice it to say that it doesn’t end well for him, but it sure ends abruptly. Overall Monsterland doesn’t feel as cohesive as Zombieworld did, and that’s a problem. Zombieworld had more winners than losers in its mixed bag of delights while the opposite holds true for Monsterland. But that’s pretty much the case for all anthologies, isn’t it? But you could do a lot worse than Monsterland on a quiet Saturday night if you keep your expectations low and your supply of alcoholic beverages high.