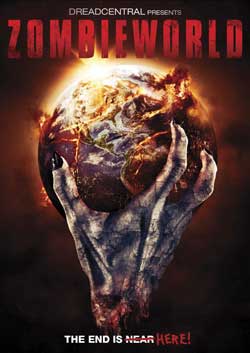 The world is being overrun with zombies, and a lone news reporter is trying to stay on the air long enough to report on the atrocities that are going on around the world

I can’t say that I’ve seen too many anthology films that feature zombies in every segment. Actually, the only time I can remember seeing something even remotely similar is a film called Zombiethon (1986) – and that was just a collection of trailers featuring zombies. But here comes Zombieworld to remedy that barely thought of situation! Starring the hardest working genre actor in the business, Bill Oberst Jr., it’s a collection of short films that tell stories of zombie mayhem from different spots around the globe. Oberst Jr. plays television anchorman Marvin Gloat of K.P.R.S., and he’s on the air as zombies are overrunning the globe. Gloat uses news feeds from all over the world to tell the stories that make up the film, director Jesse Baget takes care of the newscast segments, and the film uses shorts from different directors to make up the rest of the film.

The first segment is called Dark Times, and it opens in a field at night with a group of people running for their lives from what looks to be a nuclear meltdown or something very similar. Shot in first person perspective, it’s pretty haphazard, but it does have a kinetic energy to it that makes it kind of exciting. As the people are running away, zombies suddenly show up and start to decimate everyone on screen, but some people fight back. But they eventually run into something really large, something with more than two arms, something that’s really really hungry. Sadly, the segment ends just as it’s really starting to get good, but it’s a good way to start the proceedings off regardless. 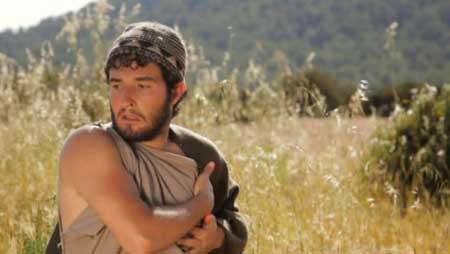 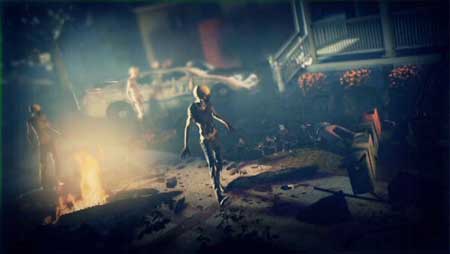 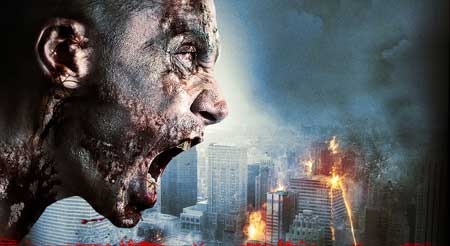 We then return to Marvin, who proclaims that “The human race has had its day. Now we’re living in…Zombieworld“. He then takes us to some footage of the first recorded zombie attack, recorded 2000 years ago! We’re then treated to directors Adrian Cardona/David Munoz’ short film, Fist Of Jesus (2012). I’m very familiar with this one, but I think it’s hysterical fun regardless. Featuring Marc Velasco as a zombie killing Jesus, and Noe Blancafort as his sidekick, Judas – it’s a wonderfully gory & splatsticky bit of nonsense. Our zombie killing duo are up against Roman zombies, Nazarene zombies, even cowboy zombies (complete with six shooters)! And their only weapons are the fish that Jesus magically keeps pulling out his tunic (he even has a swordfish & a piranha up his sleeve)! If you frequented any film festivals over the last few years, you might’ve seen this already (it’s even available to watch on YouTube), but it’s so good that I can watch it repeatedly. It was supposed to lead to a feature film entitled Once Upon A Time In Jerusalem, but I have no idea if that’s any closer to fruition as of this writing. 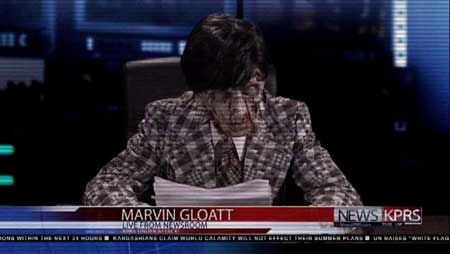 Marvin then shows us the first part of a PSA called How To Survive A Zombie Apocalypse. Directed by Verdan Marjanovic Wekster, it’s a tongue in cheek look at surviving in a world ov
errun with zombies. Part one features a young lady figuring out how to tell the difference between humans and zombies, and ends with the city she escaped from getting nuked! It’s a slight, but good looking diversion that sets up part two nicely. 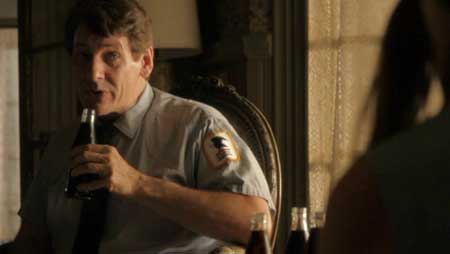 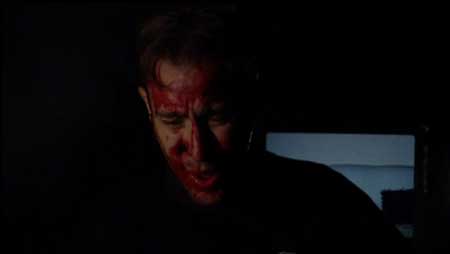 Then Marvin shows us a feed from Ireland, called I Am Lonely. Directed by Phil Haine, it’s the story of Chris (Matt Prendergast) and his dead roommate, Steve (Chris Spyrides). It seems that Steve has killed himself because he couldn’t face living in a world overrun by zombies, but after listening to Chris prattle on about the adventures he shared with Steve, you get the idea that he’s something of a pain on the ass. After a few minutes of listening to himself talk, Chris finds a suicide note in Steve’s hand – and he discovers exactly why Steve killed himself. The set up here is pretty decent, but the payoff is somewhat less than satisfying. It isn’t especially gory either, with only two poorly made up zombies representing the zombie apocalypse.

Marvin comes back to take us to a live feed taking place just a few blocks away from the K.P.R.S. studios! Directed by Tommy Woodard, and called Dead Stop (2011), it’s the (quick) story of a policeman (Trevor Snarr), who comes to the aid of a hysterical woman (Lauren Brady) in a car at a gas station. As he’s trying to get her story, she’s attacked by a zombie in the back seat that the cop promptly shoots dead. But his shots only lead to a group of zombies bearing down on him, and he’s summarily attacked and eaten as he tries to radio for help – that’s pretty much the long & the short of it. There isn’t any kind of payoff to this segment, it feels like filler and nothing more. But it does look pretty nifty, I guess that should count for something.

Marvin returns to alert us that zombie cows have begun to feed on humans before taking us to Australia for a short called Home (2010). Written/Directed by Cameron McCulloch, it’s all about a solitary woman living in a farmhouse somewhere in the outback. She ventures out to kill zombies during the day, before returning to her home at night, where she silently laments her existence as she looks at pictures of her deceased husband – or is he really deceased? She’s trying to hang on to what’s left of her humanity, and this near silent short does a good job of portraying her loneliness. Jamie McDowell plays the young woman with just the right amount of pathos to make the audience truly feel for her. The ending is kind of telegraphed early on, but it’s still a fairly effective way to end this segment.

Marvin then returns to pay tribute to his fallen colleagues before showing us the second part of the How To Survive A Zombie Apocalypse PSA. It deals with the “New Breed” of zombie that’s faster, stronger and smarter than the zombies we’re used to seeing. Luckily, these zombies can still be taken out if you’re resourceful (and happen to have a bicycle seat handy). We also start to notice that Marvin is beginning to look a bit on the weak side as he introduces us to a segment from Canada called Dead Rush. Directed by Zachary Ramelan, it’s about a group of people on the run from zombies that’s also told from a first person perspective. Pretty much nothing happens in this segment that’s very unique. The group runs to a car, the car runs for awhile but then stalls, they shoot the one female in the group because she’s been bitten, they find a house to hide in and tell each other what they want to do before they die, the zombies overrun the house, one of them gets eaten while the other two jump out of a window to escape, but one of them breaks his ankle as he lands so he gets eaten. He then rises up a few minutes later, and all he wants to do is find his friend who left him to die. He does, he bites him, end of segment. It’s pretty rote and offers nothing new or especially original to the proceedings. It feels more like an experiment with shooting in a first person perspective more than anything else. 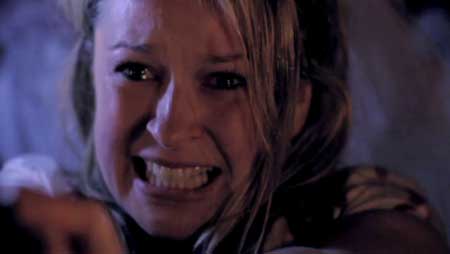 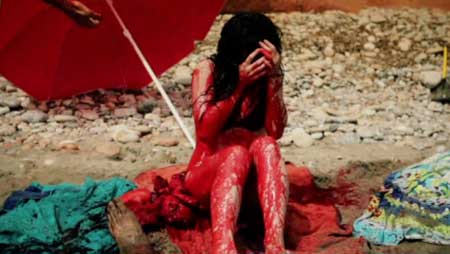 K.P.R.S. is having some technical difficulties, so we go straight to the next segment. Written/Directed by Paul Shrimpton, Teleportal is about a man playing a very realistic video game featuring zombies. As a matter of fact, it’s so realistic that the man playing it goes inside of it right through his television screen! Once inside of it, he finds himself surrounded by the same hungry zombies he was shooting at from the other side of the screen a few seconds earlier. And just as the zombies start to tear him to shreds, he sees a young lady shooting at them – from the other side of the screen. Sort of a take on The Video Dead (1987), with better looking zombies, it might make for a decent full length feature one day.

When we return to Marvin, we find that he’s nearly a full fledged zombie now. But despite his immediate situation, he proclaims that “The Show Must Go On“, so we go to a feed from West Virginia. Written/Directed by Luke Guidici, Certified (2011) is about a mailman (Thomas Garner) happily delivering mail on a old country road in 1950’s rural America. He has a certified letter that must be signed for, and is greeted at the door by a young girl (Rebecca Spicher), that has a very creepy tale to tell him regarding a tragedy that befell her family. It’s the least “Zombie-ish” part of the film, and is played more for laughs than outright scares. Sadly, it fails in that regard as well, but like every segment in Zombieworld, it looks really nice and is well acted. It’s just a bit too tongue in cheek for me though, and it feels out of place here. 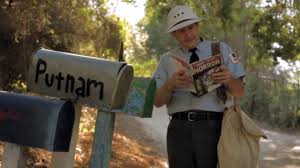 The film goes directly to the third and final segment of the How To Survive A Zombie Apocalypse PSA, before going into it’s last segment. Once again Written/Directed by Adrian Cardona/David Munoz (along with Rafa Dengra), Brutal Relax (2010), is the story of Mr. Olivares (Jose M. Angorilla), a man whose just recovered from some psychological issues. His doctor’s advice is to take a nice, quiet vacation somewhere peaceful and relaxing. So he decides to go to a nice beach side resort, and all goes well initially. The beach is full of happy people, enjoying the sun/surf and Mr. Olivares contentedly rubs himself with mud from head to toe, as he listens to some music on his walkman. But then, an army of green zombies rises form out of the ocean and begins to decimate the vacationers! They literally tear everyone apart (it’s the most violent segment of the film by far), but don’t seem to notice Mr. Olivares – and he doesn’t seem to notice them either…until the batteries on his walkman run out – then he gets pissed! He then runs to the beach and begins to eviscerate each and every one of the marauding monsters, in as violent a manner as you can imagine! At one point, he even picks up a dead baby and uses it to club zombies over the head with! It’s so gruesome & ridiculous that you have to laugh at it, and Angorilla makes a perfect foil for the creatures. It has a really funny ending to it as well, and it’s easily the best segment of the film overall. 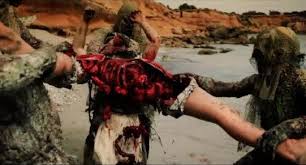 Zombieworld ends with Marvin, completely turned into a zombie now, looking into the camera and hungrily growling. He then attacks Bob, his cameraman, as zombies watch from televisions around the world. Endgame – the zombies win! While Zombieworld isn’t going to win any awards for originality, it is entertaining and it does what it sets out to do most efficiently. It’s not very frightening, but I’m pretty sure that the more timid amongst you will be creeped out during certain segments. It is pretty funny though, and I wasn’t expecting that at all. Take a trip to Zombieworld – you might enjoy yourself a lot more than you expect to!